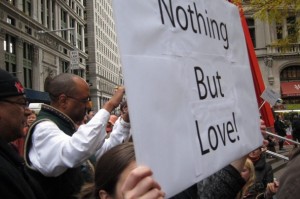 The following is a guest contribution. Reuters is not responsible for the content and the views expressed are the authors’ alone. Katherine Clark is Program Consultant at the Interfaith Center of New York.

A small group of diverse religious and community leaders gathered in Zuccotti Park this past Sunday to lead an interfaith service at Occupy Wall Street. Organized by staff at the Interfaith Center of New York, we had asked the participants – representing Christian, Jewish, Hindu, Muslim, and Sikh traditions — to meet on Zuccotti’s northeastern steps for the afternoon service. These services have been taking place at the park in Lower Manhattan every Sunday for the past few weeks, so we thought we could easily meet up by the Interfaith Center sign there.

It was not so easy after all. Upon arriving, we saw tha t claiming a spot amidst the abundance of tents and other Occupy activities would require a tremendous amount of patience and creativity. Our sign was lost amidst notices for the community library, the “basics of anarchy” pamphlet table, a laughter yoga session and a gentleman sporting a multi-colored outfit and sign proclaiming, “Outer Space or Bust; Goodbye Earth People.” Eventually, however, we found one another. Within a few minutes, an interested crowd gathered on the steps. Our makeshift sacred space began to take shape.

Hindu monk Rasanath Das opened the service with a standing meditation, providing a rare moment of peace amid the clamor of surrounding mic checks, drums, chants and street noise. The meditation set the tone for an inspiring service that featured leaders from a variety of faith traditions – Rev. Dr. Traci West (United Methodist), Dr. Tejal Kaur (Sikh), Rev. Earl Kooperkamp (Episcopalian), and Annie Rawlings (Presbyterian) — each of their messages being amplified through the “human microphone.” Since real amplifiers aren’t permitted in Zuccotti Park, speakers at Occupy Wall Street to deliver their message in succinct sentences that the surrounding crowd repeats, allowing a wider audience to hear.

West read portions of the Song of Mary(“Magnificat”) and reminded us of the harmful impact that economic injustices have on women, particularly women of color. Kaur shared a story of two ideals in the Sikh faith “which are inherently American: first, to earn an honest living; second, to give back to the community.”  Kooperkamp preached about anti-apartheid hero Father Michael Lapsley’s recent visit to an Occupy Faith meeting at Judson Memorial Church on nearby Washington Square and proclaimed Father Lapsley’s message to the movement: “The world is learning from the example of Occupy Wall Street; Occupy Wall Street must learn from the world.”  And Rawlings offered a closing blessing, urging us to not meet evil with evil, but with compassion and courage.

Woven as a refrain throughout the service, Derrick McQueen, a Ph.D student at Union Theological Seminary on Manhattan’s Upper West Side, led the group in a simple song adapted from a sermon at a previous Occupy Wall Street interfaith service by the Rev. K Karpen of the United Methodist Church of St. Paul and St. Andrew, also on the Upper West Side:

What should occupy your soul?

What should occupy your mind?

It was an eclectic mix of meditation, preaching, prayer and song, with no attempts to dissolve diverse traditions into a single prophetic message.

Ever since the Occupy movement first captured the media’s attention in September, there has been continual focus on its unwillingness to settle on a list of concrete and unified demands. Many outside of Zuccotti Park have criticized this as a weakness. It is not.

Like those encamped for the past two months, religious leaders and individuals involved in the interfaith movement have long understood that expressing common moral concerns about poverty, homelessness, domestic violence, environmental justice, unemployment or lack of health care does not require a single perspective about the best way forward. Interfaith services are not about proclaiming a single theological vision, lifting up a particular sacred text as the only truth, chanting a single mantra or praying in only one way. They are about creating space for theological, moral and spiritual differences to coexist in solidarity with one another in a respectful AND meaningful way.

Some 36 hours after our interfaith service had concluded, the New York Police Department (NYPD) evicted everyone from Zuccotti Park. The space was vacant for the first time in two months. There are those who hope that this movement is based solely on geographical location and that dispersing protesters and dismantling their tents will have the same effect on their ideals.  This is not the case for the Occupy movement, or for the multi-faith leaders who stand in solidarity with it. To quote countless Twitter feeds since Tuesday morning, “you cannot evict an idea whose time has come.”