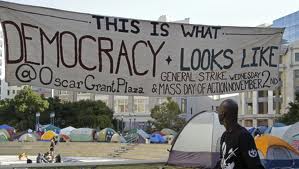 During the eight hours I spent in the Glenn E. Dyer Detention Facility in Oakland, I had a lot of time to think as I sat in a concrete cell and watched my seven other Occupy Oakland female cellmates sleeping on the cold, hard floor.

Until Wednesday last week, members of the “Interfaith Tent at Oakland” — the name of a space as well as an identity — had worked hard to stop a second police raid of the encampment. Those and other efforts failed, and we faced the fact that an eviction was inevitable. We appealed to city officials planning the raid for a different approach to an eviction, instead of the violence and vicious destruction of people’s property that characterized the first raid on Oct 25. We got no guarantees.

A few of us met to discuss what nonviolent resistance to eviction would mean. We faced honestly into possible worse cases. Could our small group make any difference if a raid came? Could we calm fears and help ground those who wanted nonviolence? We knew many in the Oakland encampment viewed clergy with suspicion because a large group of the city’s clergy had come out publicly against the camp so we might be regarded as shilling for the corporate machine.

I thought about the level of police brutality we might face if we refused to leave. I tried to imagine standing in front of an anonymous cop in full riot gear with a weapon pointed at me. Could I stand my ground? Would the police disperse us with tear gas, percussion grenades and rubber bullets, so they wouldn’t have to bother with arresting us? I wondered if I would be seriously injured or disabled. I really didn’t know, but I made a clear decision to defend the encampment because my life circumstances made it possible for me to say yes.

Fourteen in the Interfaith Tent at Oakland said yes to arrest. We then met for about 12 hours over the next two days to plan strategies for dealing with worst cases and with arrest. Others in the Tent chose to provide active support outside, and their monitoring of our fate all day made an enormous difference to us as we sat in our jail cell — without those many people, the 14 few arrested could not have made our nonviolent witness. I count our supporters as part of our witness.

One supporter drove over midday Monday to Grant/Ogawa Plaza and was startled to see one tent still standing hours after the eviction, the Interfaith Tent, a witness to the moral force of the 99 percent Movement. Did police leave it because we had declared it sacred space and sanctuary or because they did their job but also felt solidarity with our movement? We’ll never know, but it seemed a miracle that the Interfaith Tent stood for six hours after the raid, the lone witness to justice for the 99 percent.

I chose to defend our Tent, partly for people I love. Among my close family and friends, one person was laid off two years ago and is still jobless, another lost a home to foreclosure, and still another faces forced retirement in poverty.

I also chose arrest for people I do not know. Occupy Wall Street and its sister occupations around the world give visible witness to gross injustice, to cruel, indifferent societies, and to the corporate greed and fraud that has stolen people’s homes and jobs. The occupations say that such human misery cannot continue, and we will not let it continue. In just two short months, the 99 percent movement, with determined encampments in hundreds of U.S. cities, has completely changed the national public conversation from policies that help the 1 percent get richer to policies that tax the rich and reverse social inequality.

I chose nonviolent resistance for strategic reasons. I am not a pacifist, but I am struggling to be a nonviolent person, knowing that virtually everything I do every day in this oil-based civilization causes harm: eating, driving, heating my apartment, using the computer I am typing on right now. In the face of systemic forces of violence, nonviolent resistance forces the hidden violence of the boardrooms and gated communities of the 1 percent to become explicit through the private security forces, police, and politicians who protect their interests. Most people dislike explicit violence and feel sympathy for its victms, so nonviolence is effective at gaining public support for a movement. When the victims of massive injustice strike back with symbolic attacks on property or violence against people, the powerful can pretend to be victims of those they harm.

Nonviolent resistance denies success to agents of law enforcement who are undercover as provocateurs of violence. Every successful social movement has had such agents because public opinion turns against movements that they think are violent. As I headed to my car at 9 p.m. on Nov. 2 after being in the lead group that shut down the Port, I walked through downtown Oakland, and my joy became sorrow as I passed spray-painted walls, plywood covered broken windows and workers clearing shattered glass.

Marchers during the Oakland General Strike stood in front of windows and struggled with attackers to stop the destruction of property that erupted, but the story that dominated a peaceful, jubilant, successful day was violence by protesters. Most damage occurred late in the evening after most of the marchers were at the Port or had gone home, when a small group did their work under the cover of masks. Given that some of the spray paint was gang tags, and a video shows one window being kicked in by a middle aged man in casual street clothes, it is not clear that any one group was responsible, but Occupy Oakland in its entirety was blamed.

The night before the Nov. 14 eviction, the Interfaith Tent marked our space of peace, sanctuary and nonviolence with a half circle of candles in front of the entrance. We prayed together, centered ourselves, sat with arms linked and sang a lot of protest songs for most of the three hours between the time the police arrived and our arrests. During that time, protesters stopped to speak to us or thanked us as they passed by. They were having an “Occupacalypse Party,” which inspired us, when the police copters with searchlights arrived, to shout “Occupacalypse Now!”

As the police closed in and the protesters started marching around the plaza, many yelled, “we love you guys! Thanks!” as they passed us. Some told us they were inspired by our witness and that it helped others in the encampment who were practicing nonviolence as well.

I chose nonviolent resistance for strategic reasons, but I also chose it because the values of the 99 percent Movement are deeply moral and grounded in nonviolent resistance. Occupy-Decolonize Oakland took over the Grant/Ogawa Plaza, not with violence, but with tents –the “Decolonize” was voted by the General Assembly at the request of our Native American Caucus who reminded us their land and people here have been occupied for nearly two centuries. We put up our tents to expose, relentlessly, the massive inequality and corporately corrupted politics that have nearly destroyed democracy in the U.S. and killed thousands through hunger, homelessness, untreated sickness, police brutality, wars for oil, financial fraud, environmental destruction, a government bought by the 1 percent, and lack of police protection.

Thousands of years ago, a people escaping the horrors of slavery in Egypt took up residence in tents as they journeyed toward freedom. They later conquered and colonized a land they claimed as their own, which is again today contested, occupied territory. Half a millennium ago, Europeans set sail for a new land, claiming they had “discovered” it, and while pretending it was largely uninhabited wilderness, they too killed native peoples, enslaved people for labor, and colonized the land as a resource for their wealth, calling it “America.”

By re-occupying colonized land, the Occupy Movement may break the ancient imperial pattern of conquest, colonization, enslavement of people, and exploitation of the 99 percent by a 1 percent oligarchy and those who serve them. Occupy-Decolonize Oakland offers tent-testimony to the crises we are facing, but inside the hearts of those in the tents lives a vision of Oakland as a safe, just, peaceful, beautiful, thriving city for the 100 percent and the earth. We will reclaim occupied land for all the people who must live here together, in all our complex, conflicted diversity, and we do this for ourselves and, especially, for the children.

The promise of the 99 percent Movement, inspired I think by the Iranian Green uprising and the Arab Spring, and its successes in just two months grounded my decision to accept not only arrest, but also even the remote possibility of death. I took this risk not to die, but to stand for what I have already experienced in this movement and what I am confident it will achieve, whether I live or die. And I stood in very good company, not only with the few who were arrested, but also with the many who supported and prayed for us and carried on the work outside.

The OWS Movement’s visible, nonviolent witness of presence to a system of exploitation, systemic oppressions, and misery has now provoked a nationwide attempt by city mayors to remove us. We know what city officials and corporate powers do not understand: they cannot remove us or stop this movement.

Egypt has now marched for Oakland, and we have marched for Egypt. We will keep coming back with our nonviolent witness against the principalities and powers that grind people’s lives to dust. We come back every time with more people. We have nowhere else to go; the whole world has occupations. God bless them all.