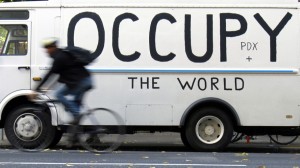 Written by the Rev. Ken Locke

The worldwide “Occupy” movement is all over the news. Sit-ins, protests and clashes with the police are common.

While many have been quick to jump in and either support or condemn the movement, I have noticed that voices from the church have been rather quiet. My belief is that this is because it is embarrassing, especially for my fellow clergy. Frankly, they are making us look bad. With little organization and no training, they are doing something we Christians are clearly not doing very well.

The Bible’s consistent message is that God cares deeply for everyone, including the poor and powerless. And when the poor and powerless are mistreated, God gets quite irate. Speaking for God, the prophet Amos denounces those “who oppress the poor, who crush the needy” (Amos 4:1). He lambasts those who “trample on the needy, and bring to ruin the poor of the land … buying the poor for silver and the needy for a pair of sandals” (Amos 6:4, 6).

In the Gospels, Jesus declares that while the rich may have a good life now, it is poor Lazarus who sat outside their gates, was chronically ill and had only dogs for company, who will live in paradise (Luke 16:20 ff). The pregnant Mary is so sure of what Jesus is going to do that she speaks as if it has already happened. “He has shown strength with his arm; he has scattered the proud in the thoughts of their hearts. He has brought down the powerful from their thrones, and lifted up the lowly; he has filled the hungry with good things and sent the rich away empty” (Luke 1:51-53).

My firm conviction is that these Occupy movements, touched by the Holy Spirit, are powerfully drawing the world’s attention to the growing disparity between the rich and the poor. On behalf of the powerless, they are speaking truth to power: It is obscene that only a small number of people control such vast sums of wealth. It is wrong that our legal and economic system is making it possible for a small number to continue getting richer while more and more are finding themselves unemployed, uninsured and foreclosed on. It is indefensible that for lack of relatively small funds, the price of a pair of shoes, children have to sleep in the family car and then get up and go to school the next day.

In other words, they are spreading the message that we, the church, should be spreading.

Understand that I have no great desire to join the Occupy movement. I have spent too much time sleeping on hard, cold ground. I do not enjoy being surrounded by unwashed mobs. And I have no doubt that many of the occupiers are not acting out of noble conviction. The thefts and other incidents are ample proof that not everyone in the campsites has visions of egalitarian utopianism running through their heads.

But while I personally don’t want to take part, I do have to recognize that they are spreading a message that deeply reverberates with the Bible, and that they are drawing a lot more attention to it than my own preaching ever has.

So I say to the Occupiers, you have my blessings and my prayers. If I can offer you support please let me know. Thank you for shouting out the message much louder than I have ever been able to. And please forgive me, forgive us all, for letting things get so out of hand that you have had to take up the message yourselves. You are unlikely prophets, yet nevertheless, may the Lord bless your ministry and show me a way to be a part of it.