The congregation of First Presbyterian Church United (FPCU) in Syracuse, N.Y., is living in a conundrum of sadness and grief, anticipation and wonder. “People who only know church in a traditional way are in pain,” says Nancy Wind, associate for Congregational Life, “but there’s also a sense of excitement  that God is responding to our longing to do church in a new way.”

In the fall of 2011, 18 FPCU congregational leaders began studying together Starting New Churches, a resource produced by the Office of Church Growth of the Presbyterian Church (U.S.A.). During one of the sessions they read together Acts 16:9–10, where the apostle Paul has a dream of a Macedonian man asking for help. They were asked to pray over this question: “Who are the Macedonians in your community?” Ultimately leaders “felt God calling them to feed the hungry,” says Marianne Rhebergen, transitional presbyter at Cayuga-Syracuse Presbytery.

Worship and exist to feed the hungry

Wind remembers the laser-like focus and clarity they received—focus fully on the new thing God was doing through them in their community. Their vision began taking shape a year earlier in the fall of 2010. The church needed a major change and a new direction. Kids from the neighborhood were coming to Sunday school without their parents. They were hungry. So the church decided to put out a sign that said, “Come to breakfast.’ We wanted to make sure any kids who came had a full stomach before Sunday school,” says Wind. “We thought maybe some of their parents might come, but God had another plan!” That first week only a few children came. “It was mainly adults in economically challenging circumstances, including four homeless men. It certainly wasn’t who we expected or necessarily wanted. But we felt the Holy Spirit urging us on, saying, ‘It’s okay.’”

Leaders plan to build a new worshiping community around breakfast, pray and song, and will keep their food pantry open to honor new mission initiative of feeding the hungry in their neighborhood.

As the congregation did their best to trust God by getting this new breakfast before Sunday school off the ground, they decided to go through a “New Beginnings” assessment. This church growth ministry tool is designed to work with congregations in the latter stages of their life cycle. When assessor and church growth coordinator Philip Lotspeich came in November, there were about 15 neighbors and 15 church members having breakfast together every Sunday morning. “Typically that would have had us crazy nervous,” says Wood. “But we were beginning to feel joy.”

The “New Beginnings” assessment helped FPCU begin to make sense of what new thing God might be doing by looking closely at their financial and spiritual health, the changing demographics in their neighborhood, the potential resources they had for ministry, and their own potential for change. “‘New Beginnings’ really helped them get unstuck,” says Rhebergen.  “They had been in the discernment process for 15 years. Now a strong voice was saying together, ‘We don’t want to be church just to keep the buildings and care only for ourselves.’”

Congregational leaders no longer wanted to be church just to care for themselves. 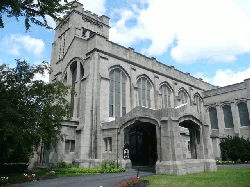 In the spring of 2011, after the “New Beginnings” assessment process concluded, the church’s session made a difficult but bold recommendation: First Presbyterian Church United, which was gradually going to run out of money due to rising building costs, budget deficits, and lower membership should close and use any remaining assets to start a new worshiping community. The congregation voted to dissolve in October of 2011. During this time, Rhebergen says a Scripture passage from Isaiah 43:18–19 spoke to leaders: Do not remember the former things, or consider things of old. I am about to do a new thing; now it springs forth, do you not perceive it? I will make a way in the wilderness and rivers in the desert.  “They were beginning to understand that God was making a way in the wilderness and streams in the desert of both their church and their community.”

Partnering for economic development in neighborhood

Elder Laurel Morton teaches fashion design at Syracuse University in a building that overlooks her church and neighborhood. “From the seventh floor window I can see our church and neighborhood and all that divides it: the train track, the elbow of highway 690 (where some of the homeless sleep). This leads to economic and social divides.”

Syracuse University has helped fund the Near Westside Initiative, which FPCU has joined as community partner.  The growing business association hopes to bring economic development to the neighborhood. “One of the things I feel strong about,” says Morton, “is that we grow people together by growing things. Everyone agrees that we will keep our food pantry—a long-time ministry of the church—open. We hope to hang on to some green space and build a worshiping community around the breakfast we are doing with prayer and song.  ”

First Presbyterian Church United has a strong history of doing new things. They were the first PC(USA) congregation to ordain a woman pastor, and in 1990 they merged with another Presbyterian congregation. “Historically we have struggled for freedom, to do something new,” says Morton. “We need our neighborhood, as God meets the needs of a new population through us, in our community.”

FPCU’s final worship service will be Easter Sunday.  They will hold a celebration service of their 175 years of mission and ministry on the first Sunday in May.  Even as they close, Rhebergen says, “their mission initiative and worshiping community is going to become an instrument of God’s redemption in their neighborhood.”