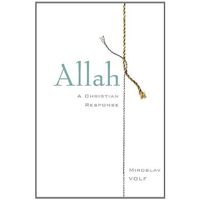 ‘ALLAH: A Christian Response’ by Theologian Miroslav Volf Offers a Provocative Argument that Muslims and Christians Worship the Same God

3.6 billion people, the majority of the world’s population, profess Christianity or Islam. And while it has long been an uneasy coexistence, the post-9/11 world has seen tensions rise as both sides of the divide seek to see only differences, or to unduly emphasize similarities.

In ALLAH: A Christian Response (HarperOne; March 2011; Hardcover), renowned scholar and Yale Divinity School professor Miroslav Volf makes the bold claim that Muslims and Christians actually worship the same God—the only God. Going even further, he reveals that a person can be both a practicing Muslim and an active Christian without denying core convictions. As he explains, warriors in the “clash of civilizations” have used religion to divide and oppose, failing to recognize the one God whom Muslims and Christians understand in only partly different ways.

Writing from a Christian perspective, and in dialogue with leading Muslim scholars and leaders throughout the globe, Volf reveals surprising points of intersection and overlap between these two faith traditions; he also explains the hidden agendas behind various sources—from today’s news stories to text straight out of the Bible and the Qur’an—in search of the fullest picture of where these faiths diverge and where they meet.

Religious wars become real wars, Volf argues, and enormous contemporary interest in the theological and historical intersections of Islam and Christianity reflects just how much is at stake. Persuasively argued and expertly researched, ALLAH offers a constructive vision for a new pluralism and hope for building a common future.

About the Author
Miroslav Volf is the Henry B. Wright Professor of Systematic Theology at Yale Divinity School. His previous books include Against the Tide: Love in a Time of Petty Dreams and Persisting Enmities (2010) and After Our Likeness: The Church as the Image of the Trinity (1998), winner of the Christianity Today book award. A native of Croatia, he regularly teaches and lectures in Central and Eastern Europe.

“Not everyone in America is aware that Allah is simply the Arabic name for God and is used by not only Muslims but also Christian Arabs. Professor Volf has rendered great service to the cause of mutual religious understanding and also peace in demonstrating in a clear, convincing and accessible language the fundamental truth that Christians and Muslims worship the same God.” — Seyyed Hossein Nasr, author of Islam in the Modern World

“Central to Volf’s book is one basic point, namely that Christians and Muslims worship the same God, however differently they may respond to that deity. In bold and carefully reasoned arguments, Volf shows how this awareness of common beliefs can and must form the basis for all future dialogues between the two faiths. His work is as convincing as it is lucid.”
— Philip Jenkins, author of Jesus Wars

“Miroslav Volf is a theologian who shows that theology is not just about reflecting on the world, it is essentially about mending the world. In Allah, he has shown courage in taking his fellow Christians on a personal, political, and theological journey which begins and ends with the exploration of God who Volf concludes is the same for Christians and Muslims, albeit understood in different ways. A controversial but absorbing and accessible read for both Christians and Muslims.” — Mona Siddiqui, professor of Islamic studies, University of Glasgow
“It’s hard to imagine a question more inflammatory and sensitive than the one Volf engages in these pages. And it’s impossible to name any Christian leader better suited to grapple with it. Even those who disagree with his bold answer, if they read with an open mind, will be stretched and deepened as they read. And those who in the end agree will be equipped to be wise peacemakers in a world too full of burning fuses.”
— Brian McLaren, author of A New Kind of Christianity and Naked Spirituality

“Volf has long been one of our most faithful and engaging commentators on the Christian faith. In this quite wonderful book, Volf places our Christian knowledge of God in respectful, compassionate, intelligent conversation with Islam. I’ve read many attempts to think like Christians about Islam. This is the best I’ve read. Volf wonderfully explicates Islam in a way that demonstrates the best of Christian thought about God.”
— William H. Willimon, bishop, the United Methodist Church

“Most books on the critically important current encounter between Christianity and Islam focus either on the cultural or political area. A few discuss the religious and theological issues. But Volf’s book brilliantly addresses all these dimensions in their intricate interconnection. Futher, he skillfully weaves in his own personal experiences as one of the principal participants in this epochal dialogue. The result is a wonderfully readable and informative intellectual and spiritual treat that helps bridge a gap that must become a conversation and not a ‘clash.’” — Harvey Cox, Hollis Research Professor of Divinity, Harvard University, and author of The Future of Faith