I was part of the Multicultural Churches Conference of the Presbyterian Church USA) in Chicago: H20: Deepening our Faith, Widening our Culture. I wish we could have gathered downtown so that we could have enjoyed Chicago. I went there for an afternoon and I saw the dynamics of a fascinating city in the summer. The church attempt for a “multicultural church” is a great hope to gather people from all over the world and make this essentially white church become more diverse, plural and multi-ethnic. A very hard attempt.  The conference was great with wonderful speakers and good workshops called streams. I met wonderful people and left with many good stories.

As I look back now, I guess I am skeptical about the ways in which the church goes about its diversity. There are wonderful and diverse things going on in many places around the church throughout the country but the main thing for me is the tokenism with which diversity is still understood and practiced (if ever) in our churches.  The problem comes from the very understanding of multiculturalism that can turn our fight for diversity into a tokenism enterprise.

Multiculturalism were supposed to open up space for difference but can be used as well by the system to allow the fringes to dance a little bit and give the outsiders the impression that they are finally part of the center.  If you offer an office, some money and few places for dialogue, you can make everybody feel that the church is getting there. But this is an illusion and we become happy to live under this illusion of diversity. After the conference, there was a wonderful sense that indeed we are many from many places together worshiping and together living.  That feeling itself is worth all the work our leaders do!  However, the structures of power and sameness are all still in place and we continue to fight for diversity of practices without much success.  I think the approach is not helpful.  While people at the conference fight for worship without bulletin or for global songs in the liturgy, as exemplified by the comics in one of our evenings, the whole system does not and will not share power,  which is at the very core of becominga  diverse church.

Power is still well protected, class divisions are still in place, race discussions are kept at bay.  Thus, if churches are to become cosmopolitan, a better term I think for this conversation, we will have to engage in more difficult and structural issues such as racism, classism, sexism and patriarchy, issues hard to be taken even within the groups that are part of this conference.  Also, along those issues, we need to learn how to live together, learn who we are, what we need and change our ways by listening to each other and opening up possibilities for more structural changes.  In a conference of so many immigrants, no discussion of immigration was done! Incredible! How can we struggle for inclusion if we don’t discuss what matters the most for this people? Only after we engage into these rather difficult things we will be able worship together. Only when we spend time living with one another we can become a beloved and diverse community of God.

Multiculturalism and politics of identity can also establish, unconsciously but not unintentionally, small groups into a power struggle within themselves to see who will control the crumbs that fall from the table. For instance, Hispanics fight within themselves to see who will get more space, Brazilians wanting power identifying themselves as Hispanics but never considered as Hispanics by the Hispanics themselves since they don’t speak Spanish; Africans who arrived early in US claiming more authenticity than those who are arriving later; South Koreans cloistering themselves against “other” Asians and so on. These internal fights give reason for the powers that be to continue to say “see, they can’t even get along with themselves, why should we listen to them seriously?”

If we take a hard look at the churches today, we see that women are not yet in power, African Americans are still a very minority, immigrants struggling to find their ways around white churches, and seminaries continuing to be a place where the same generational, class and ethnic white group is holding power control. So the multicultural conference belongs to this much larger and complex realities.

Pretty soon the United States will not have any single majority forming its population and the way around it will be a constant open platform for dialogue, sharing life and engaging into strange relations. Today, we learned that the Hispanic population is larger than the African American population and that shift brings huge challenges for our society, be it around governmental participation and resources, and issues related to jobs, education, economic structures and social relations. Some radical groups are already trying to place one group against the other, see the add below. 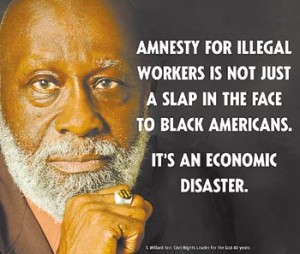 The same way, if the church as a whole, including the white sisters and brothers, does not engage deeply into a discussion of our own structures of power relations and strategies, small groups will keep fighting within each other and we will explode our possibilities for growth and newness in our common life in God.  Unless we engage into these deep dialogues, and become serious even to disagree, we will end up being happy if we can do prayers in different languages, use tortilla for Eucharist, sing global songs once in a while and worship without bulletin. Without knowing, we will be fighting for tokenism and end up being happy tokens. Global worship and cosmopolitan churches are way more than that!

We ought to do more than that! And we can!! This text does not want to diminish the great work of the people who put together this conference and are out there fighting the good fight. On the contrary, it hopes to flash a light around risks we run by talking about multiculturalism within a structure that does not want much change and let us have our space so that everything will be kept in the same way. This text might be a call for other frontiers, as we avoid letting multiculturalism make us a token of difference so that the larger church can keep going about what “really matters.”

May God help us!

One thought on “Multiculturalism and Churches”