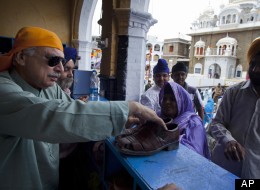 HASAN ABDAL, Pakistan — Thousands of Indian pilgrims barely registered the man in the orange bandanna and Ray-Ban sunglasses taking their shoes and storing them in wooden cubbyholes before they entered the Sikh shrine in this town in northwest Pakistan.

The unassuming 62-year-old tending to the shoes is a top government lawyer and devout Muslim. At the shrine, he is on an unusual solo quest – taking on menial jobs to atone for the beheading of a Sikh by Islamist militants.

Over the past two years, Muhammed Khurshid Khan has traveled to Sikh shrines in Pakistan and India, volunteering to polish shoes, clean bathrooms, cook meals and do other chores. Such service is known as “seva” – selfless service – in Sikhism, and it holds a special place in the faith.

Attacks against Sikhs, Christians and Hindus have spiked in Pakistan in recent years as the Taliban and their allies gained strength. Atrocities by Muslim extremists against religious minorities now are so common that they rarely illicit more than routine condemnation by officials, much less collective contrition or shame.

In helping Sikhs, Khan is reaching out to an extremely small minority in predominantly Muslim Pakistan – the government estimates there are 30,000 Sikhs in the country of 190 million people.

“I have a desire to serve the Sikh community because my community has done them serious harm, and that hurts me,” said Khan, taking a break from his work at the shrine in Hasan Abdal, 45 kilometers (30 miles) northwest of the capital, Islamabad.

Khan, one of two dozen deputy attorney generals in Pakistan, began his mission in 2010 after militants kidnapped three Sikhs returning from Afghanistan to their homes in Pakistan. The militants demanded some $240,000 – an amount the families could not afford. Two of the captives were freed in a commando raid, but 30-year-old Jaspal Singh had already been beheaded.

“That news pierced my heart,” said Khan. “How could Muslims do such harm to such a peaceful community?”

A day after Singh was beheaded, Khan went to the dead man’s home in the northwest city of Peshawar to offer condolences. He sat on the floor with Singh’s relatives, but they became wary once they realized Khan was a government official.

Khan then visited a Sikh shrine in Peshawar and asked religious leaders if he could perform seva to atone for the beheading. After two weeks his request was approved, and for the next four months he went to the shrine in Peshawar every day after work, polishing worshippers’ shoes for hours.

Handling the shoes of devotees is considered a particularly worthy form of seva because it shows humility and a belief that all people, rich and poor, are equal in the eyes of God.

“When I was permitted to do seva, that day felt like the happiest day of my life,” said Khan.

He said he initially hid his quest from his family because he worried they would be embarrassed and ask him to stop, but they are now supportive. He also avoided media interviews until a reporter reminded him that Islam tells followers to publicize good deeds as an example to others.

“My message is love and peace,” said Khan, who also visits Hindu temples and Christian churches to reinforce that religious minorities should be protected. “These minorities have been living here for centuries.”

Khan has not contacted the beheaded Sikh’s family since just after the killing.

“We appreciate what Khan is doing because it shows solidarity with the Sikh community,” said Harnam Singh. “It would also be good if someone could provide some help for the family because they are facing serious problems.”

Sikhism was founded in the 15th century by Guru Nanak Dev in the Punjab region of South Asia, which was divided between India and Pakistan in 1947 when the countries gained independence from the British empire. There are about 20 million Sikhs in India.

The shrine in the Pakistani town of Hasan Abdal is revered because it houses what is believed to be a handprint of Sikhism’s founder. This week, there was a festive atmosphere at Gurdwara Panja Sahib, a brick building adorned with arched windows and topped by a large dome. Indians, and some Pakistanis, were visiting as part of a 10-day pilgrimage to celebrate the Sikh new year.

Some worshippers filed in to listen to a religious leader read aloud from the Sikh holy book, the men cutting a particularly vivid figure in their brightly colored turbans. Others splashed holy water on themselves from a pool around the shrine and placed their hand on the founder’s print impressed into a rock. Some children jumped into the pool for a swim, and hundreds of pilgrims ate donated rice and spicy fried snacks while religious music blared.

Khan surveyed the gathering from his perch behind a long wooden counter and said he hoped his actions would highlight the need to protect Pakistan’s minorities.