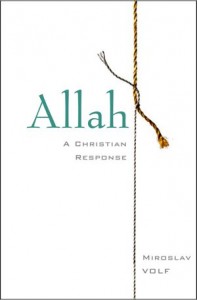 The subtitle of Miroslav Volf’s Allah is the first and best clue to his approach to his subject: A Christian Response. Volf’s book is a pastoral guide to Islam’s God, a work advocating a response to Islam different from the one some Christians have modeled in the public square. Volf, a Yale University theologian and author of the modern classic Exclusion and Embrace, has long been noted for his personal approach to theology, especially to the problem of suffering and religious and cultural strife. Here, he draws on his studies of conflict to chart a new—yet not historically unprecedented—course for interreligious civic life.

I asked Volf about his work on Allah and the tense public relationship between Christianity and Islam.

You say you’re writing to your fellow Christians first and foremost. What do you want your fellow believers to know about Islam?

At the height of the Cold War, when the communist East and the capitalist West were growling at each other ominously, my teacher in Germany, Jürgen Moltmann, used to say that we need to remind ourselves that in Moscow people cook their soup with water, just as we do in Bonn or Washington. Soups are different: ideological differences are real, and they matter. But water is the same: commonalities are undeniable and important.

How would you grade the Christian response to Islam in the years since 9/11?

There are A+s, there are Cs, and there are Fs. Guided by the conviction that both truth and love matter and that violence is unworthy of Christians, some Christians have responded exceptionally well. Rowan Williams, Archbishop of Canterbury, is a good example. So is Rick Warren. So are many thoughtful, generous, and deeply committed Christians.

At the same time, many Christians have responded with aggression. At their extreme, their slogan is: “Everything I needed to know about Islam and Muslims I have learned on 9/11,” and they, sorry followers of Christ, carry guns to churches to protect themselves from Muslims. Such a view of Islam and Muslims is simply untrue, and every untruth is a form of injustice. All Muslims are not terrorists; and all terrorists are not Muslims.

Even worse, the description of Islam as “a terrorist religion” feeds hatred and inspires violence toward Muslims, the very opposite of what Christians are called to do not just in regard to neighbors, but also enemies. Now, there are Muslims whose method is violence, even violence against the innocent. But as we have witnessed recently in Norway, there are such Christians as well.

Christians who get Cs and Fs for responding to Islam consider a Muslim terrorist to be the embodiment of Islam, while they think a Christian terrorist is an aberration of Christianity. Lest I be misunderstood: I am not suggesting that Muslims’ response to Christians has been better than Christians’ response to Muslims. But Christians should not mirror Muslims’ worst response, but act out of the authentic character of their faith.

In earlier work, you’ve discussed the need for victims to repent, particularly in a context of social and cultural conflict. Think of the recent anti-mosque campaigns and concerns about “creeping sharia”—would you say that these “acts of exclusion,” to use your language, emanate from a failure to repent?

I am not sure whether or not these acts of exclusion emanate from our failure to repent. Maybe. Then we would reason something like this: Since we stand by our violence against Muslims in the past, we are justified to perpetrate violence against them today.

My sense, though, is that today’s exclusions stems from fear and from the need to generate enemies so that we can justify our own need for violence. Clearly, concern about “creeping sharia” in the United States is absurd; chances that sharia will be implemented in the United States are only slightly better than that Martians will invade. And yet people are really exercised by the perceived threat of Muslims “taking over America.” A few exceptions notwithstanding, there is no real enemy to speak of, but people create the enemy. Why? Because they harbor enmity and are plagued by fear and resentment. This is a deeply unchristian stance. We are supposed to love enemies and, if possible, make friends of them; we are not supposed to manufacture enemies so we can have targets for our fears and resentments.

As you indicate, some observers think the solution to Christian-Muslim conflicts is for both to secularize their faith and practice. You argue that the only road to peace is for both to recognize that they serve a common God. Which solution is more likely to occur?

On the global scene, we live in a time of vibrant and politically assertive religions. That holds true above all for Christianity and Islam. No serious commentator believes that this will change in the foreseeable future. The likelihood that Muslims and Christians will secularize their faith and politics is minimal.

As to the recognition that they have a common God, Muslims have always believed that Christians worship the same God as they do. The Quran says: “Our God and your God is one.” Christians as well have traditionally believed that Muslims worship the same God as they do. Nicholas of Cusa did. Martin Luther did. The Second Vatican Council did. The debate was about the proper understanding of that one God; in some circles today it has devolved to reciprocal accusations of idolatry. We need to remind ourselves today of the rich tradition on both sides which affirmed the common God, and draw on the political consequences.

How do you understand the relationship between Christianity’s triune God and Islam’s one God? Can the Christian God be God without the Trinity?

I think that Nicholas of Cusa got it right when he said: Everything that Jews and Muslims deny about the Holy Trinity ought to be denied by every orthodox Christian. For instance, Muslims, like Jews, deny that there are three independent agents in God; Christians who know what they are talking about deny the same thing as well. Those who don’t are heretics, to use the traditional language (without advocating traditional means of dealing with heresy!)

Can the Christian God be God without the Trinity? No, God cannot be God without being Triune, because there is and can be only one God, the Holy Trinity. But that is not the disputed issue. The issue, rather, is this: can you worship the true God, who is triune, without knowing that God is triune? The answer is very simple and irrefutable: The Jews have always done just that. Which God do Jews worship? They worship the God of Abraham and Sarah, Moses and David, Isaiah and Hosea. Which God do Christians worship? They worship that same God. And they believe that that God is the Holy Trinity. The Jews worship God without acknowledging God’s Trinitarian nature; Christians worship God while acknowledging God’s Trinitarian nature. Both cannot be right about God’s Trinitarian nature, but both can worship the same God. The same holds true of Muslims.

What advice would you give to a Christian who was reading the Quran for the first time?

If you can, read the Quran with a Muslim and invite that Muslim to read the Bible with you. And then talk about what you are reading—trying first to understand rather than being quick to condemn.