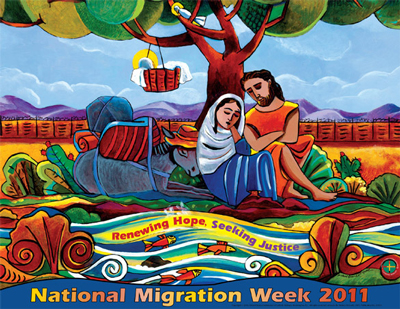 How is migration changing the world’s ecclesial landscapes? What are these changes, and how do they impact migrant communities? What can churches do to promote acceptance of diversity and devise new answers to the theological question, “Who is my neighbour?” in an increasingly globalized world.

The conference was organized by the WCC programme on Just and Inclusive Communities, and hosted by the  Middle East Council of Churches at the Near East School of Theology in Beirut from 5-7 December.

Participants from Africa reflected on how migration is not a new phenomenon, but has always been present, with people on the move for their livelihood. It was also noted that in Africa internal migration has outnumbered external migration.

Presenters pointed out poverty, unemployment and conflict as the major reasons behind mass migration, which is taking place in Africa and beyond. With these challenges, they said, the theology of welcoming and loving one’s neighbour becomes more crucial than ever before.

Contributing to the discussions, Sarah Silomba Kaulule, vice-moderator of the WCC Faith and Order Commission, focused on migrants’ situation in Zambia saying that changing ecclesial landscapes demand that we incorporate issues of interfaith relations, identity, justice, racism, advocacy and diakonia in dealing with migrants as our neighbours.

“The church’s mission is to receive migrants and refugees. For this we need a strong foundation that does not cause divisions and displacements in the churches, but helps us to understand and accept each other as we pursue the ecumenical goal of ‘called to be one’,” she said.

Kaulule encouraged the churches to overcome the challenges in providing a safe space for all, including migrants, who often are abused and fall prey to human trafficking, a common practice around borders.

Experiences shared by participants showed how migrants face social exclusion, and are treated as the “other”.

They also addressed the issues of gender relations and family dynamics. It was highlighted that due to changes in power relations when women take up the role of breadwinner, incidents of domestic violence have occurred.

In addition, women migrants face sexual abuse in some situations. To challenge this violence and support migrant women, churches reaffirmed their role in providing a faith-based and ethical viewpoint from which to address these issues.

While reviewing the outcomes from the discussions, participants quoted several biblical references calling the faithful to “liberate the most disadvantaged and the marginalized”, an approach which can be embodied by the churches through enhanced and engaging efforts towards supporting migrant communities.

The particular situation of migrants in Europe raised issues of identity, cultural diversity and dynamics between older churches and the new international churches that are sometimes called “migrant churches”.

Dr Gerrit Noort, director of the Netherlands Mission Council, spoke about the challenges posed by multiculturalism. He said, “Faith communities and churches have been the social sites and spaces for experiments in dealing with issues of cultural diversity in Europe.”

Giving an example from the Netherlands, Noort said, “the ‘old’ and ‘new’ churches in the Netherlands are increasingly aware of each other, and are more pro-active in ecumenical cooperation.”

These changes in the ecclesial landscape, according to Noort, are likely to influence and shape the relationship between the churches in the direction of a more collaborative ecumenical cooperation to support cultural diversity.

The dynamics of the “Arab Spring” and its impact on migration in the Middle East brought some significant revelations. Presenters from the region as well as the hosts shared their views about the complexity of political developments, due to which many people are choosing to migrate.

Amidst the current wave of migration, where people are fleeing political turmoil, conflict and persecution, promoting respect for religious minorities and initiating meaningful interreligious dialogue is especially pertinent, according to the participants.

Dr Audeh B. Quawas from Jordan, a member of the WCC Central Committee and member of the Greek Orthodox Patriarchate of Jerusalem commented, “To promote respect for religious minorities and to initiate a positive dialogue especially among Christians and Muslims, churches will have to do more.”

“Churches in the Middle East are called to defeat fear and the sense of insecurity among the communities who choose to migrate, as this causes a serious threat of ‘brain drain’ in our countries,” he said.

The issue of “forced migration” was discussed in detail. Many people flee their homes due to ecological disasters. It was noted that environmental disasters can results in migration.

Pointing to global warming and climate change as the major indicators for migration in his region, Rev. Asora Amosa from the Pacific Council of Churches described church initiatives helping environmentally displaced people.

Providing an ethical perspective in the churches’ support for migrants, he said, “The theological basis of the churches’ concern in regard to the environment is God’s relationship to his created world.”

He said, if “we are to be good stewards of God’s creation – fanua (land) and moana (sea), we have to reflect on the Creation story in the book of Genesis, which emphasizes that God is our creator and we are his creation.”

According to Amosa, this is the theological basis for supporting environmentally displaced people, which is part of the forces changing the world’s ecclesial landscape.

Following the concluding session of the conference, a working group began to prepare a theological statement on migration with the hope that this document will enrich discussions in the autumn of 2013 at the WCC’s upcoming 10th Assembly in Busan, Korea, addressing the theme, “God of life, lead us to justice and peace”.