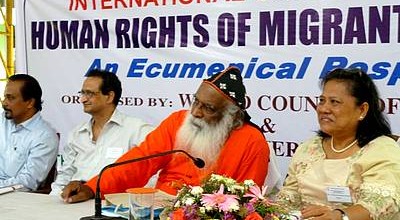 The human rights of migrant workers in the Arabian Gulf region was the subject of a consultation convened at Santhigiri Ashram in Alwaye, India by the World Council of Churches (WCC) and the Christian Conference of Asia.

Thirty representatives of churches, specialized ministries and civil society organizations gathered from 28 April to 3 May for the International Consultation on Ecumenical Advocacy for the Protection of the Human Rights of Migrant Workers in the Arabian Gulf Region.

In a communiqué issued at the meeting’s close, the participants called for implementation of international agreements aimed at protecting migrants from exploitation, and for final ratification of the International Convention on the Protection of the Rights of All Migrant Workers and Members of their Families (ICRMW).

Dr Mathews George Chunakara, director of the WCC-administered Commission of the Churches on International Affairs (CCIA), noted that “countries may be held liable under international law for failure to fulfil their obligations under the ICRMW.”

The communiqué also calls on churches and other religious bodies in labour-sending and labour-receiving nations to find practical and effective ways of supporting migrant workers and their families.

Communiqué: Human Rights of Migrant Workers in the Gulf

An international consultation on Ecumenical Advocacy for the Protection of the Human Rights of Migrant Workers in the Arabian Gulf Region was held at Santhigiri Ashram, Alwaye, India from 28 April to 3 May 2012. The event was organized jointly by the Commission of the Churches on International Affairs (CCIA) of the World Council of Churches (WCC) and the Christian Conference of Asia. The Consultation was an initiative of the CCIA as mandated through a working group’s study process to work towards an ecumenical response for the protection of the rights of Migrant Workers in the Arabian Gulf region. The Consultation was attended by thirty participants, representatives of Churches and migrant-serving institutions and organizations from sending and receiving countries in Africa, Asia, Europe, the Middle East and North America, including ecumenical organizations and specialized ministries together with representatives of migrant workers from the Arabian Gulf countries. It provided a platform to discuss the problems and concerns related to the rights of migrant workers in the Arabian Gulf countries. in its deliberations, participants in the consultation reflected on the role of churches in addressing concerns regarding the rights of migrant workers, how best to raise awareness about their working and living conditions and that of their families in the Arabian Gulf states, and how to find collaborative ecumenical approaches among churches in labour-sending and labour-receiving countries, so as to stand in solidarity with migrant workers facing exploitation and violations of their human dignity and rights.

Migration is a growing global phenomenon, and the International Organization for Migration estimates that there are some 80 million people around the globe who live and work as migrant workers. The International Labour Organization (ILO) has estimated that in 2010 there were about 105.4 million economically active migrants (including refugees) across the world, representing 44 per cent of the total migrant population.  The discovery of oil in the 1950s and the more recent colossal infrastructure development in the Arabian Gulf have been accompanied by a rapid influx of labourers to this region, mainly from South and South East Asia, Africa and neighbouring Arab countries. These migrant workers have brought necessary foreign technologies, knowledge and skills to the region and in effect have become the primary labour force together with unskilled, domestic and irregular workers.  However, while the sending and labour-receiving countries in the Arabian Gulf benefit from migrant labour, their exploitation and abuse remain a reality.

Migrant workers in the Arabian Gulf countries often face gross violations of their rights, exploitation and at times violence leading even to death. The most vulnerable are the female domestic workers and unskilled and irregular labourers, being subjected to long working hours without rest, deplorable and inhuman working and living conditions, irregular pay, confiscation of travel documents and victimization by unscrupulous agents and employers. Many of them also undergo physical and sexual abuse and even rape. This is compounded by their lack of knowledge of the local language and migration procedures as well as ignorance of their basic labour rights. At times, on their arrival at a worksite unskilled migrant workers are compelled to sign new contracts in a language alien to them with changes made to suit the employer; sometimes specific clauses are included under which the worker is denied basic human rights. They often face discrimination on the basis of their ethnicity. Hundreds of thousands of migrant workers are forced to live in labour camps in deplorable and inhuman conditions. The “kafaala” system, which ties a migrant worker to an individual employer who serves as his/her immigration sponsor, has been compared to modern-day slavery and perpetuates the exploitation of migrant workers, often treating them as commodities, and many become victims of human trafficking.  Migrant workers who leave their homes in the hope of improving their life situations often return disappointed and defeated and in some instances end their lives.

However, against the backdrop of these dismal and appalling circumstances, progressive action on the part of various human rights organizations, intervention by the UN and advocacy on the part of other nations has led to the promulgation of employee-friendly laws in several Gulf countries.  Though slow in implementation, these new laws are a ray of hope. The several safeguards brought about by these laws provide protection for temporary migrant workers against contract fraud, illegal recruitment fees, passport confiscation and restriction of movement. In addition, the new laws, if implemented and enforced, will ensure timely payment of monthly remuneration, work-hour limits, health care and safety regulations as well as new administrative procedures for the equitable treatment of contract workers.

Despite the fact that the international human rights instruments and mechanisms, especially the   International Convention on the Protection of the Rights of All Migrant Workers and Members of their Families (ICRMW), was adopted by the General Assembly of the United Nations in 1990 as a means of providing international protection for the rights of migrant workers and their families, most countries are yet to ratify this convention. This shows that most UN member states have yet to value the significance of the convention which sets out the basic rights and freedoms guaranteed to all migrant workers. The ILO C189 on Decent Work for Domestic Workers 2011 is considered a milestone in this area.

Our commitment to uphold the dignity of human life is based on our biblical and theological foundations and reiterated and called forth in Holy Scripture through the voices of the prophets, the ministry of Christ and in the letters of the apostles. In the Old Testament and New Testaments we are introduced to a central truth that human beings are created in the image and likeness of God – Imago Dei (Gen. 1:26–27; 5:1–3; 9:6; 1 Cor. 11:7; James 3:9). Imago Dei names the personal and relational nature of human existence, and God calls us to act justly towards and on behalf of those whose Imago Dei is being threatened: their human dignity and rights are violated through exploitation. God calls us to stand in solidarity with these afflicted migrant workers and to be engaged in a mission of prophetic witness to uphold the rights and dignity of migrant workers.  The prophetic call reminds us, “I am the Lord, and I have called you to be just and good. I will hold you by the hand and watch over you. And I will give you as a covenant to the people, as a light to all nations. You will open blind eyes. You will bring people out of prison, out of the prison where they live in darkness.” (Isaiah 42:6-7).

The consultation, whilst acknowledging and deeply appreciating the support and pastoral care afforded by the churches both in the sending and receiving countries, makes further recommendations for ecumenical joint actions for strengthening global advocacy for the Protection of the Human Rights of Migrant Workers in the Arabian Gulf Region:

We invite the support of all churches and the ecumenical movement to advocate for the ratification of the 1990 International Convention on the Protection of the Rights of All Migrant Workers and Members of their Families (ICRMW), and ILO C189 on Decent Work for Domestic Workers; to lobby through contacts with National Human Rights Commissions; to form advocacy partnerships with international human rights organizations, legal support mechanisms, NGOs, faith-based communities, trade unions and local civil society organizations; to lobby and advocate for the cancelation of the Kafeel system in Arabian Gulf countries;  to form partnerships with the wider ecumenical community in their respective countries to work with local civil society and faith-based organizations; to provide pre-departure training, including vocational, language and legal rights awareness, for migrant workers, to provide legal counsel and educate  workers about their rights before they depart for the destination country. We also invite all member churches to raise awareness among the expatriate congregations in the Gulf countries about the needs of migrant workers; and to provide training for church leaders in sending and receiving countries.