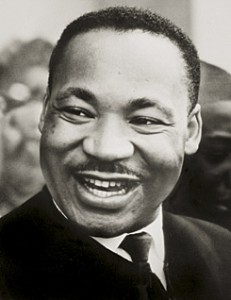 “The gospel at its best deals with the whole man, not only his soul but his body, not only his spiritual well-being, but his material well being. Any religion that professes to be concerned about the souls of men and is not concerned about the slums that damn them, the economic conditions that strangle them and the social conditions that cripple them is a spiritually moribund religion awaiting burial.” – MLK

“Increasingly, …this is the role our nation has taken – the role of those who make peaceful revolution impossible by refusing to give up the privileges and the pleasures that come from the immense profits of overseas investments.” Martin Luther King, Jr. (April 1967)

In 1967, Dr. King put forth two options for America’s future– Chaos or Community. Humanity will either develop the skills to live together as sisters and brothers or perish as fools.

‎“Let us develop a kind of dangerous unselfishness.”

MLK in “I’ve Been to the Mountaintop” http://dsr.gd/eSdyq6

To me the relationship of the ministry of Jesus Christ to the making of peace is so obvious that I sometimes marvel at those who ask me why I’m speaking against the war…It is no longer a choice, my friends, between violence and nonviolence. It is either nonviolence or nonexistence.” – Martin Luther King, Jr.

Unarmed truth and unconditional love will have the final word.

‎”The tough mind is sharp and penetrating. It breaks through the crust of legends and myths, and sifts the true from the false. …but …the gospel also demands a tender heart. …There is nothing more tragic than to see a person who has risen to the disciplined heights of tough mindedness and has at the same time sunk to the passionless depths of hard heartedness.”Martin Luther King, Jr. (“A Tough Mind and a Tender Heart.”)