New Liturgy Professor Cláudio Carvalhaes: “Worship is the way we honor God with all our hearts, minds and bodies”

São Paulo, Brazil native says we know our own tradition better by knowing the faith traditions of others 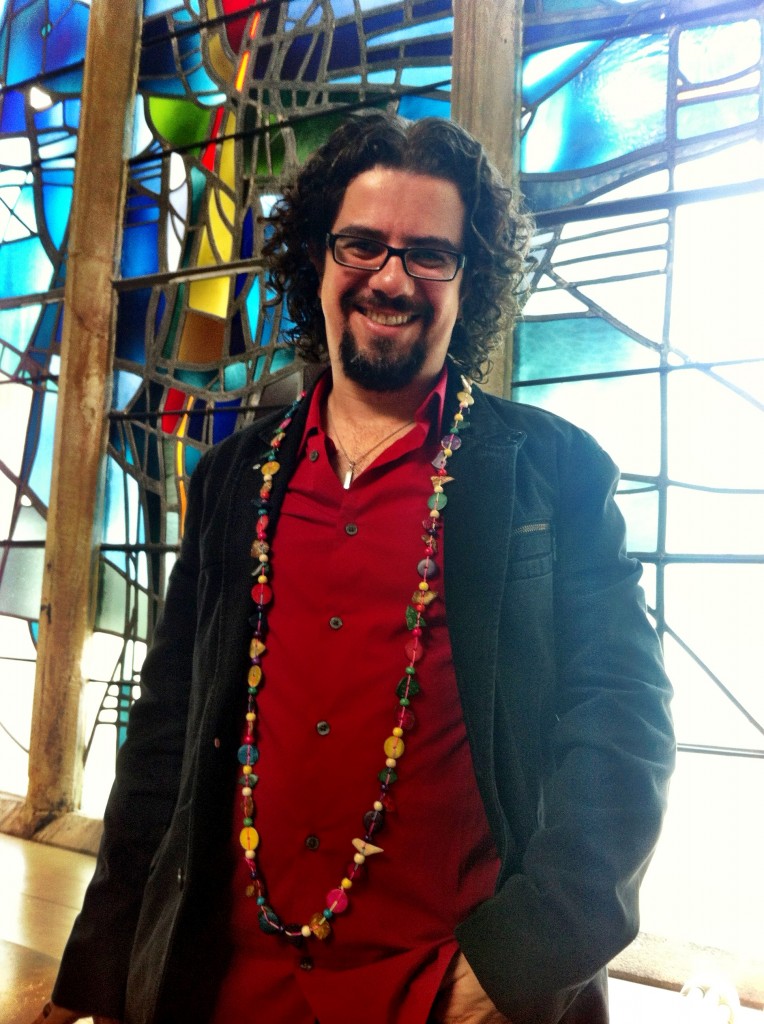 Hooked on energy drinks to get through the day? Instead, try spending a couple of hours with LTSP’s newest faculty member, Cláudio Carvalhaes, who this fall began his duties as associate professor of Liturgy and Worship at LTSP.

It doesn’t matter what the subject matter is — growing up in poverty in Sao Paulo, Brazil; once serving as pastor of a congregation of mostly undocumented immigrants in Fall River, Mass; looking forward to classroom exchanges with seminary students in Philadelphia; even describing what it was like working as a shoe shine boy when he was 8-years old and being proud of his shoebox while “taking a shine” to customers on Sao Paulo’s streets. Carvalhaes exudes unrivaled enthusiasm, passion and gratitude for the blessings that have brought him this far by faith. A conversation with Carvalhaes beats an energy drink highball hands down.

For Carvalhaes, worship is the central discipline for connecting people not only within congregational life but also to humanity well beyond the walls of the church.

“Worship is the way we honor God with all our hearts, minds and bodies,” he said. “It is the way we respond to the greatest love by saying thanks to God. It makes no sense to say we love God if we do not love our neighbor — if we do not love each other fully. Worship is that powerful place where we eat together through Holy Communion and we rehearse a new life, how life should be as we move forward. We are strengthened and empowered by a God who welcomes us.” He cites those he has known from African Christian traditions who say they cannot make it through the week without worship. “It makes us somebody. It empowers and connects us. It transforms our lives.”

Carvalhaes is deeply honored to have been so thoroughly endorsed by faculty colleagues to teach worship as a Presbyterian at a traditionally Lutheran school. He is keenly aware he is succeeding “masters” in the field including the likes of Gordon Lathrop, Melinda Quivik, and Dirk Lange. “The position I hold has had an enormous reputation. LTSP is just a great place for me to be,” he said. And he values that the school offers a PhD degree. In this coming year, he will teach at the seminary Early Christian Liturgical Practices, Introduction to Liturgy, Preaching and Worship and Rite of Passages and Worship and the Arts, besides leading a Travel Seminar to Brazil during the Summer of 2013. He will also advise international students.

The new professor, who comes to LTSP following five years of teaching worship and preaching at Louisville Presbyterian Seminary, is never far from thoughts of his Brazilian roots. Yet he has cultivated a broadly global and multicultural perspective. For this interview he wore a colorful necklace that he bought from a street vendor someplace in Latin America.

Carvalhaes grew up poor. His first shoe shine work began at age 8. When he was 13, he managed to find work as an “office boy,” working 8:00 am to 6:00 pm each day and studying in the evening. His parents had grade school educations. His late father, Waldemar, was an artist and came from a Roman Catholic family. His mother did house-cleaning and laundry for a living, and she also sold perfume. Sometimes Cláudio helped her out. His mother also taught him about singing and praying in their Presbyterian congregation and about the centrality of the church. She led a circle of prayer in the congregation and taught her son “not to take anything for granted.” He recently learned his late great-grandmother was a Lutheran, and so his personal history strongly reflects his deep interests in ecumenism.

“My mother, now 81, is a strong woman,” Carvalhaes said. (His mother has already visited LTSP.) “She taught me that the church is a way of life for our family. I really could not do anything else but follow the path I am on. I wanted to be a pastor, and for a long time I knew I wanted to do research, write, and teach.” (He is the author of several books, many articles and chapters.) A forthcoming book, Eucharist and Globalization: Redrawing the Borders of Eucharistic Hospitality (Wipf and Stock, Pickwick Publications) is due next year. There was a crisis along the way, a time when he wondered if his chosen church leadership path was “someone else’s idea.” But that passed.

“I stand on the shoulders of so many others in getting to this place,” Carvalhaes said. He is the first person in his Brazilian ancestry to have received an education and a PhD. He is profuse in gratitude to his parents, as well as an Anglican Priest in Sao Paulo, Jaci Maraschin, who led him to many places of worship as he began to mature. Maraschin, he said, taught him to have a love of worship and liturgy. He is deeply grateful to his advisors at Union Theological Seminary, Janet R. Walton and Delores Williams, and to Louisville Seminary’s now retired President, Dean Thompson, who provided a stipend so that Carvalhaes could complete the final stage of his PhD work in New York City before coming to Louisville to teach five years ago. He earned an MPhil from Union (2006) and his PhD there as well (2007), focusing his PhD studies on the interdisciplinary fields of Liturgy and Systematic Theology. During Union Seminary ceremonies according him his PhD, he begged for a special moment, removed his hood and went into the audience to place it over his mother’s shoulders. The memory  of that moment moves him to tears.

His early studies were in Sao Paulo, at the Ecumenical Institute of the Graduate School of Theology, Methodist University of Sao Paulo, where he earned an MPhil (1997), and Independent Presbyterian Theological Seminary, where he earned his MDiv (1992). He also completed specialization studies in ecumenism at the Ecumenical Institute of Bossey — World Council of Churches in Geneva (1995).

During his study years in Brazil he began visiting a small rural church outside Sao Paulo where he taught Bible studies to adults and children. “They taught me all about what it means to be a pastor serving in a community,” he recalled. They did not want to call him to paid service, he remembers with a smile. “They kept telling me I would be able to earn more money elsewhere.” But he persisted with his teaching and pastoring. “It took me two bus rides and a subway ride to get there, and 20 or 30 children would always be by the transit stop to greet me,” he remembered.

Carvalhaes said he is well aware of the costly expenditures to maintain buildings of struggling churches in North America. By comparison, the first church he served had no building. “We all agreed that having four walls would make a difference in how much we could accomplish in our ministry,” Carvalhaes remembered. “We figured out it would cost about $8,000 (for a piece of land and building), and so we began raising some money even though many folks could not afford to give anything because they had no work.” Contributions for the building would get diverted to emergency community needs such as food and medicines. “After two years of campaign, we had $400. Many times the needs of people would come ahead of the concern to have a building. That taught me a lot.”

Carvalhaes came to the U.S. by invitation of the Presbyterian Church USA. The Presbyterian Church in the New England area wanted to reach out the Portuguese speaking community around Fall River, Mass., and they needed a pastor who could speak Portuguese. He created a congregation from scratch. The church was comprised largely of undocumented immigrants who worked in fish processing plants, as day laborers or factory workers. Many women worked in shirt factories, cleaned houses, theaters or supermarkets, served as babysitters, or worked in Laundromats.

“It was a difficult time,” he recalled. “Ninety-five percent of the immigrants never wanted to come to the U.S. But they decided they had to come where the money is in order to support their families. It was a sign to me that wealth is just not very evenly distributed around the world. The immigrants always lived in fear of being caught. They worked hard and they paid taxes they never had a chance to benefit from. It was a mixture of good and bad experiences. The church was always there to welcome them and to help. But it was a broken community.”

Carvalhaes eventually decided to pursue his dream to research, write and teach by accepting a scholarship opportunity at Union. While there he recalled vividly a powerful Holy Communion experience involving another (future) LTSP faculty member, Storm Swain, who was serving as a rector at the Episcopal Cathedral of St. John the Divine. Swain teaches pastoral theology at LTSP. “I remember the powerful sense of welcome and healing I felt with her at that communion table,” he said. He had been visiting many congregations from a variety of traditions in New York City to further explore his love of ecumenism.

Now in Philadelphia, Carvalhaes is keenly aware that some may fear or be uneasy about a Presbyterian teaching Liturgy and Worship at a traditionally Lutheran seminary. “I say to them what I tell my students,” he said. “You have to love someone else’s tradition. You learn to love someone else’s tradition so you can be free to love your own tradition better. In my new teaching role I feel honored and challenged to love deeply the Lutheran tradition and Church as I have tried to learn to love many church traditions.”

Carvalhaes says LTSP seems ready to try something new in a way that many other institutions may not yet be ready for. “Lutherans have a considerable history of embracing ecumenism,” he said. “I believe in deciding to offer me this opportunity the faculty and others had to study the direction for the present and coming church and discuss where they wanted LTSP to go, and they ended up endorsing me unanimously. That is an enormous response and level of trust to do the work before me. And I believe that as a result, because of the diversity of the faculty, we will be better prepared to train the pastors of the future.” Carvalhaes adds he believes the Lutheran Church recognizes the need to continue to work at expanding itself to be more culturally diverse, and the seminary is showing institutional leadership toward that end. Likewise, he thinks the seminary is becoming even more true to its identity “by opening space for others to live fully the church’s call to live ecumenically.”

“Something special is happening here,” he said, taking note that students from some 30 backgrounds have studied at LTSP over the years. “We know ourselves better by knowing others. Being in relationship with others IS the definition of the church. It is an opportunity for us to listen to each other, to offer each other healing, share life and differences and not be afraid, and I am so excited to be a part of this community.”