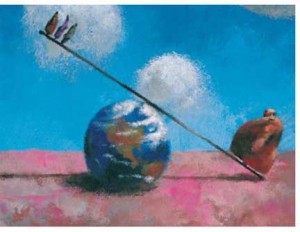 More than 100 Protestant leaders from 12 countries in Latin America, representing diverse denominations and ministries, have written an open letter expressing their concern over the economic crisis in the United States and the decisions being made by the U.S. Congress to address it.

In their letter addressed to Christians in the United States, the Latin American leaders urge them to “lift up the voice of the millions of people who do not have a part in the major economic decisions being made in Washington, D.C.”

They call upon U.S. government officials to recognize that the actions they take have consequences not only in the U.S. but also on the economies of other nations, and therefore in both the short and long terms, they will be affect millions of people in the countries of the global south.

Congress recently raised the debt limit of the U.S. by $2 billion in exchange for budget cuts that will affect social programs that benefit the poor, not only in the U.S., but also in other countries, the letter states.

Expressing solidarity with the poor in the U.S., the Latin American leaders express their surprise and indignation at how the economic crisis has been addressed, and criticize politicians who “only embrace the interests of the rich, while preferring cuts to social programs that serve those in greatest need.”

“Paying more taxes will not bankrupt the rich. Cutting social benefits for retired people, the sick, and others puts the lives of such persons at risk. Is this not brutally unjust?,” they exclaim.

The Latin American evangelical leaders encourage U.S. Christians to join the efforts already undertaken by various churches and Christian organizations, such as those leading the “Circle of Protection” movement, among others.

“Do not falter in your efforts, even though these may be lonely times for those whose prophetic voice does not appear to be heard by the politicians,” the letter concludes.

The letter is signed by a broad array of Latin American Protestant leaders: the presidents of the Protestant Councils and Alliances in countries such as Peru, Ecuador, Honduras, Argentina, Brasil and Uruguay, as well as directors of humanitarian aid and social action organizations.

It is also signed by such international bodies as the Latin American Council of Churches (CLAI), Fellowship of Evangelical Churches (CONELA), the Association of Reformed and Presbyterian Churches of Latin America (AIPRAL), the Micah Network, Red del Camino (the Network of the Way) , the Movement Together for Children and others

Denominational leaders who are signers include the Assembly of God, Baptists, Church of God, Free Brothers, Pentecostals, Presbyterians, Methodists, Lutherans, Reformed, Episcopalians. Other signers include seminary rectors and presidents, directors of national Bible societies, professors of theology, and leaders of other professional Christian networks.

Dear brothers and sisters in Christ,

We are fellow believers with you in the God who has never ceased reaching out to defend the poor and the excluded. We view with deep concern recent decisions in the United States that will add to the suffering of the most vulnerable members of U.S. society.

As people of faith who have ourselves lived through economic and political turbulence in recent decades, we join with U.S. religious leaders from all Christian faith traditions who are fulfilling their prophetic role by standing in solidarity with the poor. In such times, faith leaders must be true to their vocation and amplify the voices of the vulnerable millions that have been excluded from the heated political debates that have raged in Washington.

Those who govern should know that the decisions made in your country have consequences for the economies of other nations around the world. In the medium and long term, they will affect the lives of millions of people in the countries of the Global South. It seems to us immoral that politicians, with some exceptions, embrace only the interests of the wealthy, preferring to cut social assistance to those in greatest need.

We know the generosity and solidarity of the American people and the assistance programs to the poor that operate through churches and civil society organizations in Latin America.

It is therefore inconceivable to us that the wealthy make no effort to take responsibility for the debt generated by the country as a whole. Paying more taxes will not bankrupt them. Cutting social benefits jeopardizes the lives of the retired, the sick and others who are in need. Is this not brutally unjust?

Therefore we, the undersigned Christian leaders of Latin America, write to express our solidarity with the people of the United States, especially those who embrace Christianity, who call for a true and just resolution to this crisis — a crisis that is not only economic, but also, and above all, moral.

We encourage you to join the efforts of various churches, including those called “Circle of Protection.” Our prayers are with you, dear brothers and sisters in the faith. Do not falter in your efforts, although these may be lonely times for people whose prophetic voice the politicians seem not to want to hear.

God is watching the politicians and will not stop telling them: “Give justice to the poor!”(Psalm 82:3)