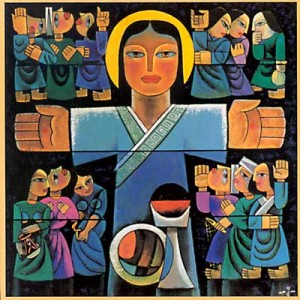 After ten years of ministry as Secretary for Women in Church and Society in the Lutheran World Fed- eration Department for Mission and Development, and a life-long journey of working with women and men in interfaith living, it has been a privilege to contribute in the production of this document. Such an experience was nurtured by the remarkable wisdom of men and women of faith across the con- tinents, the challenges raised by young visionaries, and the moving trust and innocence of children, all of whom hope for a better world.

Even with these blessings, it has not been easy to lift up or mainstream gender either in the LWF Geneva Secretariat or among the churches. The ministry called for enduring diplomacy and art of negotiation in mutual respect. The “glass ceiling” that faces women is as prevalent as the resistance to change harbored by others. But even though violence against women and gender bias are evident in member churches, recognition of the gifts brought by women is also forthcoming. Openness among men and women’s persistence provide positive impulses in the strengthening of work on gender. Men have often taken the lead in introducing agenda on gender, and in reduc- ing violence. Such transforming behavior brings hope, pointing to the need to press on before complacency sets in.

This document is intended not to explain how integral gender is to all human development initia- tives, be they social, economic, or political, either in church or society, but how faith could enhance and complement our understanding of gender and power. There is reflection on past commitments of the Lutheran communion in relation to gender, as well as analysis of the relevance and importance of gender issues as perceived and envisioned by church leaders and representatives over more than sixty years of LWF history. There is also explora- tion of how to further guide the communion as a sign and expression of inclusiveness.

Grounded in the basic biblical understand- ing of gender and power, the document includes experiential input from the work of the LWF. It is intended for church leaders, both lay and clergy, men and women, to help readers determine whether the churches have been able to “walk the talk.” Reflecting on gender and power with Jesus as touchstone, it furthers understanding of a few core principles and the ethos of being a faith- based communion.

Biblical quotations are from the New Revised Standard Version (NRSV), according to LWF practice. Readers are, however, invited to use other versions in discussion of how biblical lan- guage shapes our way of thinking about gender. In addition, feminist perspectives in theology are used to recognize and affirm not only women writers but also men, who reject patriarchy and reread through feminist eyes to maintain a life of complementarity and mutuality. To lend a global and communion perspective, the included texts have been revised based on comments and valu- able input from readers including theologians, pastors, laypeople, students, women’s networks, and gender promoters among men and youth.

The aim is not to provide a finalized publi- cation but rather a discussion starter and work in progress, to be appropriated and adapted to national and regional church contexts, and to its own local specificity. The aim is also invitational because compliance and transformation must come from within.

Gender perspective is a learned discipline, a call to and reaffirmation of a discipleship of equals that could be transformative. Leaders are invited, therefore, to reflect on gender and power for the purpose of greater effectiveness throughout their diverse responsibilities. As they clarify and define where the LWF stands in terms of gender as well as its profile as an inclusive communion, it is hoped that the included texts will also be of use

Department for Mission and Development – Women in Church and Society to those in leadership in faith-based development networks, mission agencies, and other partners; and that, in turn, they will have some bearing on the LWF’s ecumenical and working relations. They also are presented as a reminder of, and to retain, gender as an analytical tool for mainstream use throughout the issues and themes in which the LWF engages.

The Word of God, the Lutheran affirmation of faith, and God’s gracious and loving accompani- ment both formed, and informed, the drafting of this document. It was sponsored by the Church of Sweden and Norwegian Church Aid.

It is my hope and prayer that this publication will further the concept of discipleship of equals, a priesthood of all believers whereby women and men, young and old, feel called to sit at a roundtable bringing their gifts, uniqueness, and complementarity to: “…‘event’ the good news of

Jesus Christ in all situations. It is important to keep in mind that we are witnesses in word and deed.”1 It is not only words of solidarity that the world is seeking, but also deeds of reconciliation, with our own selves, with God, with others, and with nature, so that the in-breaking reign of God becomes more tangible.

May God bless, and use, the gifts each one of us has to offer in promoting a caring and inclusive communion that embodies Christ, and reflects God’s love, peace and joy for God’s glory!