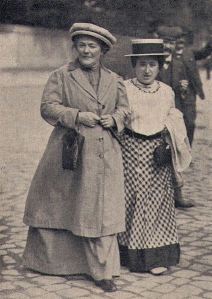 March 8 marks International Women’s Day; in 2011 it is also the Centenary of this day, which is celebrated all over the world. The history of International Women’s Day has its roots in the American National Women’s Day, a commemoration of the 1908 garment workers’ strike in New York that was organized by the Socialist Party of America. Inspired by this event, Clara Zetkin, a German feminist Marxist, helped organize the first international women’s conference in 1907 and at a subsequent meeting in Copenhagen in 1910 proposed the establishment of an official annual international women’s day to be held on March 8. During the decades of its inception the day has been celebrated in many different ways in different places and is still today a symbol of peace and solidarity among women of every class, race, belief and ethnic origin.

The purpose of celebrating International Women’s Day is multiple: First, we remember the struggles of working women historically in this country and globally and we make our claim today to stand in a line of foremothers who fought for women’s rights. We remember the roots of IWD in socialism and women’s involvement in political as well as economic movements across the world. We celebrate the achievements of women everywhere by lifting our voices in song and marching together in our different locations. We lift up the needs of reform for women everywhere, for fair working conditions and wages, for safety in working environments and in the family circle, for voices of women to be heard on their own behalf because in spite of much progress of the past century we still have a long way to go.

Speaking from a personal perspective, International Women’s Day became a reality for me when my husband and I were invited to join the march of Black Women in Salvador, Brazil, on March 8, 1998. I had not heard of IWD before that time but the march with its hundreds of women striding through the streets of Salvador, singing, chanting, calling out slogans, made a deep impression on me. I had been living with some of these women for a few months and I knew the desperation of women’s reality in many cases, which lent the event such power and eloquence. Together with the women of the world we look forward with hope to a better day when true equality between women and men will be an unquestioned reality everywhere.