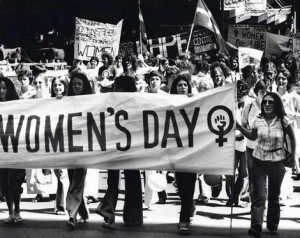 First declared in 1910, first event held in 1911.  The International Women’s Day Centenary should make the women of the past proud, the women of the present inspired, and the women of the future filled with vision.  Women have made great strides in equality, yet there is still a great deal to be done on many fronts.

This year marks the 100th anniversary of International Women’s Day. The day was commemorated for the first time on 19 March 1911 in Austria, Denmark, Germany and Switzerland, following its establishment during the Socialist International meeting the prior year. More than one million women and men attended rallies on that first commemoration.

Since then, International Women’s Day has been celebrated in many countries around the world. It is a day when women are recognized for their achievements without regard to divisions, whether national, ethnic, linguistic, cultural, economic or political. It is an occasion for looking back on past struggles and accomplishments, and more importantly, for looking ahead to the untapped potential and opportunities that await future generations of women.

In 1975, during International Women’s Year, the United Nations began celebrating International Women’s Day on 8 March. Two years later, in December 1977, the UN General Assembly adopted a resolution proclaiming a United Nations Day for Women’s Rights and International Peace to be observed on any day of the year by Member States, in accordance with their historical and national traditions. In adopting its resolution, the General Assembly recognized the role of women in peace efforts and development and urged an end to discrimination and an increase of support for women’s full and equal participation.

International Women’s Day has assumed a new global dimension for women in developed and developing countries alike. The growing international women’s movement, which has been strengthened by four global United Nations women’s conferences, has helped make the commemoration a rallying point to build support for women’s rights and participation in the political and economic arenas. It is a time to reflect on progress made, to call for change and to celebrate acts of courage and determination by ordinary women who have played an extraordinary role in the history of their countries and communities.

The United Nations observes International Women’s Day this year on 8 March 2011. The theme is “Equal Access to Education, Training and Science and Technology: Pathway to Decent Work for Women.”