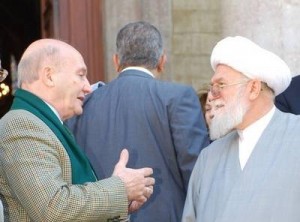 The annual observation of a world-wide Interfaith Harmony Week has been scheduled for the first seven days of February beginning in 2011. One of the groups that has endorsed the initiative was a global consultation of Muslim and Christian organizations addressing the topic “Transforming Communities” in November 2010. The consultation was convened at the Ecumenical Centre in Geneva and was jointly sponsored by the World Council of Churches (WCC), the World Islamic Call Society and A Common Word.

In his opening speech of the meeting in Geneva on 4 November, Jordanian Prince Ghazi Bin Muhammad bin Talal invited participating organizations to become involved in the UN-supported Interfaith Harmony Week.

The prince observed that “His Majesty King Abdullah II bin Al-Hussein proposed before the United Nations General Assembly the establishment of a World Interfaith Harmony Week.” On 20 October, the UN General Assembly unanimously approved the resolution and adopted the first week of February as Interfaith Harmony Week. Prince Ghazi described the concept as “an idea which epitomizes the best of what this conference is striving to do.”

The Transforming Communities conference members agreed to support and commit themselves to promote the initiative.

The goal of the interfaith week, which is to be celebrated each year in February, is to recognize “the imperative need for dialogue among different faiths and religions in enhancing mutual understanding, harmony and cooperation among people,” according to the UN resolution, which is posted on the World Interfaith Harmony Week website.

“This is an important time for all of us involved in interfaith dialogue,” said the Rev. Dr Olav Fykse Tveit, general secretary of the World Council of Churches. “By recognizing this week in our faith communities through prayer, public statements and other expressions we will move toward promoting inter-religious and intercultural dialogue.”

“This is vital in times when there are many who seek to divide people of faith instead of finding ways to enhance our lives together through the elimination of all forms of intolerance and discrimination,” he said in comments on Monday.

The effort has received wide-spread support including endorsements from religious and political leaders around the world.

Events being held around the world include interfaith luncheons in Australia, prayers for peace and bell ringing in Austria, inter-religious seminars in Pakistan, and an interfaith breakfast in Canada with Catholic, Jewish, Muslim, Lutheran and Hindu leaders.

“We invite the member churches of the WCC to celebrate this week of interfaith harmony by reaching out to people of other faiths in their communities and thus showing the love of God and love of neighbour, the primary themes of the week,” Tveit said.

Recognizing the imperative need for dialogue among different faiths and religions to enhance mutual understanding, harmony and cooperation among people,

Recalling with appreciation various global, regional and subregional initiatives on mutual understanding and interfaith harmony, including the Tripartite Forum on Interfaith Cooperation for Peace, and the initiative “A Common Word”,

Recognizing that the moral imperatives of all religions, convictions and beliefs call for peace, tolerance and mutual understanding,

1. Reaffirms that mutual understanding and interreligious dialogue constitute important dimensions of a culture of peace;

2. Proclaims the first week of February every year the World Interfaith Harmony Week between all religions, faiths and beliefs;

3. Encourages all States to support, on a voluntary basis, the spread of the message of interfaith harmony and goodwill in the world’s churches, mosques, synagogues, temples and other places of worship during that week, based on love of God and love of one’s neighbour or on love of the good and love of one’s neighbour, each according to their own religious traditions or convictions;

4. Requests the Secretary-General to keep the General Assembly informed of the implementation of the present resolution.