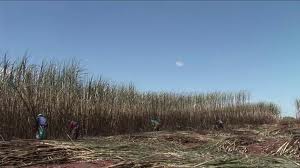 In southern Mato Grosso do Sul, bordering Paraguay, indigenous ethnic group with the largest population in Brazil struggle silently through its territory to try to halt the advance of powerful enemies. Continuousy expelled by the  process of colonization, more than 40 thousand Guarani Kaiowá live today in less than 1% of its original territory. On their land are thousands of acres of sugar cane planted by multinationals, in agreement with rulers, ethanol present to the world as the “clean” and environmentally correct. Without land forests , the Guarani Kaiowá live for years now with an epidemic of malnutrition that affects their children. Without alternative livelihoods, adults and adolescents are explored in the cane fields on extensive working hours. At the production of clean fuel, constant assessments made ​​by the Ministry of Labor in BRazil finds child labor as slaves in factories. Amid the frenzy of rush for gold green (as it is called the cane sugar), indigenous leaders are facing the power that imposes itself as a destination and are often commissioned by farmers to be killed.