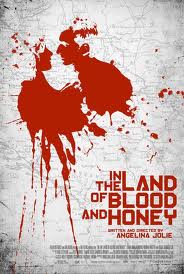 It is past midnight and I just arrived from the movies. I saw In the Land of Blood and Honey. The description of the movie goes like this: Set against the backdrop of the Bosnian War that tore the Balkan region apart in the 1990s, In the Land of Blood and Honey tells the story of Danijel (Goran Kostic) and Ajla (Zana Marjanovic), two Bosnians from different sides of a brutal ethnic conflict. Danijel, a Bosnian Serb police officer, and Ajla, a Bosnian Muslim artist, are together before the war, but their relationship is changed as violence engulfs the country. Months later, Danijel is serving under his father, General Nebojsa Vukojevich (Rade Serbedzija), as an officer in the Bosnian Serb Army. He and Ajla come face to face again when she is taken from the apartment she shares with her sister, Lejla (Vanessa Glodjo), and Lejla’s infant child by troops under Danijel’s command. As the conflict takes hold of their lives, their relationship changes, their motives and connections to one another become ambiguous and their allegiances grow uncertain. Angelina Jolie’s writing and directorial debut In the Land of Blood and Honey portrays the incredible emotional, moral and physical toll that the war takes on individuals as well as the consequences that stem from the lack of political will to intervene in a society stricken with conflict.

The movie portrays a small but brutal portion of what has become the most devastating conflict in Europe after the Second World War. Before the war, Bosnia was a place of ethnic and religious diversity where everybody lived together well and intermarried. But then, the war came and 2 million people had to live their houses, 100.000 people were killed while some many others displaced. Ethnic cleansing and 50 thousand women were raped. The International Criminal Tribunal for the Former Yugoslavia prosecuted rape as individual case against humanity. International forces such as NATO helped in the ceasefire.

This war happened also because of the DELAY of the international community in acting forcefully to prevent it from happening.  Now healing and reconciliation must continue to be done.

We are each other’s keepers!