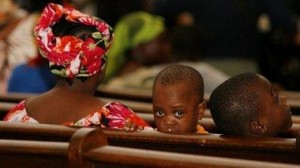 NDIANAPOLIS – Near the end of the Racial Ethnic and Immigrants Convocation plenary here tonight (July 1), after much singing and worship of God, Linda Valentine, executive director of the General Assembly Mission Council looked out at a packed ballroom. Quoting from Revelations she exclaimed, “You are part of God’s glorious vision of ‘every nation, tribe and people standing before the throne and bowing before the Lamb.’” (Rev. 7:9).

Valentine introduced a new video ― “Neema Means Grace,” which tells the story of how a Bible Study that began in the home of the Rev. David Nzioka in 2003, became the newest chartered church in the PC(USA), and first Swahili-English speaking congregation last month.

“This is what God intends for our church,” Valentine said. “I know that.”

By 2006, seeing all of the Swahili speaking people “who wanted to be faithful to Jesus Christ and Presbyterian,” Heartland Presbytery recognized them as an immigrant fellowship. The General Assembly Mission Council also got involved, providing funding, coaching and support to Neema who became a New Church Development in 2008.

The same year David returned to Thwake Village where he grew up. He returned to Kansas City telling stories of villagers walking a mile and half in search of water to a river that was drying up. Heartland Presbytery responded, helping build a health clinic and a well powered by a solar generator, which they hope will provide water sometime in July.

Roger Dermody, deputy executive director for mission, also spoke to those gathered about a vision for the PC(USA) to birth1001 new communities of faith in the next ten years.

“The church can learn much from you in the racial ethnic immigrant communities, he said. “We are thrilled for all of you are doing. Let’s get to know one another better, so that we can partner with you in helping our church be more effective.”