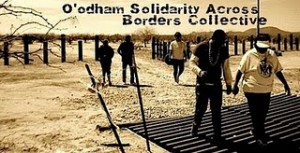 I did not go to jail expecting to meet a theologian. But jail was where I met Tupac Enrique Acosta. Tupac, like me, was arrested in front of one of the Maricopa County Sheriff’s offices for protesting against Arizona’s anti-immigrant law SB1070 on July 29, 2010. Unlike me, Tupac had an analysis of the bill’s place in history that put it firmly within the context of the ongoing repression of the indigenous peoples of North America.

Tupac, who would probably reject the label theologian, is the leading figure behind the Phoenix-based Nahuacalli, an organization that describes itself as “A Cultural Embassy of the Indigenous Peoples.” He is also closely linked with Puente, the grassroots organization behind many protests against SB1070 in Phoenix, and Puente’s leader Salvador Reza. Understanding his views on SB1070 illuminates that, for some, the struggle over immigration is about something larger.

In Tupac’s view the history of SB1070 does not begin in 2010. It begins in 1492 with Christopher Columbus’s arrival in the Western Hemisphere. Columbus’s “discovery” of the Americas prompted European political and religious leaders to develop what indigenous activists refer to as the “Christian Doctrine of Discovery.” This is the belief that because the lands of the Western Hemisphere were without Christians prior to 1492 they were free for the taking upon “discovery.” For activists like Tupac, the issues as stake in SB1070 are not so much political as theological.

Tupac shared his analysis with me as we waited to be processed through the legal system in holding cells and, later, when we were bunkmates in the cell block. More than once our conversations were interrupted when we were moved, it appeared arbitrarily, between cells. They were also interrupted when the Maricopa County Sheriff Joseph Arpaio came into our cell to “talk” with us. Sheriff Arpaio, who is currently under investigation by the United States Department of Justice Civil Rights Division, runs what he likes to call “America’s toughest jail.” He is known for his tactics of intimidating and dehumanizing prisoners, including trying to humiliate male prisoners by placing them in pink underwear and pink handcuffs.

Rather than intimidate us, Arpaio served as an unwitting example for our impromptu seminar on the Christian Doctrine of Discovery. Tupac suggested to me that the logical outcome of a legal system grounded in such a doctrine is laws like SB1070 and men like Sheriff Arpaio. SB1070 would not exist without the doctrine. Arpaio exists to enforce it.

As we sat together in jail Tupac traced the history of the Christian Doctrine of Discovery from its origin to its often unacknowledged presence in contemporary debates about immigration. He suggested that the doctrine was first articulated in Pope Alexander VI’s 1493 Papal Bull “Inter Caetera” and the 1494 Treaty of Tordesillas between Spain and Portugal. Together these documents created a theological and legal framework that justified the expropriation and division of indigenous lands by Spain and Portugal.

In the view of Tupac and many indigenous legal scholars the framework created to facilitate the seizure of indigenous lands continues to form the core of much of federal property law today. This is particularly true as it relates to indigenous property claims. The indigenous legal scholar Steven Newcomb, for example, has found traces of the Christian Doctrine of Discovery within U.S. Supreme Court cases as recently as 2001.

Tupac believes that the principles of the Christian Doctrine of Discovery are operative in SB1070 as well. As he told me, “the purpose of SB1070 was to consolidate the perceptions of some white Americans around the idea of an America that is white in a continent that belongs to them.” In his view, SB1070 is just another attempt to assert non-indigenous dominance over the continent. After all, SB1070 is designed to enforce a border that divides not only the United States and Mexico but the indigenous peoples who belong to the Uto-Aztecan language group. They have been moving back and forth between what is now the U.S. and Mexico long before either country existed. SB1070 criminalizes their traditional freedom of movement.

As Tupac understands it, the struggle against SB1070 is the continuing indigenous struggle against colonialism. As he said in a talk, “When we did that marching… we didn’t come to legalize ourselves before the state of Arizona. We came to legalize Arizona… Now, let’s get this clear, colonization is illegal… If we’re going to legalize Arizona we have to decolonize Arizona.” Elsewhere he has written that “SB1070 is not a law.” He makes this claim because he believes that the entire framework of laws governing immigration rest upon the Christian Doctrine of Discovery. For him, the Mexican and Central American migrants are indigenous and those who would keep them from coming to the United States are the descendants of colonizers.

Tupac and I were briefly reunited when I travelled back to Arizona to stand trial. After a day-long trial which touched on none of these issues the judge ruled us not guilty. Then Tupac set to work again to educate people about the Christian Doctrine of Discovery and passed around a flyer titled “SB1070 is Not a Law.”

Watch Tupac Enrique on a panel with Cornell West at North High School in Phoenix on October 2, 2010 at http://www.youtube.com/watch?v=S6t2esf1Hgk.

Colin Bossen is minister of the Unitarian Universalist Society of Cleveland. He keeps a blog at http://infidelity.blogsome.com/.

In this month’s Religion and Culture Web Forum, Jessica DeCou offers a comic interpretation of the theology of Karl Barth, bringing his work into a surprising and fruitful dialogue with the comedy of Craig Ferguson. Both men, she contends, “employ similar forms of humor in their efforts to unmask the absurdity and irrationality of our submission to arbitrary human powers.” The humor of Barth and Ferguson alike stresses human limitation against illusory deification. DeCou argues for understanding both the humor and the famous combativeness of Barth’s theology as part of this single project, carried out against modern Neo-Protestant theology. The Religion and Culture Web Forum is at: http://divinity.uchicago.edu/martycenter/publications/webforum/

Columns may be quoted or republished in full, with attribution to the author of the column, Sightings, and the Martin Marty Center at the University of Chicago Divinity School.