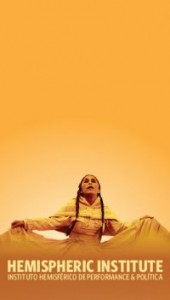 The Hemispheric Institute of Performance and Politics at New York University is now accepting applications for its fourth year of EMERGENYC, the Hemispheric New York Emerging Performers Program focused on “artivist” (artist/activist) performance. EMERGENYC aims to support the development of “hemispheric” artists ages 18 to 28 through a program of workshops and events between April 16 and June 24, 2010 (see “The Program” section below for details). We seek talented, committed and highly motivated young performers/activists/artists whose work functions as a vehicle for political expression and social change, and who examine the broad range of identities, practices and histories of the Americas (the western hemisphere, thus “hemispheric”) through genres such as spoken word, street performance, political cabaret, performance art, video performance, movement, and others.

New York City is a space of transformation in which expressive practices from throughout the Americas come into contact and combine into new artistic forms. The constant encounters and collisions of African-, Native-, Asian-, Latino- and European- American cultures that define the City, combined with the multiple political and counter-cultural movements that have flourished on its streets, are a key source of the artistic and activist innovation that has long characterized New York City. Experimental performance, hip-hop and salsa are powerful examples of the hemispheric fusions that the City’s neighborhoods have incubated. Anti-consumerism activism like Reverend Billy’s Church of Life After Shopping, artistic interventions such as the Guerilla Girls and Fulana’s If You Fear Something, You’ll See Something poster campaign are examples of the innovative conjunction of art and political protest. Drawing on this vitality, the program will enable young activists/performers to work with leading practitioners in the field, to take interdisciplinary leaps, and to develop their own strategies to use performance for social change.

Between April and June, the selected participants will take part in weekly workshops led by George Emilio Sánchez as well as by invited artists such as UNIVERSES, Reverend Billy and Savitri D, Fulana, Susana Cook, Pamela Sneed, Peggy Shaw (Split Britches), Tim Miller, Deb Levine (ACT UP), Aisha Jordan and Frantz Jerome (New World Theatre’s 2050 Legacy), and others. This year will also include a teach-in on Performance (“PerforWHAT?”) led by Hemispheric Institute Founding Director and NYU University Professor Diana Taylor. (We are in conversations with Guillermo Gómez-Peña, Patricia Hoffbauer, Anna Deavere Smith, and Karen Finley for possible workshops or artist talks—check emergenyc.org for updates). We ask applicants to define social issues that are important to them and to find a bridge to communities around those issues. Past participants have explored themes of racism, racial stereotypes, and racial violence; LGBTQ rights; war and human rights; gender and sexuality; religion; and gentrification, among others. They have created performance pieces around these issues, interviewed members of various communities, and led workshops in community programs (such as GLOBE/Make the Road New York), etc.

The program will be divided into three phases. Phase 1: every Saturday 10am-2pm from April 16th to May 21st, participants work closely with George Emilio Sánchez in developing performance and activist strategies, such as Boalian techniques, performance art and site-specific interventions. Phase 2: intensive daily sessions (10am-5pm) from May 28th- June 5th, participants work closely with leading activists, artists and scholars, and explore specific tactics for work in the field (street performance, interviewing, videotaping, seeing other people’s work, etc.). Phase 3: Saturdays June 11th June 25th participants refine their work for a final presentation, building on the strategies explored through the workshops. Final event (evening of June 27th): participants will share their strategies, performances, and experiences in a public forum.

Please refer to last year’s Schedule of Events to get an idea of the daily breakdown.

This program has a fee of $1000. Some financial aid will be available on a need basis, so don’t let money concerns stop you from applying. If your enrollment depends on financial aid, please let us know in your application.

This is what some EMERGENYC alumni have had to say about the program:

“EMERGENYC was such an important experience for me—both in the short term view of last year and in the long term view of my development as an artist and an activist. Last year was tough in a lot of ways, in part because it was such a big transitional year—my first year out of college, my first time living on my own. It was really easy to feel lost in all of that. EMERGENYC came at the perfect time: I found myself in a community of artists who were focusing on asking big questions about discrimination and identities and how to use performance to address both. Suddenly I had a supportive group of people encouraging me to try new things and challenging me to think more creatively and radically about power, politics, and performance. That community was incredibly important, and I plan to keep working with people from the program in the future. In many ways EMERGENYC fundamentally changed the way I think about my work. That’s probably the biggest long-term gift that the program gave me: the ability to root my work as an artist in my activism. For a long time I’ve struggled to unite the two; at times I even thought that I had to pursue either one or the other. Emerge also helped me think about new possibilities for “artivism” in performance and to start thinking about what I can do now, with the resources that I have at the moment. There’s really no other program like this.”

“EMERGENYC was the artistic and political opportunity I needed to start getting myself together as an artist and activist. I met people around the city doing amazing, fierce, and interesting work. I was pushed to hold myself to the vision I had for a better and more just world. It inspired me to see myself as part of a long tradition of creators and people who use art to challenge the status quo. Since EMERGENYC, I’ve stayed in touch with both the other students in the program as well as the teaching staff – EMERGENYC was a chance to work with legends in the field, artists I’ve always admired, and learn from them. I couldn’t recommend it enough for people who are looking for a thoughtful and challenging artistic experience.”

“I had an incredible time as a participant of EMERGENYC. Prior to the few months we spent together, I had never spent so much time with other artists. I really forged some strong bonds with some of the members, and have done shows with a few already, my art has been strengthened immensely. The only true way for me to sum up my experience is to say that I have never undergone so many transformations in such a short amount of time. I found my artistic voice as an adult in EMERGENYC, and that has been invaluable (and needs to be replicated in every city). I can’t wait to give something back to this program.”