It is a tragedy after another . Our Indians are decimated in front of us and let the thing roll . Today is the death of Jesus. tomorrow will be the resurrection . there will be no resurrection for our Indians , only death every day . We are Christians , atheists or any other religion , what matters is fight for our Indians ! At all costs ! With full force ! The death of our Indians is our death. Claudio

Guarani Indians are attacked by gunmen in broad daylight !

A gang of gunmen have been terrorizing one Guarani community in the state of Mato Grosso do Sul, since the Indians returned to their ancestral land . The action, which was recorded by one of the Indians, was performed by a gang , that is believed to have been hired by the farmers, occupying the lands stolen in the 1970s . Forests were destroyed to build the farms. 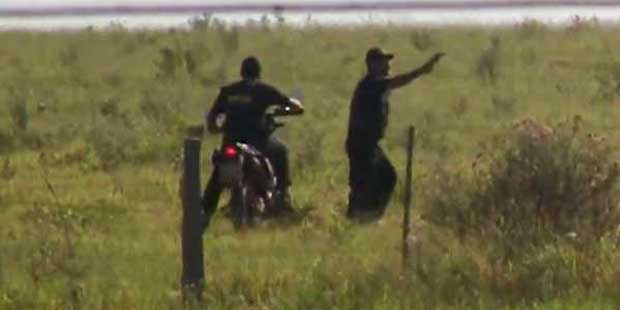 Recently, the Indian tribe Pyelito Kue managed to recover a small part of their ancestral lands , forcing the farmers that had taken their homes and locked out . However , since then, gunmen are threatening the indigenous people, surrounding them, shooting guns and even impeding the entry of doctors in the village. In the latest attack , recorded on video , one person was injured and others forced to flee , according to information from the Survival International .

Recently, the Brazilian police managed to close the security company called Gaspem, accused of killing at least two Guarani leaders and violently attacked hundreds of others. However , there are other companies that provide the same type of ‘safety’ service to farmers, action facilitated by the support of a strong bench or the rural lobby in the Brazilian National Congress. There are even some that encourage ‘ armed defense ‘ , as seen in this video .

” It is shocking to see the risks that my brothers Guarani are facing every day. They have the right to live on their own land in peace. We need everyone’s support so we can stop these farmers and to pressure the government to finally protect land Guarani. ” said Nixiwaka Yawanawá, a Yawanawá Indian from Brazil .

In regards to the video of  gunmen, the director of Survival International , Stephen Corry , said, “is a brief glimpse of what the Guarani have to endure month after month – harassment, intimidation and sometimes murder, just by trying to live in peace in small pieces of ancestral land that was stolen from them . It is too much to expect the Brazilian authorities, taking into account the billions they are spending on the World Cup , to solve the problem once and for all, rather than let this misery of Indians to continue? ” .

Throughout Brazil , thousands of Indians are protesting against proposed constitutional amendment that would give the Brazilian Congress , which is strongly influenced by the anti-indigenous caucus , the more influence the demarcation of indigenous lands . NGOs , including indigenous organizations , published a letter last week requesting that the government does not change the demarcation system , but focuses on demarcate and protect indigenous lands , as provided in the Constitution .