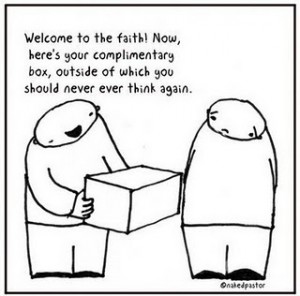 LOUISVILLE – “Don’t bring folks to where you are. Don’t leave them where they are. Go with them to a place neither of you has been,” said Brian McLaren to a group of Presbyterian Church (U.S.A.) national staff members here on December 3, 2010. McLaren, a noted author whose most recent books include Everything Must Change and Finding Our Way Again, spoke to some 50 staff from all six agencies of the PC(USA) on the topic of the future of the church.

“We’re part of a huge cultural shift,” McLaren told the Reverend Gradye Parsons, Stated Clerk of the General Assembly, in a video podcast the two recorded the same day. He encouraged those in mainline denominations to “wake up” each morning and say, “If we want our tradition to continue in the future, we have to give permission and encouragement for creative innovation and creative exploration, which will require us to go back and rediscover what it is about the gospel that’s precious. What does it really mean to be a Christian? What is our identity and mission in the world?”

McLaren proposed to the group of staff several steps mainline denominations like the Presbyterian Church (U.S.A.) can take to help foster “fresh expressions of church.” Among the steps are:

McLaren also challenged mainline denominations to think differently about denominational identity and ethos. For Presbyterians, he said this would mean regarding John Calvin as “radical,” given that he wrote the Institutes between the ages of 19 and 26, and approaching the Reformed tradition as “edgy, not stodgy.”

He encouraged Presbyterians to remember their roots in Geneva, where energy was directed toward addressing community concerns and the laity was empowered to put their faith into action. “Move from embodying ethos to evolving ethos and expanding relationships,” he said.

Those relationships extend to the “nones” — those who regard themselves as spiritual rather than religious — which is the fastest growing religious group in the United States. McLaren said that these folks are asking, “Can you accept me where I am and lead me gently and wisely to a better way of life so that I can play my part in bettering the world?”

He said, “We need to encourage the development of new congregations that are focused not on competing for a share of the religious market, but focused of helping the “nones” rediscover a vibrant faith in Christ and a life-transforming community of faith.”

When it comes to the world, McLaren identified four “absolutely terrifying emergencies on our doorsteps” — the planet, poverty, peace, and religion.

“If you want to change a society,” he said, “you have to tell an alternative story … and religion provides us the framing story to go into the world to tackle these problems.”

“Could it be that the Presbyterian church is worth saving and leveraging what it has to address these emergencies?” he asked.

“As you think of your future,” said McLaren, “think about not saving the church, but saving the world.”