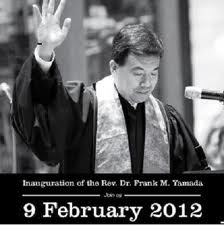 By 2040 there will be no majority racial ethnic group in the United States, so theologians and seminaries must lead the way in “helping us see our futures in the plural lest we die in our lack of understanding of each other,” said the Rev. Frank Yamada in his inaugural address Feb. 8 as the 10th president of McCormick Theological Seminary here.

Speaking to a crowd of several hundred McCormick supporters that was nevertheless dwarfed by the cavernous Apostolic Church of God where the inaugural was held, Yamada said the coming egalitarian demographic “is good news,” adding, “It doesn’t mean racial inequality will vanish and racism will end, but that diversity will no longer be a goal or an ideal but a reality ― a more diverse image of who we are as a people.”

Yamada said “our attempts to make futures a singular future is our problem. There is something alluring about trying to reduce life to the singular.”

American society has failed by only seeing racial and cultural diversity as “a problem to overcome. That’s why we get silly policies like ‘English-only’ education,” he said.

And though 21st century life is becoming more and more complex, said Yamada ― the first Asian American to serve as president of a Presbyterian seminary ― “God’s truth is often simple and clear: love God, love neighbor. If we could get these correct, the world would be a far better place.”

The mission of the church and of its seminaries is equally simple, Yamada said ― to teach, proclaim and live the Good News. “But all of our planning and bureaucracy are attempts to fend off institutional collapse, not spread the gospel.”

Yamada said he embarks on his McCormick presidency with “great hope for our futures,” but not solutions. Those, he said, belong to God.

“I don’t know the answer and for awhile it really bothered me because everyone else seems to have answers and visions,” he said. “What I know is that the futures will be different, but how and what they will look like and how we are in alignment I can’t tell.

“Instead of what is my vision or our vision, the question is ‘what is God’s vision?’ Yamada said.  “What is God up to in the world? That turns my faith in myself or in others’ answers into faith in the One who holds the future of the world. Because this is God’s work, my thinking can turn to listening.”

Yamada said there is already a diverse generation of religious leaders ― such as Muslim youth activist Eboo Patel ― “who see this vision and they might change the world if we let them.”

Technolological advances are revolutionizing education. “If we listen, these amazing things in education are already happening,” he said. “We just have to listen and let them play, let this generation loose in the classroom and in the church ― they will transform both.”

Setting people of faith loose to pursue God’s futures ― “giving this and coming generations the freedom to play, will create a future more faithful than we could ever imagine,” Yamada said. “Another Pentecost ― cacophonous and beautiful.”