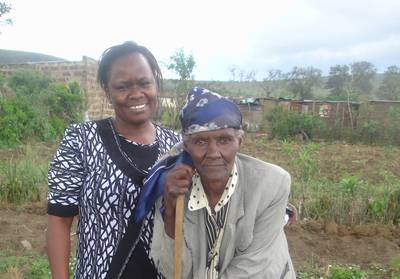 Pauline Wanjiru Njiru with one of Kenya’s Grandmothers against Poverty and AIDS. Now in her 80s, Naomi has been bent over since she broke her spine while cutting firewood in order to cook for her orphaned grandchildren.

The shock expressed by members of a rural congregation when offered an opportunity for voluntary HIV testing and counselling, and other similar experiences have taught Pauline Wanjiru Njiru that it is not the Human Immunodeficiency Virus that kills people, but fear, stigma and ignorance.

People are ignorant of the basic facts about HIV and AIDS, and they stigmatize others because they fear being associated with HIV and they fear infection, says Njiru, who works with the Ecumenical HIV and AIDS Initiative in Africa (EHAIA). Because of the stigma, people are unwilling to undergo testing.

However, Njiru has learned that a contextual style of Bible study is one of the keys to helping the church overcome the stigma of HIV and AIDS and saving lives.

“If you talk about HIV, it means that you are HIV positive.” These are words Njiru heard from a participant in a workshop she facilitated in 2009 in Southern Sudan (now the newly independent nation of South Sudan). Even today the words are still ringing in her ears.

In another workshop on the outskirts of Nairobi, participants claimed HIV was not a problem in their community. In Tanzania church leaders confessed their failure to see that churches’ attitudes have stigmatized people living with HIV and fuelled the spread of the virus.

A significant part of Njiru’s ministry has been spent in the parish and in teaching theology both in university and in a seminary, doubling as lecturer and chaplain. She was ordained as a priest in the Anglican Church in 1992.

The EHAIA programme, which is part of the World Council of Churches, promotes HIV testing and building HIV-competent congregations and parishes.

Leadership does not always come easy

As a pastor, Njiru appreciates the predicaments confronting church leaders: fear, ignorance and stigma. Despite their calling to preach the good news that promises fullness of life, they find it difficult to detach the reality of HIV infection from sexually immoral behaviour. However, as children born with HIV now turn to adults and ask “what did we do to be HIV positive?” Christians cannot overlook mother-to-child transmission of HIV.

The story of Rahab, an Anglican clergywoman living with HIV, confirmed to Njiru that whereas HIV awareness has intensified some church leaders are still struggling to grasp the real issues. Shortly before Rahab was to get married, a bishop who knew of her condition advised her fiancé to cancel the engagement. On hearing this, Njiru looked for Rahab and found a woman broken by HIV stigma, the relationship with her fiancé shattered, and no one to turn to.

Rahab has since gone back to her community and disclosed her status to her bishop, her mother and community. She now leads a support group for people living with HIV and a youth group in her parish.

She has also earned a scholarship to do a masters degree in HIV and Community Care from a Christian university. Rahab is building a model HIV competent parish among people who had originally rejected her.

Formerly homeless people and grandmothers rise to the challenge

HIV competence sometimes arises in unexpected situations. Kariuki and Njeeri got married and had four children while living in the streets of a slum in Nairobi, Kenya. The couple is HIV discordant, that is to say only one of the two has the virus. The family was escaped street life because of a “Good Samaritan” who rented a room for them and offered them a weekly allowance.

EHAIA has been mentoring the couple since 2009 and has seen them make the best of the help they received in order to help others. They have laboured tirelessly helping children leave street life behind, getting them tested for HIV and enrolled in schools and children’s homes, or for older children in schools for skilled training.

The couple has also provided a place of worship for these children and youth. In total they have seen more than 70 children and youth pass through their doors to gain education, training and spiritual nurture. If any is found to be HIV-positive, the couple helps them receive much-needed medical follow-up and treatment.

Similarly, grandmothers have been doing their part. Recently, Njiru and a group of participants in an EHAIA-facilitated workshop visited Grandmothers against Poverty and AIDS, a programme in rural Kenya. Njiru is still digesting what she saw and heard from women deeply wounded by HIV stigma. Stigma led to them losing the children whom they had hoped would take care of them in old age. Instead the women are now struggling to bring up their orphaned grandchildren.

The fight against stigma, a ministerial calling

Stigma thrives on ignorance and fear, and robs people of their God-given dignity. Still the “era of HIV presents church leaders, both women and men, with a challenge as well as an opportunity for ministry”, says Njiru.

In order to address the root causes of the pandemic, EHAIA activists like Njiru are crisscrossing the Eastern Africa facilitating capacity-building workshops with church leaders, theological educators, HIV activists and people living with HIV. Stigma, shame, denial, discrimination, inaction and mis-action (SSDDIM) are addressed through liturgy, church assemblies and synods, and the full range of church ministries including Sunday school and catechism classes.

A major challenge is the inadequate response by church leaders to the key drivers of the pandemic, issues of gender inequality, sexual and gender based violence. Njiru has been training churches’ leaders to use contextual Bible study as a tool to help them engage with the issues as well as SSDDIM. One powerful example has been the exploration of attitudes toward the woman at the well as told in John 4:1-26, and Jesus’ acceptance of her.

As more church leaders are introduced to the contextual Bible study methodology, they are beginning to confess that the traditional way of reading and interpreting scriptures has contributed to inequality and discrimination against women, fostering sexual and gender-based violence and negative masculinities.

The Bible study workshops empower both women and men to address human sexuality, including attitudes and practices that destroy healthy relationships in families and in the churches. Leaders have called for an expansion of the Contextual Bible Study Manual on Gender-Based Violence (FECCLAHA 2007) that is currently in use and have asked that it be translated into additional regional languages. The manual already exists in English, French, Portuguese, Kiswahili, Malagasy and Amharic.

This article is the 7th in a portrait series presenting the work that EHAIA is doing through its regional coordinators and theological consultants. The series is published ahead of EHAIA’s 10th anniversary coming up in April 2012.