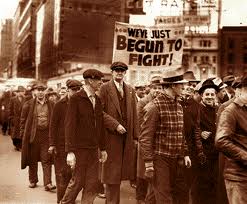 Most of us don’t automatically connect religious leadership to the cause of organized labor. At a time when unions are on the defensive and the unionized share of the private sector workforce is at an all-time low, maybe it’s time for folks on the religious side to think again about what unions are and do.

Unions are simply vehicles for workers to associate and unite for the sake of personal and communal advancement. In a badly atomized society in which anxiety and stress about getting ahead individually have such obvious destructive effects, how bad can this be?

In strictly economic terms, strong unions actually promote technological innovation by raising the cost of labor in relation to the cost of capital. Thus Germany, the most heavily unionized nation in Europe, is also the most productive economically. Unlike the U.S., which from 1980 onward has taken a low-road path to productivity by having people work harder and longer for less money, Germans still take the high road, keeping median worker incomes high by investing in and applying technological innovation rather than applying sheer sweat and exploitation to the productivity challenge. In service jobs that are relatively impervious to technological change (waiting tables, making beds), unionization still helps to keep labor from being totally degraded, which is not nothing in a job market now split between a limited number of high-income jobs at the top and a mass of junk jobs at the bottom.

It’s unfortunate that most white Protestants in the U.S. have always viewed unions with some degree suspicion, thinking of them as vaguely foreign (literally), vaguely Catholic (and/or Jewish), and thus vaguely alien to Our American Way Of Life. In fact, nothing is more American than the “chants democratic” expressed by grassroots labor organizing and union bargaining for a better future. Our once-strong unions gave us so many things that we used to take for granted–weekends, paid holidays, health and safety protections, decent pensions, employer-provided health care–but that are now under serious assault from our corporate overlords.

Unions today remain the primary advocates for comprehensive immigration reform, adequate regulation of the financial sector, expanded public infrastructure investment, and full funding of quality public education at all levels: all measures that make good economic and social sense but that are fought tooth and nail by the privatizers and corporatists in both political parties.

I urge religious leaders who still tend to lift their skirts and pass quickly by union picket lines and demonstrations to think seriously about this: societies that sharply limit or even liquidate their labor movements all tend toward fascism, whereas robust democracies all strongly support labor rights and workplace democracy.

As the old song has it, Whose side are you on?

“We cannot seek achievement for ourselves and forget about progress and prosperity for our community… Our ambitions must be broad enough to include the aspirations and needs of others, for their sakes and for our own.” – Cesar Chavez

“A community is democratic only when the humblest and weakest person can enjoy the highest civil, economic, and social rights that the biggest and most powerful possess.” – A. Philip Randolph

“I learned in the early part of my career that labor must bear the cross for others’ sins, must be the vicarious sufferer for the wrongs that others do.” – Mother (Mary Harris) Jones