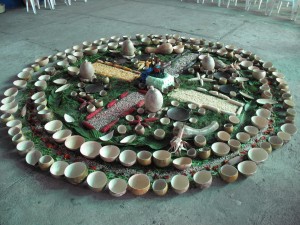 The subject of illegal immigration continues to spark passionate debate across the nation, and as the 2012 election heats up, the issue can be expected to take a central role on the political stage. In a highly unusual turn of events, many religious groups — otherwise divided on social issues, such as gay marriage or abortion — have found themselves aligned in their support of immigrant rights, including brokering pathways to legality for the undocumented. While these organizations’ ideas concerning how to accomplish this goal vary (some support pushing legislation such as the DREAM Act, while others propose incorporating fines, probationary periods, straight away amnesty and other steps), Christian groups across denominational lines have backed humane immigration reform, while also condemning anti-immigrant laws such as Arizona’s SB 1070 and its copycat counterparts in other states.

For most of these groups, this pro-immigrant stance is rooted in their Christian faith and in core biblical principles such as love, mercy, hospitality,and the ethical imperative to help those who are less fortunate.

But is this position truly substantiated in the Bible? Or are the biblical stories, injunctions and teachings being taken out of context to support political claims?

Not all Christians exhibit such scripturally inspired generosity for the undocumented, as evidenced by the hard-line attitude of former GOP presidential candidate Herman Cain, who joked about constructing a fence along the whole border that would electrocute migrants, or that of Michele Bachmann, who said that even the children of the undocumented deserve nothing from us — not to mention Mitt Romney, whose unequivocal rejection of any path to legality for “illegal aliens” may cost him dearly in the election, according to many pundits.

Nonetheless, there are millions of American Christians — harkening variously from Catholic, mainline Protestant and evangelical traditions — who “share a set of common moral and theological principles that compel us to love, care for and seek justice for the stranger among us,” according to the umbrella group Christians for Comprehensive Immigration Reform.

These principles are rooted in Old Testament injunctions to love neighbor as self, including the “alien who shall be to you as a citizen among you,” as well as New Testament stories such as the Good Samaritan, which picks up on this call to love “the least of these,” whosever they may be, regardless of race, citizenship or social status. The coalitions also ground their arguments for humane border policies and merciful treatment of the undocumented in the many biblical narratives involving forced migration, uprootedness, exile, homelessness; in an egalitarian ethic rooted in the belief from Genesis that all humans are created equally in the image of God; and on the themes of justice, mercy and unconditional love woven consistently throughout the Scriptures. According to Jean Bethke Elshtain, Professor of Social and Political Ethics at the University of Chicago Divinity School, “Overwhelmingly, Scripture is filled with an imperative to offer succor and kindness to the stranger, to the bereaved, the homeless, et cetera.”

On the other hand, there are those Christians who turn to the Bible to support their anti-immigrant rhetoric, although their arguments are limited mostly to Romans 13, and a handful of other passages that emphasize the divine warrant for authority and a citizen’s duty to respect and obey the rule of law. But the faith-based immigrant advocacy groups believe that these passages are vastly outweighed by those urging radical hospitality for the stranger, as do many theologians and clergy.

“So much of the Bible and Christian tradition line up against this view; there really are not many places they [Christians opposing aid for the undocumented] can go to in the Bible,” says M. Daniel Carroll R., Professor of Old Testament at Denver Seminary and National Spokesperson on Immigration for the National Hispanic Christian Leadership Conference.

Still, using the Bible to justify contemporary political convictions is inherently problematic. While the ethical impulse to dismantle unjust laws may be inspired from Scripture, as was the case, for example, when Martin Luther King engaged in civil disobedience, one must also guard against the pitfalls of proof texting — taking isolated passages out of context to legitimize a certain ideology. The problem with proof texting is that it disregards the original intent and context of the author. As Elshtain says, “Scripture could in no way have imagined the modern nation-state, issues of borders and citizenship and all the rest.” The idea of democracy, she points out, is a modern concept, and so too the idea of the state and meaningful membership in a state as a citizen; proof texting, then, can lead to irresponsible, even dangerous, conclusions.

“Since the Bible can be used to justify anything such as slavery, racism, bigotry, anti-Semitism, war and even anti-immigration sentiments, proof texting in immigration debates is futile. The Bible cannot be used as some kind of divine answer book for complex problems like migration. But it can challenge the operative narrative in our minds and hearts that affect how we evaluate the issues,” says Daniel Groody, Catholic priest and Associate Professor of Theology at Notre Dame.

As the National Association of Evangelicals’ latest immigration resolution put it: “The Bible does not offer a moral blueprint for modern legislation, but it can serve as a moral compass and shape the attitudes of those who believe in God.”

So while we cannot rely on Scripture to enact public policy per se, we can read the Bible — or other religious and humanist texts that grapple with the relationship between self and other, citizen and stranger, the fortunate and the less fortunate — as a means of awakening in us a heightened moral consciousness. We can hope that this exercise might inspire more humane discussion in the public sphere concerning the plight of migrants, and might lead to more just and equitable solutions at our borders.