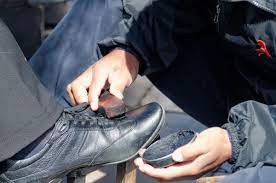 This precious brother from India sent me an email this morning with this poem about a shoe shining boy. I don’t know him but I was deeply moved. He allowed me to post the poem.
Eyes! On your feet
By James
It is one of the busiest Railway stations
Trains come and go every fifteen minutes
People come and go for their work
A social process or a vicious life cycle?
A gentleman standing on the platform and looking straight ahead in the opposite direction
A man bowed under his feet, polishes his shoe
Personally denies socially agrees
One foot on the platform another on the round stone
One foot is a scene from common everyday life
Another foot belongs to the oppressors’ arena, conscious or not
A man bowed down holding a shoe brush with his right hand
The fingers of his left are pressed against the ‘gentleman’s’ shoe
It is almost like an author writing a book
Or perhaps like an artist with his paint brush
Right hand shows his profession
Left hand shows his misery and oppression
Both hands are covered with dirt and dots, brown and black from shoe polish
His chakku (Jute Bag) is filled with rugged old shoes and chappals
Nails and hammer and shoe polish
Knife and needle are in front of him
A round stone is his workshop, as well as flint stone
Profession veils
Social situation reveals
He sits on the platform but a cloth is spread in front of him
For his customer’s foot shouldn’t be dirty; right?
He cannot afford to sit with his legs folded
One leg is folded vertically
Another leg is folded horizontally
One is casteism and the other is poverty
Now both shoes are shining
The Cobbler finally looks up But the ‘Gentleman’ first looks at his own shoe, now shining bright
With full satisfaction he nods his head in approval
”Ten rupees” comes the response and the answer; or perhaps an appeal?
‘Gentleman’ hands out five rupees and a few coins Rushes to board the train
But the cobbler prefers sitting at the same place
He is not missing any train
Who said there was a train to catch in the first place?
He sits in the place that is made for him by others,
And ironically by himself for himself and for others who take up after him
For generations to come?
The eyes of the cobbler wander
His eyes are on your feet.
By Cláudio Carvalhaes | May 10, 2022 | BLOG |