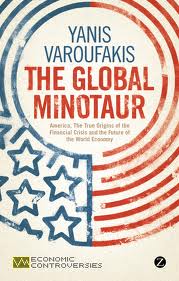 As 2011 is drawing to a close, with the ECB only having managed to paper over the deepening cracks of the eurozone, it is time to allow ourselves to abandon the barricades for ten days or so. If the soldiers in the Great War’s killing fields could maintain a humane ceasefire, tend to the wounded, and bury their dead,  we too can afford to put a cap for a while on our hectic rythm. Anyhow, the Crisis will be back with hideous vengeance soon after the New Year.  So, time to switch off our gadgets, look after those whom we have neglected, and reflect on a truly awful year. For my part, I am flying soon to Sydney to be with my daughter. I wish you all a happy holiday and a New Year worthy of the many good people who suffered needlessly during 2011.

Lastly, since 2011 was the year of ‘my’ Minotaur, I leave you with this fable (which sums up in few words my book’s gist):

Once upon a time, in the famous maze-like Labyrinth of the Cretan King’s Palace, there lived a creature as fierce as it was tragic; its intense loneliness comparable only with the fear it inspired far and wide.

You see, the Minotaur, for this was its name, had a voracious appetite which had to be satiated to guarantee the King’s reign – the ironclad Minoan reign which secured Peace, enabled trade to criss-cross the high seas in bountiful ships, and spread prosperity’s benevolent reach to all corners of the known world.

Alas, the beast’s appetite could only be satiated by human flesh. Every now and then, a ship loaded with youngsters sailed from far away Athens bound for Crete – to deliver its human tribute to be devoured by the Minotaur. A gruesome ritual that was essential for preserving the era’s Peace and for reproducing its Prosperity.

Its lair, a form of Labyrinth, was located deep in the guts of America’s economy. It took the form of the US trade deficit which consumed the world’s exports. The more the deficit grew the greater its appetite for Europe’s and Asia’s capital with which this American Minotaur satiated its hunger. What made it truly Global was its function: It helped recycle financial capital (profits, savings, surplus money). It kept the gleaming German factories busy. It gobbled  up everything produced in Japan and, later, in China. And, to complete the circle, the foreign (and often the American) owners of these distant factories sent their profits, their cash, to Wall Street – a form of modern tribute to the Global Minotaur.

What do bankers do when such a tsunami of capital comes their way daily? When between 3 and 5 billion dollars, net, passes through their fingers every morning of each week? They find ways to make it grow! To breed on their behalf. Thus, the 80s, the 90s and the naughties saw an explosion of private money minting by Wall Street on the back of the daily capital tsunami that flowed to America to feed the Minotaur.

Just like its mythological predecessor, our Global Minotaur kept the world economy going for decades. Until, that is, the pyramids of private money built upon the Minotaur’s feeding tribute collapsed under their own impossible weight. Planet Earth was simply not large enough to hold so much private, toxic money; money-like paper that burnt down once the collapse began. In this conflagration, the Global Minotaur was wounded critically.

While in rude health, the Minotaur produced tremendous wealth and despicable inequality, new vistas of pleasure and new forms of deprivation, ample security for a few and crippling insecurity for most, great inventions/gadgets and spectacular failures of common decency. Whatever we think of the Global Minotaur’s reign, it kept the world going and its elites thinking that their regime was stable, successful, moderate even. With the Minotaur out of sight, keeping the show going from its secret Labyrinth, its gross excesses remained out of sight, helping the great and the good believe their own rhetoric about some Great Moderation that was supposedly the order of the day.

But, when the Minotaur keeled over, mortally wounded by the excess of its handmaidens in Wall Street, it left the global economy in disarray. In America and in Europe, in India and in China, the Minotaur’s demise has put the world into a permanent crisis.

The Cretan Minotaur was slain by a brave Athenian Prince. Theseus. Its death ushered in the new era of tragedy, history, philosophy. Our very own Global Minotaur died less heroically. A victim of Wall Street bankers. What will its demise bring? Should we dare hope of a new era in which wealth no longer needs poverty to flourish? In which development means fewer ashes and abstract power wanes while everyone gets stronger?

Whatever the result of history’s mysterious ways, the Global Minotaur will be remembered as a remarkable beast whose 30 year reign created, and then destroyed, the illusion that capitalism can be stable, greed a virtue and finance productive.