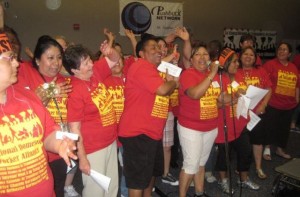 This week, just in time for Labor Day weekend, New York Gov. David Paterson signed into law theDomestic Workers Bill of Rights. The new law, which takes effect in November, is a massive and unprecedented win for the new labor movement—and it is a model for the way organizers and lawmakers alike must begin to think about workers’ rights in the 21st century economy.

The New York law requires overtime pay for nannies, housekeepers and companions to the elderly*, guarantees them weekly time off and subjects employers to state law for minimum-wage violations and sexual harassment. These are all basic rights that traditional, full-time employees have long enjoyed, but that a broad swath of workers who are not protected by labor laws have never seen. Last week, the California State Assembly passed a resolution recognizing similar labor standards for domestic workers, rights that lawmakers will likely codify as state law next year. Organizers in other states are working to generate more such victories.

The amazing New York win, spearheaded by Domestic Workers United (DWU) and the New York Domestic Workers Justice Coalition, has received its fair share of congratulations. But this is more than a moving story of downtrodden women confronting the system. Over the longterm, DWU’s approach to labor rights should shape the larger, national project of designing a new economy that doesn’t slowly kill off its workers.

DWU is not a union, but rather what’s called a “workers’ center.” These small and scrappy but rapidly maturing collectives have formed the last line of defense for primarily workers of color who are excluded, either deliberately or by default, from U.S. labor protections. DWU’s ability to raise public consciousness about such exclusions, its innovative organizing of thousands of dispersed workers who have thousands of disparate employers, and the issues it will confront in implementing the new law raise critical questions for all economic justice activists.

Gov. Paterson’s press secretary drew a bold analogy on signing day, calling the Domestic Workers Bill of Rights the governor’s own version of the Emancipation Proclamation. That boast sounds exaggerated, but the current work life of domestic workers is in fact deeply rooted in post-Civil War racial politics.

The Roosevelt administration passed many enduring economic reforms in the 1930’s, including the Social Security Act and the National Labor Relations Act. The latter made it easier for workers to form unions and bargain collectively with their employers. Domestic and farmworkers, however, were explicitly excluded from both laws, a deal that allowed Roosevelt to gather the votes of Southern, white congress members, among others. At the time, 95 percent of domestic workers were black women in the South. Most agricultural workers were Black, Filipino or Mexican.

While Roosevelt’s labor protections have expanded over time (farmworkers were included in 1966), the combination of formal exclusion and practical non-enforcement still leaves millions of workers on their own. Most Americans don’t likely know the broad swath of workers who aren’t protected by labor laws. They include, for instance, workers who are considered independent contractors (such as taxi drivers and home daycare providers) and people working for tips (restaurant servers and runners haven’t seen their federal minimum wage rise in 20 years). Workers who receive public benefits through workfare programs, immigrant workers (day laborers, guest workers) and workers in right-to-work states are all excluded from varying sets of rights, either deliberately or by the lack of enforcement. Formerly incarcerated workers are subject to background checks when they apply for jobs, regardless of the severity of their conviction or the amount of time that has lapsed.*

Moreover, these workers have long been abandoned by unions that lack either the interest or the capacity to organize them. But for some years, workers’ centers like Domestic Workers United and their sister organizations have been stepping into that void—and often winning substantial changes. The Restaurant Opportunities Center of New York, which I wrote about in The Accidental American, has improved labor conditions in some of the city’s biggest restaurant chains, replicating many elements of union contracts, even though they are not a union.

DWU started organizing 10 years ago. Having won the landmark New York law, they will now focus on making sure it is enforceable, by changing regulations such as those that govern how workers file complaints, so that their employers can’t retaliate. DWU will also advise the state Department of Labor on educating workers and employers about the new law, and will do its own outreach through workers and through an alliance with Jews for Racial and Economic Justice.

While workers’ centers like DWU can play a critical role in fixing the labor economy, they have been hamstrung by the fact that they cannot collectively bargain and cannot collect union dues from an organized workplace. “The traditional collective bargaining framework poses a challenge because of how the industry is set up,” says DWU organizer Priscillia Gonzalez. “There’s no central work site, and no common employer. Also, there is this dynamic that because the work takes place in someone’s home, the people who are hiring don’t see themselves as employers.”

DWU is investigating ways to get the government to hold employers accountable even in the informal economy. Can that be done by legislation or regulation, if not by collective bargaining? It’s a critical question for all workers’ centers, and for all lawmakers.

It’s also becoming a more broadly relevant question every day. As our economy continues shifting toward service and information industries, more and more formerly middle-class and white workers have seen their jobs similarly “contingentized” as domestic workers and day laborers. As employers load up on temporary, subcontracted and part-time workers rather than full-time employees, they avoid paying into Social Security and providing unemployment insurance, health coverage, and workers’ compensation. The can even avoid providing vacation or sick days.

“Labor laws aren’t sufficient anymore to protect the rights of workers, whether in the minimum standards or the rules of the NLRA,” said Ai-jen Poo, a co-founder of DWU who is now directing the National Domestic Workers Alliance. “There were flaws and holes because so many people were excluded. But even for those workers [labor laws] were meant to protect, they’re failing because the economy has changed so much.”

People of color and women certainly remain over-represented in this category. Those employed by temp agencies, for example, are more likely than traditional workers to be black or Latino. But the job sectors that have been heavily contingentized in the past 20 years range from professors, editors and writers to tugboat operators and museum guards.

The question of how to adjust to these economic arrangements has to concern traditional labor unions as well as workers’ centers. A number of unions helped DWU win in New York. The doorman’s union was particularly active, in large part because doormen in luxury apartment buildings have plenty of opportunities to witness first hand the abuse of domestic workers. Nonetheless, unions have an outdated organizing model, even when they are progressive on racial and gender matters. They go into a large workplace with a single employer, organize it, win an election and bargain for a new contract. As such workplaces disintegrate, however, unions have been slow to adjust and quick to lose members. Unlike workers in other countries, for instance, when American workers lose their jobs, they also lose their union memberships.

Nor is there any real trans-nationalism in American unions, although the U.S. workforce is increasingly foreign-born with strong global ties, including dependent family members. By contrast, DWU and the national alliance have worked with the International Labor Organization to produce a convention on the rights of the domestic worker and build, for the first time, global standards governing the industry.

“The experience of domestic workers challenges the framework we’re used to for labor law,” said Poo. “Maybe instead of talking about minimum wage, we need a floor wage. Or instead of inclusion in [existing] labor law, we need new laws.” If we’re going to develop a vision for protecting workers in the 21st century, it is far more likely to emerge from the people on the margins of the American labor movement than from those at its traditional center. This week’s New York victory is a welcome, hopeful start.

*A previous version of this post incorrectly reported that the New York law addresses overtime pay for home health aides. We also reported that formerly incarcerated applicants are the only ones subject to background checks; they are the only workers who are checked regardless of the the type of job they are seeking.