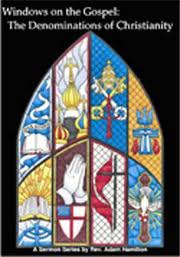 A quick, but important caveat: I teach at a denominational seminary, was ordained into and serve in a denomination — and therefore have much of my retirement savings tied to a denominational pension plan — and not only take seriously, but take pride in, my Lutheran identity and heritage. (Whether that makes you want to take more seriously or dismiss altogether my feelings about denominations is, of course, for you to decide.) Despite my obvious denominational loyalty, however, I’m not sure Christian denominations have a future — or whether they even should.

In fact, here are five reasons that I not only suspect the day of denominations has passed but also can’t seem to find it in me to shed many tears about it.

1) Denominations are incredibly confusing in a post-Christian world. When the larger culture was nominally Christian, believers had the luxury of squaring off behind denominational identities. No longer. Ask the typical person with little or no familiarity with the Christian faith the difference between Methodists, Lutherans, and Presbyterians and she’ll likely give you a blank stare that indicates she’s wondering whether you’re still talking about Christianity. The facts of the matter are pretty straightforward, if not that encouraging: most people in the various denominations have little sense what they mean and absolutely no one outside them really cares.

2) The theological differences between the major denominations are relatively minor. As much as I love a good real-presence vs. memorial-feast slugfest or round of justification/sanctification truth-or-dare, the truth is that most of the theological differences between denominations not only are unintelligible to their own members but are, in the larger scheme of things, relatively minor. Across the board, the major Protestant denominations, for instance, share a biblical canon, confess the major ecumenical creeds, and observe the same two sacraments. I therefore can — and regularly do — worship at churches of any of the major denominations and feel not the slightest tremor in my theological conscience.

3) Inordinate amounts of funding are spent on maintaining denominational structures and bureaucracies, money that could be spent on mission. Even though every denomination I know has in recent years cut way back on spending, eliminated various divisions or boards, or extended the times between major assemblies or conventions, denominations are still expending vast sums of money to prop up dated denominational bureaucracies. Would it not make sense to conserve resources by efficiently combining structures? Are seven or eight struggling denominational publishing houses better than one robust one? Where there are three beleaguered denominational seminaries in a single region, might not one healthy pan-denominational school suffice? (And we haven’t even started on congregations!) Think of what might happen if the savings were channeled to funding creative media campaigns that didn’t extol the virtues of one denomination but taught the Christian faith.

4) Political differences outstripped theological ones decades ago. Let’s face it: progressive Lutheran, Presbyterian, and Episcopalian congregations have a lot more in common than do progressive and conservative congregations in the same tradition. Differences over how to read the Bible, the nature of the atonement, and the character of God are far more important today than nuanced differences in polity or regarding the sacraments.

5) Denominational affiliation often represents the triumph of ethnic and cultural loyalties over theological convictions. While denominations may have initially arisen over theological differences, they were soon co-opted by the political realities of their sponsoring state. Little wonder, then, that ethnic and cultural identity is closely tied to denominational affiliation. Those in the club, after all, talk not simply of Presbyterians and Lutherans but Scotch Presbyterians and Swedish or GermanLutherans. This has always made it difficult to reach beyond one’s ethnic enclave because interested seekers, even if they were attracted to, for instance, Lutheran theology, had to accept it in the form of German chorales or Swedish traditions. Moreover, as ethnic culture has declined as an important identity-maker, so also has religious affiliation — after all, for many folks, if Lutheranism isn’t about Santa Lucia, what is it about? And if they’ve stopped going to the Santa Lucia festival, why bother with church?

This makes some of my tribe, I know, rather nervous. But lest we imagine that denominations are, like the Holy Trinity, one of those things that, “always have been, are, and forever will be,” perhaps a few words from one of the original Reformers will ease our fears. Just a few years into what would eventually be called the Protestant reformation, some of the followers of Martin Luther began to take his name for their cause. Luther, however, was neither amused nor pleased. In 1522 he wrote the following in a public treatise:

I ask that people make no reference to my name; let them call themselves Christians, not Lutherans. What is Luther? After all, the teaching is not mine. Neither was I crucified for anyone…. How then should I — poor stinking maggot-fodder than I am — come to have people call the children of Christ by my wretched name? Not so, my dear friends; let us abolish all party names and call ourselves Christian.

Not a bad idea, if you ask me. In fact, if denominations have a future, perhaps it rests precisely in taking the counsel of their founders to heart.