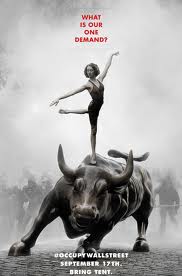 [Nice echo of the Declaration of Independence.]

As we gather together in solidarity to express a feeling of mass injustice [good start—the bailout WAS mass injustice—I’m still pissed-off about it], we must not lose sight of what brought us together. We write so that all people who feel wronged by the corporate forces of the world can know that we are your allies.

As one people, united, we acknowledge the reality: that the future of the human race requires the cooperation of its members; that our system must protect our rights, and upon corruption of that system, it is up to the individuals to protect their own rights, and those of their neighbors; that a democratic government derives its just power from the people, but corporations do not seek consent to extract wealth from the people and the Earth; and that no true democracy is attainable when the process is determined by economic power. [More Declaration of Independence cadence.]

We come to you at a time when corporations, which place profit over people [unfair blanket smear], self-interest over justice [also an unfair smear], and oppression over equality [oh, please—Procter & Gamble makes toothpaste—it’s not their job to worry about “equality”], run our governments [“run” is a bit strong, but “influence” is certainly fair].

We have peaceably assembled here, as is our right, to let these facts be known.

They have taken bailouts from taxpayers with impunity, and continue to give Executives exorbitant bonuses. [Oh, yes]

They have perpetuated inequality and discrimination in the workplace based on age, the color of one’s skin, sex, gender identity and sexual orientation. [In some cases, yes, but, again, a blanket smear]

They have poisoned the food supply through negligence [In some cases, yes], and undermined the farming system through monopolization. [You probably mean “consolidation,” not “monopolization,” but fine. Your food is now cheaper as a result of this consolidation, though.]

They have profited off of the torture, confinement, and cruel treatment of countless animals, and actively hide these practices. [Fair.]

They have continuously sought to strip employees of the right to negotiate for better pay and safer working conditions. [You mean they’ve tried to discourage the formation of unions? Okay. But unions cause a lot of problems, too. See the car industry bankruptcy, for example.]

They have held students hostage with tens of thousands of dollars of debt on education, which is itself a human right. [Oh, please. Grow up. The students borrowed the money. Don’t blame the lenders for asking them to pay it back. And since when is education a “human right”? UPDATE: A couple of readers have pointed out that the UN has, in fact, declared education a right, at least elementary education. I’m not sure I agree with the UN, but I stand corrected. That said, it’s clear the UN is referring to basic education, not college and professional educations, which are generally what lead to student loans. Basic education is, in fact, free in the United States. And no one takes out student loans to go K-12.]

They have consistently outsourced labor and used that outsourcing as leverage to cut workers’ healthcare and pay. [You mean they have reduced costs to remain competitive? Yes, some of them have. And they’ve had to. Many corporations have increased pay, however—see Google, Facebook, Apple, and Wall Street. And it’s not fair to blame the healthcare mess on companies. Employer-provided health insurance should be a benefit, not a right.]

They have influenced the courts to achieve the same rights as people, with none of the culpability or responsibility. [The second part is wrong—plenty of companies get in legal trouble—but I’ll leave first part to the legal scholars.]

They have spent millions of dollars on legal teams that look for ways to get them out of contracts in regards to health insurance. [In aggregate? Possibly true. But many, many companies—probably the vast majority—have provided good health coverage for their employees, despite not being legally obligated to.]

They have sold our privacy as a commodity. [Seems unlikely that any company has actually sold your “privacy.” Maybe your “private information”]

They have deliberately declined to recall faulty products endangering lives in pursuit of profit. [Some bad or sleazy companies, yes. Most, no.]

They have donated large sums of money to politicians, who are responsible for regulating them. [True.]

They continue to block alternate forms of energy to keep us dependent on oil. [Well, oil and coal companies certainly aren’t eager to see safe cold fusion or mass-solar or geo-thermal commercialized anytime soon. But alternative energy corporations would be stoked to see us forgo oil. And many other companies—most, actually—couldn’t really care less what their power comes from, as long as it’s affordable.]

They continue to block generic forms of medicine that could save people’s lives or provide relief in order to protect investments that have already turned a substantial profit. [“Block?” You mean try to enforce their patents? Developing drugs is expensive. How would you like it if you spent $1 billion developing a boner pill only to have your competitor instantly reverse-engineer it and start selling it for 1/10th your price? Having at least some period of exclusivity seems perfectly reasonable.]

They have purposely covered up oil spills, accidents, faulty bookkeeping, and inactive ingredients in pursuit of profit. [Yes, some have.]

They purposefully keep people misinformed and fearful through their control of the media. [Oh, come on. Take off the tinfoil hats. People aren’t THAT stupid. And the media LOVES to trash corporations. And besides, now there’s the Internet and Twitter, so you don’t need the media anymore.]

They have accepted private contracts to murder prisoners even when presented with serious doubts about their guilt. [Sounds horrible. Need some details. Again, almost certainly not something the vast majority of companies have done.]

They continue to create weapons of mass destruction in order to receive government contracts. [Okay, but let’s rephrase that, shall we? They make weapons that governments order.]

To the people of the world,

We, the New York City General Assembly occupying Wall Street in Liberty Square, urge you to assert your power.

Exercise your right to peaceably assemble; occupy public space; create a process to address the problems we face, and generate solutions accessible to everyone.

To all communities that take action and form groups in the spirit of direct democracy, we offer support, documentation, and all of the resources at our disposal.

Join us and make your voices heard!

*These grievances are not all-inclusive.