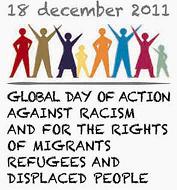 Proposes
A global day of action on December 18, 2011 against racism, for the rights, equality and dignity of migrants, refugees and displaced people

requires
for the ratification and implementation of The United Nation Convention for the rights of Migrants workers and the members of their families, the freedom of movement and the right to stay, the closure of migrants detention centers and the revocation of all the agreements and programmes concerning states’ borders which offend human rights.

Denounces
The negative consequences of neo-colonial and neo-liberal policies.

Claims
The fundamental role of migrants as political and social actors to build a universal citizenship system.
Statement of the Dakar World Social Forum – February 2011

MAKE A NETWORK, NOT ONLY WEB

Following the forums in Quito and Dakar, discussions and preparations for the global action day on 18th December proceeded with Skype meetings in July and September.

A sort of international coordination has taken shape during these meetings, with approx. ten participants from the U.S.A., Italy, El Salvador, Belgium, Spain, Ivory Coast, Colombia, Peru, the Netherlands, Mexico and Switzerland. Some representatives of other countries, such as Bangladesh, the Philippines and India for the Asian area and Burkina-Faso, Cameroon and Mali for the Northern and Sub-Saharan Africa have also been involved in the preparations, thanks to a mailing-list created after the Dakar forum.

THE ROOTS OF THE DAY OF ACTION

«For us migrants, coming from and residing in all countries of the world, time has run out. The time of limited visions, of fears, of selfish divisions is over. The time when all was accepted without saying a word – just to survive – even the alms and the inhuman exploitation, is by now gone.
It is about time of seizing control over our life, a dignified life, such as any human being deserves.
It’s time to have a global vision of the world: we know it better than anyone else, because our migratory routes have gone across the Earth. We know how to tidy up a hut and keep a cabin clean, but we also know how to handle a complex informatics network. It is time to learn and to teach : what are our rights and our responsibilities, and how we can have, at last, our rights respected – without exceptions – as much as we take our responsibilities upon ourselves.»

Forward to international events on December 18, 2011!

Many organizations in different countries are already working towards it. Each country, region, city is deciding autonomously what type of event they will hold: it could be a rally to demand legalization for millions of undocumented people around the world, an event to remember the thousands who have died at the borders or in the struggle to defend their rights, a conference about freedom of circulation around the world, or simply an anti-racist party.

We know it is difficult to coordinate events internationally, but now more than ever we are convinced that the situation demands it. States, economic powers and political structures, disconnected with the daily lives of men and women arbitrarily impose their decision through violent means. This is case of the displacement programs and of deportations. It is also the case of the problems that workers confront in their search for work and the multitude of obstacles states placed on them infringing upon their rights to migrate to the country they choose.

This is why what will unite all these events will be our decision to affirm the right to migrate or not to migrate, the right to choose where we want to live, and not to be displaced from our own territories.

This dream can become reality if we are many in the struggle and we fight together. The event of December 18 wants to be another common space to be used by all those among us who already struggle for the rights of migrants, refugees and displaced people.

We are therefore inviting all organizations whether religious or non-religious, unions, political organizations, and the civil society at large to make this international initiative a success.

A worldwide movement to struggle for migrants, refugees and displaced people is possible!

World Charter of Migrants Proclamated at Goree (Senegal) on February 4, 2011

In the process building the global action event we linked in Dakar with the World Charter of Migrants, which during the days preceeding the Forum debated and approved the final text of the Charter.

The event of December 18, 2011 was suggested to be an opportunity to let people of the world know about this important document.

Statement approved by the social movements assembly at the IV World Social Forum on migrations (Quito, 2010)

During the World Social Forum on Migrations in Quito, Ecuador, a seminar discussed the need to come up with a global action for the rights of migrants, refugees and displaced people. Likewise they discussed the most appropriate date for this event and concluded that this was December 18, the date when the United Nations adopted the “Convention for the Rights of Migrant Workers and their Families”. This date already has an international character but we now must retake it from the grassroots up and transform it into a day of struggle.

Here we include the text approved by acclamation at the final assembly in the Forum. This document also includes the list of the first group of endorsers. To read it click on the [+] sign below.

One thought on “December 18, 2011: A Day of Global Action Against Racism and for the Rights of Migrants, Refugees and Displaced People”