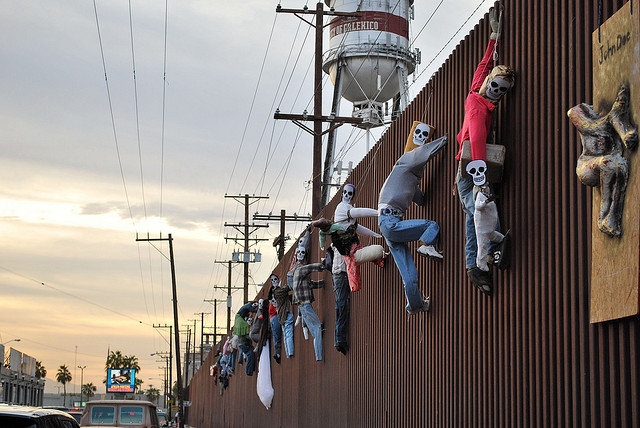 Last Thursday, the people of Mexico celebrated Dia de los Muertos, or Day of the Dead. A sacred day when the souls of the dead return to this world to visit the loved ones they left behind.

Like every Day of the Dead since 1994, the year that Operation Gatekeeper tightened border security and diverted migrants to remote and dangerous areas, human rights defenders and immigration advocates hang crosses on the border fence as a way of honoring the men, women and children who lost their lives in their pursuit of the American dream.

Last weekend, artists and activists from San Diego and Tijuana placed a large paper skull on the border fence, with the names of more than 4,000 migrants who have died while trying to cross the border illegally since Operation Gatekeeper began.

Claudia Smith from the California Rural Legal Assistance Foundation is one of those activists.

“Every year we ask ourselves how many more migrants will we have to honor next year, and every year there are hundreds more. This year there were more than 400 hundred.”

Twelve years have passed and now migrants face a new danger, because last week President Bush signed the Secure Fence Act, a law that authorizes the construction of 700 miles of additional fencing along the US-Mexico border.

For Claudia Smith, the new border fence will only result in more dead migrants.

“The strategy consists of constantly pushing migrants away from populated areas, so it’s harder for them to cross the border. So migrants will take even more terrible routes, where the possibilities of being rescued are absolutely minimal. But migrants will keep trying to cross, even if it’s under, over or around those walls.”

But for some social activists like Dolores Huerta, Co-founder of the United Farm Workers of America, the new wall will never be built, because the funds have been authorized but have not yet been approved.

Huerta added that one of the main detonators of migration is the exterior policies between the United States and Latin American countries.

With rising poverty levels in Mexico and a growing demand for inexpensive labor in the United States, migrant rights defenders like Father Luis Kendzierski, head of a mi-grant’s shelter in Tijuana, believe that building fences will not put an end undocumented immigration.

“Migration is necessary for Mexico and for the United States. So what we see is that this will not necessarily stop migration, it will only divert it to tougher routes and elevate the cost of crossing. The immigration problem cannot be solved with walls.”

Joel Montaño, a 21 year-old migrant from the southern state of Veracruz, is living proof that fences and increased border security will not keep migrants from trying to cross into the US.

“If you really have a dream and you are determined to accomplish it, it doesn’t matter if they put up ten or fifteen walls, you will succeed”

Joel will try to cross the desert into the US this Friday without the help of a guide, because he can’t afford the $1,500 dollar fee, and as he participates in the holiday celebrations, he prays that his name won’t appear in a cross or a skull in next year’s Dia de los Muertos celebration. 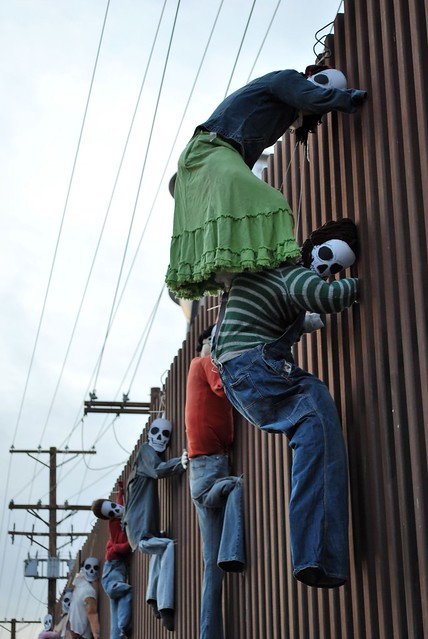 US-Mexico Border day of the dead 2 “Dia del muerto” – Urban celebration of “Dia de muertos” (day of the dead) @ the Mexico-US Border in Mexicali BC Mexico border with Calexico CA US.