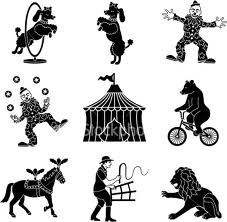 With a stairwell for a confessional and a folding table for an altar, the lobby of the DCU Center arena here, about 40 miles west of Boston, doesn’t look especially holy ― until a band of circus workers gathers for Mass.

That’s when the Rev. Jerry Hogan dons a colorful chasuble festooned with images of big tops, lions and zebras. As he administers the Eucharist, off-duty performers help sanctify the space by kneeling on the marble floor, praying and breaking spontaneously into Portuguese song. The event is no act, even if it is associated with a three-ring circus.

After months of living together on a train and performing hundreds of shows a year, these 50 Catholic circus workers and their children are a beaming bunch as they hug the priest and nuns who’ve prepared them for this day. “This gives me a way to know Jesus and to be protected,” said trapeze artist Ingrid Silva as she prepared for the sacrament.

The Circus and Traveling Show Ministries of the U.S. Conference of Catholic Bishops provides the spiritual lifeblood for about 4,500 Catholics who work in North America’s 41 traveling circuses, as well as thousands more who work in carnivals, rodeos and auto racing.

Since the workers’ lives are too transient to allow many of them to get to church, the church instead comes to them. Now the ministry is being reformed to depend less on religious professionals and more on laypeople.

For years, the Ringling Bros. and Barnum & Bailey Circus employed nuns as teachers for circus workers’ children; they led religious programs for adults on their own time. Circus employment has now ended for Sisters Dorothy Fabritze and Bernard Overkamp, who are leaving to travel with other circuses, staying a few weeks to train workers to serve as religious educators and relying on donations to sustain their ministry.

“We’ve had others come forward, in this circus and other circuses by the grace of God, and say, ‘We want to do what the sisters are doing,’” Fabritze said. “We’ll help them organize classes and find out what people are asking for.”

As the ministry gets revamped, circus workers are pausing to give thanks and consider the importance of church outreach. Call it the high-wire effect: something bad could happen any night, and they want to be right with God if it does.

Consider Paulo Cesar, a 27-year-old Brazilian dwarf who rides a motorcycle in a death-defying loop-de-loop. A few hours before showtime, he availed himself of four sacraments ― confession, baptism, confirmation and first Communion ― as he grinned widely. “Anything can happen on the motorcycle or the trampoline,” he said. “But my job is good because I have Jesus in my heart.”

For some, the ministry also helps build much-needed virtues. Hungarian national Sandor Eke, 35, has been on the road as a fire-juggling clown for 14 years. He’s needed to develop patience, he said, for living out of a 6-by-10-foot room in a train car. He married a fellow circus performer, but after they divorced, he had to work every night with his ex-wife until she left the circus two years later.

“Here, in a train, you have to work with (your ex-wife), you have to dance with her,” Eke said. “It’s a lot more difficult than in any other relationship … The sisters teach us to read the Bible, to analyze it, to ask what would Jesus do. It just helps me to calm down.”

The Circus and Traveling Show Ministries have evolved with the industry since taking root in 1928, when a monsignor started blessing the train. Soon after, Boston priest Ed Sullivan began officiating at weddings for circus workers. Hogan, who’s been fascinated with the circus ever since he went backstage as a child, has been president and chaplain since 1993.

Today’s circus is an international display of talent, with many performers hailing from Latin America and Eastern Europe. “I smile in a lot of languages,” Hogan said. But behind the smile is admiration for the sacrifices circus workers make in order to give audiences a couple of hours of enjoyment.

“When they’re performing, the arena is a sacred place,” Hogan said. “It’s their temple. It’s where people come to be entertained and forget about what’s going on in their life … My job is to help enhance their skills with a support system.”

As part of his traveling ministry, Hogan takes brief breaks from his full-time priestly duties at St. Michael parish in North Andover, MA. He travels on a shoestring budget, often staying with priests or monks. When the circus comes to the Northeast, he invites workers to his parish, where some park their circus vehicles for several days. If they need a mechanic, a dentist or new eyeglasses, he steers them to merchants who won’t take advantage.

“If their car breaks down, a guy could be shady and say, ‘Oh, you’re with the circus?’ and charge them an extra $200,” Hogan says. “You’re always dealing with these subtle prejudices. So they say, ‘Father Jerry, can you get me a mechanic?’ And I do.