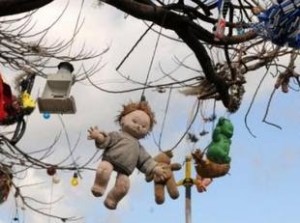 To most Americans, Christmas wouldn’t be Christmas without at least a few of these traditions and celebrations.

But as a religion with more than 2.2 billion adherents, something as simple as a celebration of the birth of Jesus Christ has taken on enormously different shapes and styles across the globe. In many places, the most important Christmas celebrations don’t even take place on December 25.

From the colorful Simbang Gabi Mass celebrations of Filipino Catholics and the dancing Koledari carolers of Bulgaria and Macedonia to Mexican Posadas and the elaborate Ganna processions of Ethiopia, here’s a sampling of the spiritual and cultural dimensions of one of the biggest holidays in the world. 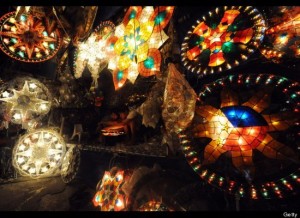 Over the nine nights leading up to Christmas, Filipinos attend Simbang Gabi, a festive and colorful series of Masses that includes Tagalog hymns, processions with bamboo star lanterns and Filipino foods.

The tradition, which translates to “night worship,” goes back to the 16th century, when Spanish colonization resulted in much of the nation converting to Catholicism. Much of the population in the colony worked early in the morning as fisherman or woke up early to farm, making pre-dawn the best time for Mass.

Simbang Gabi Mass has the same liturgy as other Roman Catholic Masses, but it adds emphasis on Tagalog hymns and the story of Jesus’ birth. In the United States, it has become an evening event in order to not conflict with work schedules.

Oftentimes, Filipinos make a panata, or vow, to attend every Simbang Gabi Mass, as tradition says that a wish will be granted for those that reach the goal.

The photo above shows star-shaped Christmas lanterns, known as parols. Parols are patterned after the Star of Bethlehem, which guided the three kings to baby Jesus in a manger, and are made from bamboo covered with paper. They are displayed in houses, offices, buildings and streets. They represent the victory of light over darkness.

In Bulgaria, Christmas is celebrated on December 25 and includes a popular tradition in which carolers (koledari) visit homes beginning late on the night of Christmas Eve. The carolers, typically boys, each carry a stick called a gega, and wish their neighbors and relatives health, wealth and happiness. Each group of carolers is usually led by an older man called a stanenik.

A similar tradition takes place in Macedonia, but it happens on the morning of January 6, which corresponds to Christmas Eve on the older Julian calendar that is often used by Orthodox churches. After the carolers sing, they are given money, fruit and candy as gifts by the people to whom they sang.

Mexico, Guatemala and parts of the United States: Posadas 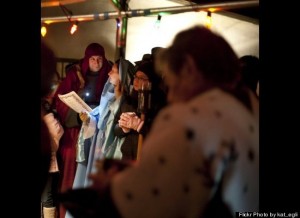 Christmas posadas are most popular in Mexico, Guatemala and parts of the United States with significant Mexican and Guatemalan populations. Children and adults dress up as Mary and Joseph in small processions that are held during the nine days before Christmas Eve. The posadas are supposed to be a reenactment of Joseph and Mary’s — “The Pilgrims”– search for lodging on their way to Bethlehem.

The tradition includes a party at a different neighborhood home each night. “The Pilgrims” sing a song asking for shelter, with the hosts replying in song before opening the door to offer hot punch, fried rosette cookies known as buñuelos, steaming tamales and other holiday foods. The party ends with the rupturing of a piñata in the shape of the Christmas star.

Christmas Eve, according to the Orthodox calendar, falls on January 6 in Ethiopia. On that night, priests lead processions throughout cities and villages in which they carry elaborately decorated umbrellas and wear their best traditional clothing. The processions end at churches for Mass. On the morning of Christmas, which is called Ganna, presents are exchanged, people feast and some also take part in sports.

One of the most popular holiday celebrations in Ethipia is Timket, which falls on January 19 and observes Jesus’ baptism in the Jordan River. The video below shows a Timket celebration from 2003 in Addis Ababa, Ethiopia. 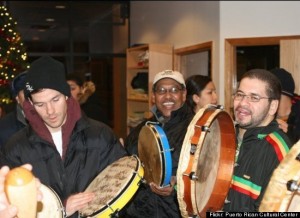 The parranda is a Puerto Rican tradition where groups of friends and even strangers gather toasaltar or overtake friends’ homes with holiday merriment. Some parranderos play musical instruments such as guitars, tamboriles and maracas, while others dance. Everyone sings. The group gets bigger and bigger as they go from home to home.

Parrandas are spontaneous, so every household must be prepared all throughout the holidays and at all hours to receive guests. Rum and traditional food, such as arroz con gandules (rice and pigeon peas), pernil (pork shoulder) and pasteles (similar to tamales, but made from plantains or yuca), are often available.

In Puerto Rico and in many Latin American countries, Three Kings Day is also significant. The holiday commemorates the journey of the three kings to bring gifts to Baby Jesus and falls on January 6. In many cities and towns, colorful parades will mark day, which is also known as Epiphany. 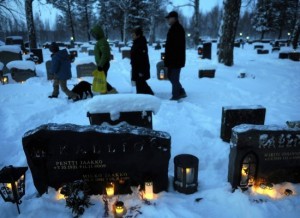 On Christmas Eve, Finns traditionally place candles on the graves of relatives.

The tradition has its roots in pre-Christian times, when ancient Finns believed that the Winter Solstice — which is around the same time as Christmas — brought out the spirits of the dead. Food would be left out on tables and families would sleep on the floor in order to let the dead have a good meal and a place to rest when they visited. The candle tradition remains, and it became especially popular after the 1920s as Finns began to put candles on the graves of dead soldiers. Today, Christmas Eve is still a significant night for honoring those who have died in war. The practice of putting candles by graves around Christmas is also common in Estonia. 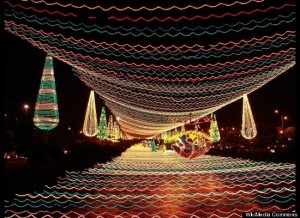 The novena is a series of prayers that is said for nine consecutive days in anticipation of the birth of Jesus, beginning on December 16. The prayers are petitions, but are also offerings of thanks. Families typically gather around nativity scenes and pray together. Novenas can be held in different homes each night. After the prayer, people play instruments and sing villancicos or carols.

Another common Christmas tradition in Colombia is the Dia de las Velitas or Day of the Candles. Almost any outdoor area that can be covered with candles, from streets to porches and driveways, will be lit up to in anticipation of the Feast of the Immaculate Conception, which is observed December 8. The feast day is very significant in Colombia, which is heavily Catholic.

The photo above shows a Dia de las Venitas light display along a river Medellin, Colombia.

Christmas Eve is the most important Christmas celebration day in Colombia, as families pray the last novena and gather late at night to open presents as the clock hits midnight. 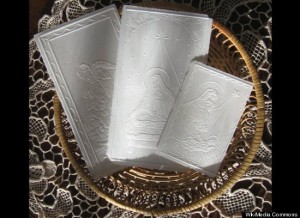 Christmas Eve starts with fasting and ends with feasting in largely Roman Catholic Poland. The Christmas meal, wigilia, is one of the most important meals of the year. A significant part of it happens when families and close friends share in eating a piece of Christmas wafer, which is typically stamped with a nativity scene or another Christmas symbol and has been blessed by the local bishop. 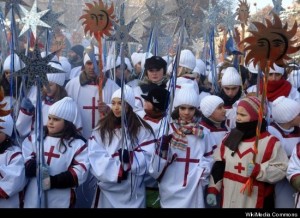 In the Eastern European nation of Georgia, Christmas is celebrated on January 7, according to the Orthodox calendar. One of the most traditional observations is the alilo, where mostly kids dress in special costumes and gather for mass walks on the streets and sing carols.

In Georgia, Santa Claus is known as tovlis papa, which means “Grandfather snow.” He usually wears a long white beard with a choka, a traditional Georgian outfit, and a nabadi, which is a fur cloak.

In the photo above, kids join in an alilo march.