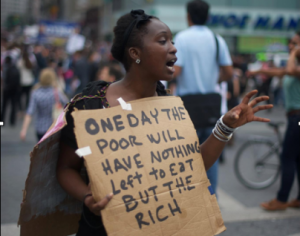 The “Occupy Wall Street” protests are gaining momentum, having spread from a small park in New York to marches to other cities across the country.

So far, the protests seem fueled by a collective sense that things in our economy are not fair or right.  But the protesters have not done a good job of focusing their complaints—and thus have been skewered as malcontents who don’t know what they stand for or want.

(An early list of “grievances” included some legitimate beefs, but was otherwise just a vague attack on “corporations.” Given that these are the same corporations that employ more than 100 million Americans and make the products we all use every day, this broadside did not resonate with most Americans).

So, what are the protesters so upset about, really?

Do they have legitimate gripes?

To answer the latter question first, yes, they have very legitimate gripes.