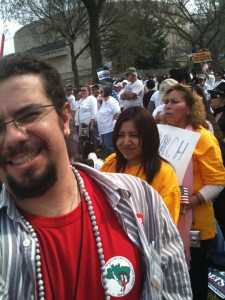 Friends, please do get involved if you can.

In case you have not seen the news, there is an attempt to enact anti-immigrant legislation similar to the Arizona SB-1070 here in Kentucky. Moreover there is also legislation in the making to limit access to services even to legal immigrants and refugees. Our action is necessary. The Kentucky Catholic Conference and the Kentucky Council of Churches along with other entities are coordinating efforts to stop this from happening.

Because SB 6 is so closely modeled on Arizona – or even worse! –  I am attaching documents prepared by the bishops of Arizona in response to the legislation there. I humbly suggest that you begin using materials from these documents to write a short letter to your state senator and make clear you oppose the bill and you are asking him/her to vote against it. Please contact as many people as you can who will make calls to the 1 800 372 7181 number and leave a simple message for their Senators: oppose SB 6.

This Saturday several grassroots and religious organizations will meet at the Americana Community Center to coordinate efforts. You are welcome to join us at 2:00 PM.

Thank you to each one of you for considering this request. Your prayers are important and needed, but your action is needed as well. God’s people are in jeopardy of losing civil rights and their marginalization will be legalized if we dont’ stop this.

If you need further information or have questions please don’t hesitate to contact me.

Ron Russell and I made some calls and decided to convene a meeting for this Saturday, Jan 8 at 2:00 p.m. at the Americana Community Center (see address below) in order to defeat Senate Bill 6 being proposed in Frankfort…and make it known just how determined, unified and awake we are, despite all the holiday cheer (which we also have in abundance).

So all lovers of justice and humanity consider coming out.  We will keep you in the loop if you cannot make this first organizing meeting… as a call has already gone out to telephone the legislative switchboard in Frankfort to weigh in immediately.  That is:  Please contact as many people as you can who will make calls to the 1 800 372 7181 number and leave a simple message for their Senators and House reps: oppose SB 6 or the version likely to pass on to the House after the vote in the Senate.

Stephen Bartlett
Co-Convener of the KY May Day Coalition

A call to organize against the Arizona 1070 copy-cat, anti-immigrant legislation in the KY legislature:

When we met before our rally in the fall, we discussed the possibility of having to fight anti-immigrant legislation in the upcoming legislative session.  Unfortunately, our concerns have come to pass.  So lets get our collective ideas and organizational skills together for a meeting this Saturday, January 8, 2010, at 2:00 pm at Americana Community Center (where we have had our previous meetings).  We have a lot of work to do to make sure this legislation is not passed by the state House (passage by the state Senate seems assured).  Lets think of all potential allies that can broaden the opposition to this misguided, anti-immigrant, racist, Arizona 1070-mimicking legislation.  There are MANY reasons why it is bad for our state, enough to build a VERY BROAD coalition to stop it in its tracks.  It is clearly a political ploy to spread hatred and division for political gain by the authors of the legislation.  THIS BILL SIMPLY CANNOT BE ALLOWED TO PASS.  And we will only have a short period of time to organize as the legislative session is only a few weeks long.

Also, there will likely be a need to oppose other legislation, such as the education proposal making it unlawful for undocumented students to attend college in KY.  Send me a couple of agenda items you think we should discuss.  Some ideas so far are a rally (maybe in the rotunda of the
Capital?) and a lobbying session, similar to what Kentuckians for the Commonwealth have done and what the ACLU did a few years ago to stop some anti-immigrant legislation of a few years ago.  Google Utah Compact for reports on the compact and its statement.

Finally, once we stop this legislation, lets also think about proposing a broad based, anti-Arizona legislation, pro-immigration reform pact that organizations can sign onto, similar to the Utah Compact, which opposed Arizona 1070-type legislation in their legislature.  The Utah Compact was developed by a coalition of religious and business groups.  The statement has some drawbacks, but the overall message is positive.

Spread the word, send to list serves you have had contact with, bring friends to the meeting, and most importantly, see you this Saturday!

One thought on “Call to Action! Call to Organize to Stop Anti Immigration bills in KY!”