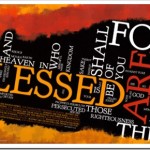 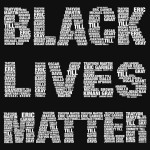 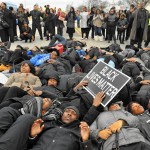 Baltimore, MD-12/14/14 – More than 500 protesters marched from Empowerment Temple Church on Primrose Avenue north on Reisterstown Road to Reisterstown Road Plaza for “Black Lives Matter Sunday.” On Reisterstown Road, near the entrance to the shopping center, the protesters formed a circle and many laid down to stage a die-in to show solidarity with Michael Brown. Brown, a 18-year old black man, was fatally shot by a white police officer in Ferguson, Missouri. The officer was not indicted, sparking nationwide protests, including this one. Amy Davis / Baltimore Sun – #7820

When Jesus saw black people being killed on the streets of United States, Brazil and many other countries, he laid down with them on the streets, and all of the Christians and people of every other faith across the world came to him and laid down on the streets with him. Then, Jesus began speaking and taught them saying:

Blessed are black people and the poor, for theirs is the kingdom of God, on earth as in heaven. Tell them time and again that justice is coming! Blessed are you!

Blessed are those who mourn the black lives, for they will be comforted. Blessed are you!

Blessed are the meek, for they are strong as hell and heaven together, and they will inherit an earth that is filled with justice and finally will be peaceful. Blessed are you!

Blessed are those who hunger and thirst for racial righteousness, for they will be dully filled. Blessed are you!

Blessed are the merciful with those who are in weaker conditions, those who are hungry, those without jobs, those afraid of losing their jobs, those afraid of speaking up, those as weak as the earth, so abused and so weak right now, for they will continue to believe that the social-economic Darwinism is not the response, and they receive mercy and care when they also become weak. Blessed are you!

Blessed are the pure in heart, for they still believe, even if naively, in an ethical world, a world of justice, a world where people are treated without merits and with fairness, and everybody have the same rights and opportunities, for they will indeed see God in the cities, among the campesinos, in neighborhoods, in schools, in courts, in congress, in the making of the laws and everywhere. Blessed are you!

Blessed are those who are persecuted for racial sexual economical righteousness’ sake, those walking on the streets demanding justice, those protesting for theirs rights, those doing civil disobedience, those confronting laws that benefits the white-patriarchal-heterosexuals and the rich, for theirs will be for sure, the kingdom-of-immense-diversity-complexities heaven right here, on earth. Blessed are you!

Blessed are you when people in power and those who support the powerful in these racialized, unjust, class struggle world, revile you and persecute you and put you in jail, and take away your money, and make laws for big corporations and support colonization, and maintain systems of oppression, and utter all kinds of evil against you falsely on my account. Blessed are you!

Rejoice and be glad, for your reward is not yours but for the world and especially for the communities/people that suffer. So don’t give up! For in the same way they persecuted the prophets who were before you. And they will continue to do it after you. Yes, Blessed are you!

Then Jesus stood up and said: now go and preach this good news to the world! I will be in tour midst, disguised by who I truly am: poor, marginalized, queer, beaten up, killed on the streets for being black.