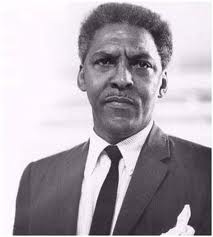 Rustin’s name does not ring bells for most Americans. Yet the impact that this life-long agitator for justice had on America was profound.

Rustin was more responsible than anyone for making Gandhi’s philosophy a central feature of the civil rights movement. In the 1940s he and others experimented with nonviolent direct action as a means of challenging racial injustice, both in the North and the South. When a bus boycott began in Montgomery, Ala. in 1955, Rustin was perhaps the most experienced Gandhian activist in the U.S. He brought his knowledge to Alabama, became mentor to the Reverend Martin Luther King, Jr., and strategized Dr. King’s emergence as a national leader.

Later, when civil rights leaders realized that the time was right for a national march on Washington, who better to organize it than this master of protest? With just seven weeks lead time, Rustin coordinated an effort that brought 200,000 people to the nation’s capital, where they assembled peaceably and heard what became one of the iconic speeches of the 20th century. The press referred to Rustin as “Mr. March on Washington.”

Rustin’s reach extended beyond the fight for racial justice. A Quaker and a pacifist for half a century, he played a key role in mobilizing popular protest against the nuclear arms race. At the height of the Cold War, when sirens blared, all Americans were supposed to duck for cover. Rustin and a few other comrades said, “This is insane,” and they sat instead in City Hall Park in New York. Indicted and found guilty, they did it again, and again, until many thousands of Americans followed their lead. Rustin organized protests against nuclear weapons in the Nevada desert, the south Pacific, and the Sahara. Soon, the nuclear powers abandoned atmospheric testing.

Rustin’s list of achievements is long. So why don’t most Americans know about him? Rustin had three strikes against him. In the 1930s he had been a Communist, and in J. Edgar Hoover’s America, that meant you were always a danger to the nation. In the 1940s he had been what some might call a “draft dodger.” He served two years in federal prison rather than fight in World War II, a stance that did not go down well with American Legions and other patriots during the Cold War. And, through all these decades, an era I describe to my students as “the worst time to be queer,” he was a gay man who refused to play it straight. At a time when every state had sodomy laws, when the federal government banned the employment of all homosexuals, and when police across America felt authorized to walk into gay bars and arrest everyone who was there, Rustin’s sexuality brought him no end of trouble. Two weeks before the March on Washington, South Carolina’s segregationist Senator, Strom Thurmond, read into the Congressional Record evidence of Rustin’s “sex perversion.”

Rustin’s survival, and the survival of the movements he championed, depended on his staying out of the limelight and working in the background. But, during this centennial year, let’s not keep him in the background.

In many ways, there could not be a better time to reflect on what his life can teach us. In this last decade, our national leaders have assured us that the surest route to safety and security and freedom and justice is through war. Mass incarceration and restrictive voter registration laws are undoing many of the gains of the civil rights movement. The gap between the rich and the rest is greater than ever. Our national government seems to exist only to serve the wealthy. Every bit of good that government has done in the last century is being carefully and methodically dismantled.