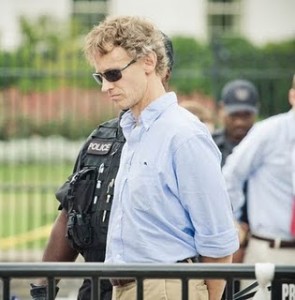 “You Are Now All Under Arrest… No one may leave the secured area.”

With that, U.S. Park Police Lt. Marshall snapped off the megaphone, and walked back to the armored SWAT truck.

137 of us stood or sat completely still, in five ranks, with our backs to the White House’s iron pickets.  The time was 11:31, Thursday morning.  Ministers, retirees, college students, programmers, and farmers among many others awaiting search, handcuffing, and the paddy wagons bound for Anacostia and processing.  The first to go was a wheelchair-restricted woman named Lolly, who was taken away to thunderous applause of all of us awaiting our own turn, and of the hundreds of onlookers across the avenue in Lafayette Park. 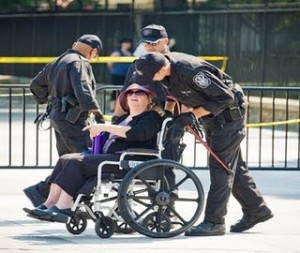 Next to me stood my brother, Christopher Elwood, a Presbyterian minister.  For the next three hours, our steadily diminishing band hoarsely belted out familiar tunes, reworked on the spot with lyrics to urge President Obama not to approve the Tar Sands pipeline from Canada to the Gulf.

The tar sands have been called the world’s filthiest fuel.  NASA’s lead scientist has warned that if the pipeline is built and the tar sands are mined, then for the global climate, “it’s game over.”
We were at the White House for many different reasons.  Most of us were older with kids, and nearly half could have been grandparents.  Most said they were there for them: the kids and grandchildren.  (For me, it was a little beauty named Clara Mae.)

There were indigenous people who testified to skyrocketing cancer and illness rates in the tar sands region.  They told of hunting elk and moose which were covered with sores from toxic waste.  They told us of the utter destruction of their lands and waterways.

There were Midwesterners who rely on the Oglala Aquifer, over which the proposed pipeline will carry the toxic diluted bitumen.  They recounted the dozens of spills which have already plagued a smaller pipeline carrying tar sands fuel.  And they told of the Republican governor of Nebraska who has just come out against the tar sands for similar reasons.

But all of us are indigenous to the earth that God has made for us.  And some of us were keenly aware that we are only tenants, and that this planet belongs to Him.  Even more, the Christians among us affirm that the earth is not principally our inheritance, but Christ’s.  We stood at the White House gates out of allegiance to the Savior to whom all things belong.

One placard captured a reality seen by all: “There is no Planet B.”
It took about three hours.  One by one, we were led away.  132 was Ted, a father from Portland; 133 was Tony, a recent college grad from Colorado.  Then the officer pointed at me.  As the plastic cuffs were tightened behind my back, I heard a few hands clapping, and my brother’s voice:  “Well done, John.”
I looked back, and there stood Chris, solemn, smiling.  Two young men stood beside him: Sam, a college sophomore from Ohio; and Jeff, a systems programmer from DC. The final three to be taken.
As they led us to the wagon, the crowd behind the police barricade sang: “It’s the hammer of justice, it’s the bell of freedom, it’s the song about the love between my brothers and my sisters….”
Thanks for reading, and may God bless you.
J. Elwood
Resource: http://clotheslinereport.blogspot.com/
By Cláudio Carvalhaes | September 3, 2011 | BLOG | No Comments |