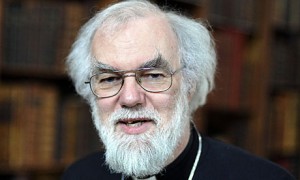 Rowan Williams says bankers, politicians and editors should be reminded of their power to change things

Bankers, politicians and newspaper editors should be legally required to spend a couple of hours a year working with the poor and needy to remind themselves of the purpose of power and wealth, the Archbishop of Canterbury has suggested.

He made the comments on Maundy Thursday, the Christian day celebrating Jesus washing the feet of his disciples, and the day the British monarch offers “alms”, in the form of coins, to elderly people.

In a contribution to BBC Radio 4’s Thought for the Day, Rowan Williamssaid: “What about having a new law that made all cabinet members and leaders of political parties, editors of national papers and the hundred most successful financiers in the UK spend a couple of hours every year serving dinners in a primary school on a council estate? Or cleaning bathrooms in a residential home? Walking around the streets … at night as a pastor, ready to pick up and absorb something of the chaos and human mess you’ll find?”

There was no doubt some public figures were charitable and humble in private, the archbishop said, but doing such deeds in public could have a greater impact. “Maybe having to do it, to do it in public and not to be able to make any sort of capital out of it because they had no choice? It might do two things: remind our leaders of what the needs really are at grassroots level, so that those needs can never again be just remote statistics; and remind the rest of us what politics and government are really for.”

Read the rest of the article at: http://www.guardian.co.uk/uk/2011/apr/21/archbishop-canterbury-law-rich-poor