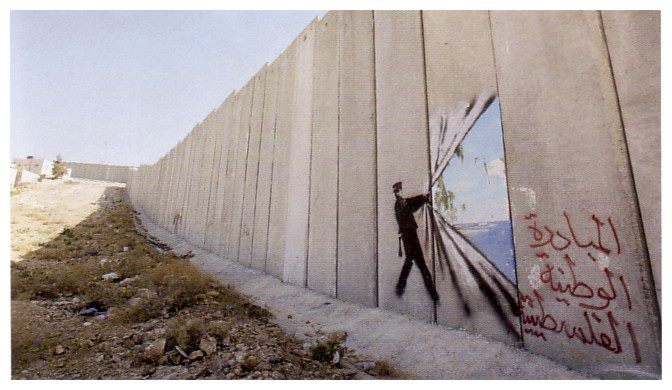 “The Campaign’s aim to tear down the Wall is aligned with the Palestinian desire for liberation—for those of us inside and in exile, the young and old, those who have died, and those yet to be born. We are part of the struggle to protect our birthright to not only exist, but to reclaim our history and our ancestral land, and ensure a just future for the Palestinian people. Our vision is built upon our strength of will and steadfastness, which, like the roots of our ancient olive trees, run deep within our struggle and continue to feed our resistance. We stand firmly in the belief that these basic principles of our cause must no longer be betrayed or compromised. We will not relinquish our right to our lands, and we will not stand by while a new Nakba descends upon our people.

The Wall is an integral part of the Zionist project to remove Palestinians from Palestine. We strongly believe that it can be torn down, and with it, the racist ambitions of Zionism. We know that our struggle will not be won tomorrow, and we are not in a hurry. Our road ahead is long, and so we must build a strong foundation of resistance by staying honest and true to our principles. Generation after generation, we have to provide the youth with the lessons, guidance and trust they need and deserve so that they can continue to lead our struggle until one day we will be free and able to return to our homes.

The Palestinian struggle is, at its core, a basic human instinct and drive for self-determination. It is a fight against expulsion and subjugation under Occupation. We ask the world to recognize this and support our path towards liberation without imposing conditions upon this aim. “

Since its inception in 2002 the Palestinian Grassroots Anti-Apartheid Wall Campaign (or Stop the Wall) has been the main national grassroots body mobilizing and organizing the collective efforts against the Apartheid Wall. It is based on the efforts of popular committees in the villages affected by the Wall where people can meet, organize, strategize and mobilize. A coordination mechanism in each West Bank district allows regional coordination as well as West Bank wide coordination. The Stop the Wall coordination office works to ensure national networking, research and international outreach.

The immediate goals of the Stop the Wall campaign have been sanctioned by the decision of the International Court of Justice on the legal consequences of the construction of the Wall (July 9 2004) and are:

Stop the Wall considers the Wall as an integral project of Israel’s occupation, colonialism and apartheid and hence understands the struggle against the Wall as part of the overall effort of the Palestinian people to achieve self-determination, equality and the return of the refugees.

Stop the Wall believes that at this stage it has to be a national priority to reinforce popular resistance – the united struggle by a people that are educated, critical and actively mobilized to contribute to the overall goals of the national body. After the failure of the “peace process” and years of ‘bureaucratization’ of the Palestinian struggle during the Oslo period, Stop the Wall works to bring back protagonism to the grassroots fostering the participation of the farmers, the workers, the youth and the women in the political decision making and popular action. Stop the Wall calls for accountability, participation and transparency in the decision making and implementation of Palestinian politics. The decisions that are to be made regard the most fundamental questions of our national and human rights and can’t be left in the hands of a small elite.

Stop the Wall acts as well at international level because the Palestinian question has been created by the colonial powers and until to date the Israeli project of ethnic cleansing and apartheid is sustainable only due to continued international support. Our call for justice and human rights connects us with the majority of the people around the globe. We count on their support to develop effective pressure on institutions, corporations and governments to hold Israel accountable and stop international support to Israeli occupation, colonialism and apartheid.

Stop the Wall on the Ground

Popular resistance action
Stop the Wall is formed by and expression of the popular committees against the Wall and the settlements. We organizes meetings in affected communities and supports the efforts of the committees. We facilitates community activities against the Wall and coordinate popular resistance action, demonstrations and protests at national level.

NGO and National Mobilization
Stop the Wall lobbies for its 12 member organizations and other partners to work together in creating and promoting policies against the Apartheid Wall, ensuring that all Palestinian institutions are engaged in the same goals within a unified national framework. We further encourage organizations to support and respond to people’s needs for resisting colonization of their lands and not to engage in projects that may aid or abet the situation created by the Apartheid Wall.

Information and awareness raising
From the inception Stop the Wall has placed substantial energy into information collection and dissemination. Our publications (factsheets, powerpoint presentations, photo exhibits, newsletters, briefings and books) document the destruction of Palestinian communities and are tools of mobilization and advocacy which contribute to debates around resistance to the Apartheid Wall and Israeli occupation.
They are available through our internet outlets.

National networking
Stop the Wall acts as a platform for progressive and democratic forces to come together and develop joint action. We join common efforts as a key mobilizing force during national events such as Nakba Day or Land Day. Stop the Wall forms as well part of a number of Palestinian coalitions, such as: the Palestinian BDS National Committee (BNC), the Civic Coalition for the Protection of Palestinian Rights in Jerusalem, the National Committee for the Commemoration of the Nakba.

Support for the Palestinian youth movement
Since 2006, Stop the Wall has been working on education and mobilization of Palestinian youth encouraging the construction of independent decision making mechanisms and youth leadership. Today, we support where necessary the consolidation and efforts of the Herak Shebabi, the Independent Palestinian Youth Movement. The Herak Shebabi has been formed inspired by the Arab Spring and has presented itself on the Palestinian agenda for the first time mobilizing in different cities on March 15. Since then it is part of the popular resistance action.

Targeting public opinion
Stop the Wall raises awareness about the effects of the Wall and the settlements, their illegality and role within the overall Israeli project of expulsion and ghettoization of the Palestinian people. We underline the obligation of the international community not to recognize and not to render any aid and assistance to Israeli violations of Palestinian rights and international law.

Boycott, Divestment and Sanctions (BDS)
Stop the Wall has been working since the beginning towards the Palestinian Unified Call for BDS, issued by over 170 Palestinian organizations on July 9 2005, exactly one year after the decision of the International Court of Justice on the legal consequences of the Wall. We have been a key player in the formation of the Palestinian BDS National Committee (BNC) and are now in the BNC’s secretariat. Stop the Wall contributes significantly at national and international level to the BNC’s efforts. In particular we focus our efforts on:

The urgency for an end to military relations with Israel and the defunding of its military and homeland security complex is evident to each of the activists struggling on the ground against the Wall and the settlements and facing Israeli military repression. In memory of the martyrs of the popular resistance, we ask the world to urgently act upon the Palestinian call for a mandatory, comprehensive military embargo issued on July 9 2011 by the BNC.

Stop the Wall calls for divestments and boycotts of this Israeli company that plays a key role in the construction of the Wall and provides the drones used in “targeted assassinations”, the 2006 war against Lebanon and the attack on Gaza in 2008/9. Over 13 financial institutions have already excluded the company from their portfolios.

The two French multinational are involved in the construction and maintenance of settler infrastructure in Jerusalem and the West Bank. A global campaign carried on by many organizations and networks has cost Veolia already over 10 billion euros in non-signed contracts.

Stop the Wall that solidarity is truly global only if it integrates the global south. We believe in the importance of building common struggles against colonialism, racism and exploitation. Furthermore, the emerging markets in the south of vital importance for the economic sustainability of Israeli apartheid and the active participation of the global south in the BDS movement is therefore crucial.

Israel has escalated repression against HRDs and Human Rights organizations, particularly against those involved in popular resistance against the Wall and the settlements in West Bank and in the promotion of the global BDS movement. These activists, committees and organizations need better protection so that popular resistance is not drowned in brutal repression. Our research shows that arrests and violence inflicted on individuals is not accidental but follows an established pattern. Killings and injuries are inflicted in systematic waves. Some villages are regularly raided by Israeli soldiers. Youth and children are arrested with the aim of extorting confessions about prominent community leaders advocating against the Wall. Activists in general, and youth in particular, are continuously intimidated and threatened. At the same time, the ad hoc HRDs campaign developed by Stop the Wall during 2009/10 has already created awareness about the need for protection and punctual successes in defense of these activists have been achieved through visibilityand international pressure. We need to continue to mount pressure to stop Israel from its brutal clamp down on popular resistance.