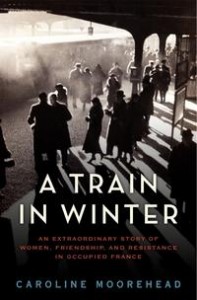 ‘You have to understand, there came a moment when our own deaths were no more important to us than the deaths of our friends’

The Nazis marched into Paris in the early hours of June 14, 1940, leaving the French shocked at how quickly their country had fallen. Most of the populace watched and waited as swastikas went up on Parisian boulevards — but not everyone.

Journalist Caroline Moorehead’s latest book, A Train in Winter: An Extraordinary Story of Women, Friendship, and Resistance in Occupied France, chronicles what happened to 230 women from all over the country who did not accept the occupation quietly.

The women — couriers, printers, clandestine radio operators — were rounded up in the first major French police operations against the Resistance. They ended up in the Romainville prison on the outskirts of Paris.

“They started coming together by the late spring of 1942, and quite soon, these women began to form friendships,” Moorehead tells weekends on All Things Considered guest host Jacki Lyden. “They were in dormitories, they shared their food, they taught each other things.”

That bond would keep many of them alive. In January 1943, the women were loaded onto cattle cars and sent east to Auschwitz.

“When they got there, it was quickly plain that some … would not survive at all,” Moorehead says. Of the 230 women, only 49 returned at the end of the war. The ghastly conditions at Auschwitz were heartbreaking for the French women, Moorehead says, but that only strengthened their determination to get each other through.

“One of the most touching things one of them said to me was, ‘You have to understand, there came a moment when our own deaths were no more important to us than the deaths of our friends,'” Moorehead says.

Life proved difficult for most of the 49 who returned. Their health — both mental and physical — had been broken in the camps, she says, and they often felt as if there was no place for them in a recovering France.

Moorehead tracked down four survivors — all in their 80s and 90s — who were well enough to describe what they had been through. “They were extremely friendly and warm, and they were extremely keen to tell their stories,” she says.

“One of the problems for these women it when they got back — it was not until the summer of 1945, when France had been liberated for a year — and nobody really wanted to hear their stories,” Moorehead says. Charles de Gaulle had promised that the country would be swift to punish traitors and collaborators — but then, France would move on.

“I had the feeling when I went to see them,” she says, “that they were longing to tell their whole story from beginning to end, to somebody who really, really wanted to listen.” [Copyright 2011 National Public Radio]