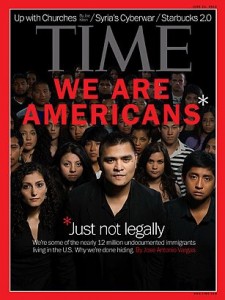 Today we celebrate a partial  justice for 1 million immigrant kids in this country. The cover of Time magazine is clear: *Not just legally,* which clearly demonstrates that they/us are not fully welcomed yet. It will enable them to build United States while not giving them the full benefits. This news for me is like looking at a half full cup of water. If we say: “they were about to be deported” my response is a full blow gloria & alleluia! But if we see it as not giving them full conditions of citizenship and exploring their work without giving them what they really need and deserve,  my response changes!  It was a timid action but at least an action that will help many people. Not fully… When I read it, I wanted to jump and say out loud ALLELUIA AMEN! But I stop half way to say a half ALLEluia and a half-eventful AMen for this action.  While celebrating it joyfully, we must know that there is more to do brothers and sisters, way  more to do…

Read below some responses celebrating the news.

SIGN the Evangelical Statement of Principles for Immigration Reform!

Read from few sources about this piece of news:
From Sojourners

We have some great news to share on our work for immigration reform!

Today the Obama administration announced that many young immigrants who were brought to the U.S. as children will be eligible for work permits — allowing them to come out of the shadows of looming deportation.

In response to the announcement, Jim Wallis said:

“The announcement from the White House today is very good news for nearly 1 million young people who have a dream of staying in the country where they have lived most of their lives. Instead of being placed in the deportation pipeline, they will receive work permits, enabling them to contribute to the nation and help build America’s future.”

This week a very broad and deep group of evangelical leaders called on the political leaders of both parties to fix the U.S.’s broken immigration system and protect “the stranger” whom Christ calls us to defend (Matthew 25:35). We believe our faithful witness, alongside the courage and perseverance of thousands of documented and undocumented youth, helped made today’s announcement a reality.

We affirm today’s good news, which gives hope and a future for young immigrants who are an important part of both the church and this country. With your support, Sojourners has worked for a more just, humane immigration system for the last six years, and this announcement is a victory for all of us.

This is an important step, but only a beginning toward comprehensive reform of an utterly broken immigration system. Let us continue alongside our immigrant brothers and sisters in the struggle for justice.

The entire team at Sojourners

Inside the World of the ‘Illegal’ Immigrant

Since revealing my status as an undocumented immigrant, hundreds of others have come forward to share their own stories. What they have to say will surprise you

We Welcome Promise to Stop the Deportation of (Some) Young Immigrants

Safety and Security for All Immigrants Still a Dream

We welcome President Obama’s decision to stop the deportations of over a million immigrant youth who may be eligible under terms described today. We hope this will be a first step towards ending the punishment of all undocumented immigrants and the separation of families.

We congratulate the tens of thousands of youths, their families, friends and allies who have fought for over a decade for relief from deportation, initially through the proposal of the “DREAM Act” and more recently with calls for an executive order by President Obama. Without a doubt, the very visible actions of undocumented youth and students in recent years “coming out” as undocumented, and leading nationwide actions and mobilizations, has been critical to this evolution of policy. Only yesterday, the TIME magazine cover story focused on young undocumented immigrants: “We are Americans – Just not legally.”

Not lost is the fact that Obama’s announcement comes as news polls are showing that Latino voters may not be as eager to cast their vote for him this November as they overwhelmingly did in 2008. The news also comes as we await the U.S. Supreme Court ruling on Arizona’s SB1070 — a ruling expected to further bolster state-level policing and racial profiling of immigrants.

To be clear, this is not legalization. This policy will provide temporary relief from deportation for hundreds of thousands of young immigrants. Sadly, many will miss this opportunity; younger siblings and parents can still be deported. This will not end the record-level deportations – over 400,000 people a year — by the Obama Administration. The president even reaffirmed his commitment to immigration enforcement, including having “more boots on the ground” at the U.S.-Mexico border than any other administration. Numerous enforcement initiatives continue to identify, detain and deport as many undocumented immigrants as possible. While the Administration repeats that it is only seeking out the “most dangerous criminal” immigrants, we know that people who are caught driving without a driver’s license are being deported, as is an immigrant parent who has re-crossed the border in order to reunite with children here in the U.S.

Last August the Administration had announced in another enforcement reform that it would use “prosecutorial discretion” to provide an opportunity for “low priority” immigrants with deportation orders to have their cases reviewed and deportations deferred. Since then, less than two percent of the reviewed cases have been closed, and community members continue to be detained and deported, raising concern about the promise of today’s announcement and the actual implementation.

Under this process, young undocumented immigrants must apply for eligibility, including submission of fingerprints. The deferred action from deportation, which will be considered on a case-by-case basis, lasts for two years, when it will expire and a renewal request may be made. Those granted the deferral may apply for work authorization, to be granted “based on economic necessity for employment.” Given the punitive enforcement environment, there will certainly be well-founded fears about coming forward to request deferred action, and there will be a need for widespread community education about this policy. It will also require vigilant monitoring as it goes into effect to ensure that it is done fairly.

The announcement is sure to draw fire from the Right. Congressional Republicans have held up passage of the DREAM Act for years, and even during Obama’s Rose Garden statement, a heckler in the audience was shouting about these immigrants taking jobs away from Americans.

According to the Department of Homeland Security fact sheet, in order to be eligible for deferred action from deportation, individuals must:

The serious misdemeanor offenses could include such violations as one DUI, one marijuana possession, domestic violence or an assault charge.

As significant as this development may be, the need to provide formal relief from deportation — and the opportunity to legalize status — remains for over 10 million other undocumented people in this country. This deferral from deportation is not legislated, and as such, can be taken away by administrative action. Immigrant workers, families, communities will not be safe and economically viable without legislated immigration reforms that provide fair avenues for legal status and which will remove the punitive enforcement programs that continue to traumatize communities and separate families.

From National Network for Immigrants and Refugee Right

To read the official note from ICE go here: http://www.nnirr.org/~nnirrorg/drupal/sites/default/files/dhs_immigration_fact_sheet.pdf