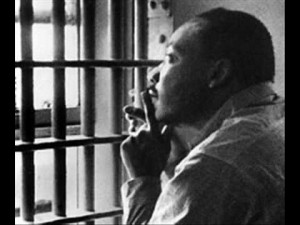 LOUISVILLE – Representatives of Christian Churches Together (CCT) — a fellowship of 36 denominations and six national organizations representing a large spectrum of Christians — has issued the first known formal clergy response to the Rev. Martin Luther King, Jr.’s 1963 “Letter from Birmingham Jail.”

The statement came at the conclusion of CCT’s annual meeting in Birmingham, AL Jan. 11-14 and was issued just before the federal Martin Luther King Jr. holiday on Jan. 17. Among the signers of the statement was the Rev. Gradye Parsons, stated clerk of the Presbyterian Church (U.S.A.) General Assembly.

In a press release accompanying their statement, CCT leaders say they “remember with gratitude the sacrifices of the leaders of the civil rights movement, who demonstrated the power of Christian, nonviolent action.”

They also express repentance that “some of us have not progressed far enough beyond the initialmessage from the Birmingham clergy” to King that prompted the late civil rights icon to write his famed letter. In their “Call for Unity,” those clergy appealed for restraint and “common sense,” and a withdrawal of support for the civil rights demonstrations going on at the time in the south.

CCT was born in 2007 to create a broader ecumenical forum than existed prior to its formation. It’s primary foci are church unity, evangelism and “examining poverty through the lens of racism.”

In addition to Catholic, Orthodox, Protestant, Historic Black, and Evangelical/Pentecostal “families,” it includes the American Bible Society, Bread for the World, Evangelicals for Social Action, Habitat for Humanity, Sojourners, and World Vision.

The full text of the group’s statement, dated Jan. 14:

A letter from Birmingham

We have gathered this week in Birmingham as representatives of the churches and organizations that make up Christian Churches Together (CCT). We came to examine poverty through the lens of racism.

After experiences at the Civil Rights Institute and the Sixteenth Street Baptist Church, we have felt compelled to make a response to the “Letter from Birmingham Jail.” Dr. Martin Luther King Jr.’s famous letter was an answer to a message from a group of clergy in Birmingham. So far as we know, no one has ever issued a clergy response to Dr. King’s letter.

Remembering. We begin by expressing profound gratitude to the leaders of the civil rights movement whose sacrifices have moved us closer to God’s justice. Those leaders and thousands who followed their lead accomplished more than many could imagine, and demonstrated the power of Christian, nonviolent action. We celebrate the remarkable strides made through their courageous witness.

Repenting. We recognize, however, that some of us have not progressed far enough beyond the initial message from the Birmingham clergy. Though virtually all our institutions have formal statements against racism, too often our follow-through has been far less than our spoken commitments. Too often we have elected to be comfortable rather than prophetic. Too often we have chosen not to see the evidence of a racism that is less overt but still permeates our national life in corrosive ways.

Renewing. Though chastened by the unfinished nature of the work before us, we are inspired by the witness we saw reflected in both the history and the present-day ministry of the organizations we have visited in Birmingham. Dr. King’s letter speaks powerfully to us today, even as it did in 1963.

We remember two windows in the Sixteenth Street Baptist Church. In one window, the face of Jesus had been blown away by the bomb that murdered four girls in 1963. The other window, a gift to the congregation after the tragedy, depicts a Christ figure who with one hand rejects the injustice of the world–and with the other extends forgiveness.

In the spirit of this loving Jesus, and in the spirit of those who committed their very lives to that love, we renew our struggle to end racism in all forms. We begin by taking time on Monday, January 17, to reread the “Letter from Birmingham Jail” – along with the message from the Birmingham clergy that prompted Dr. King’s letter – and to reflect on its meaning for us today. We urge all within our churches to join us.