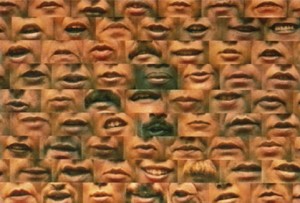 This prayer was done at the World Mission Conference 2009 by the PCUSA and it has in mind a large room filled with tables where people are seated around. You can use it and adapt to your own context.

Congregation moves to the left tables singing a Kyrie

Si Senhor! The land of the free and the home of the brave is the new Shinar. Long ago people said: Let us go to that land and find a home and live free. So people went there and found a place to stay, to establish their homes and grow their children. Then other people went after them to do the same and then others and even more people went after them. After a while, the new generations thought they were the only ones who could live in that land and they decided to stop people from keep going to Shinar. They said: ‘Come, let us make a high wall that will go from one side to the other of our nation and stop people from coming here.’ And they had money for the wall and had illegal immigrants to build the wall for them. Then they said, ‘Come, let us build ourselves a city of our own with no strangers, let us rebuild the twin towers with its top in the heavens, and let us make a name and a empire around the world for ourselves. For they said: ‘otherwise, people will come to us and take our jobs and bring diseases, destroy our economy and rip apart our values. Let us raise this wall up to the heavens as a praise to God who keeps our name from being effaced from the face of the whole earth.

Si senhor! Mientras los muros seren erigidos arriba, my cerca, abajo un poco, another country is right now locked into the confusion of its own language. Si senor! In Colombia se habla espanol, pero hay there mucha confusion. No hay muros pero there are 4 million people internally displaced, in a stat of no people’s land. Dios Santo! Que pasa? Oremos al Senor! “Senor, who has heard and even believed the things that Colombia is going through right now? And to whom has the suffering of this people been revealed?

For this country’s tragedies are growing up before us like a hidden plant, and like a cursed root out of dry ground;

Colombia has no appeal form or majesty that we should consider or pay attention to, nothing in this country’s appearance that we should desire but on the contrary to fear and stay away as much as possible.  Colombia has been despised and forgotten by others; a country of many troubles, and we reputed them solely as a country of drug dealers, corruption, violence and enfermedades, very much acquainted with the despairing issues and unbearable pains of our times; Si senhor! Increible! Mira vos! A country from whom we and others hide our faces, since there is so much going on elsewhere in the world that we held Colombia of no account.”

O God, according to your steadfast love; for we didn’t complain enough and let this wall be raised without much ado; and now, we don’t even remember the wall is there anymore. Perdonanos senor! Have mercy on us, O God, according to your steadfast love; we weep for the migrants around the globe and especially for the four million people displaced in Colombia. Perdónanos for we have considered Colombia a country of drug dealers without looking at out own backyard, without considering that countries in the north are the great drug consumers… Perdónanos as we don’t remember that Colombia is home of the Western Hemisphere’s greatest humanitarian crisis. Perdónanos senor! Perdónanos senor! Perdónanos senor!

Salam! Once we thought everybody spoke English. And we went around the world saying peace, peace!! But nobody could hear us. Peace? People replied to us, “your country has done difficult things to my country and you come here and say peace?!” We then asked for forgiveness trying to say that Jesus Christ was our love and our best way to love them. But still, they couldn’t understand us. We even tried to learn Spanish, Swahili, Portuguese, Chinese and kechua. And still, we felt they were not getting us right. How come they cannot get us, our message, our willingness to help, our selflessness to come live with them and our humble attitudes? we asked ourselves… As we were pondering about these questions we heard: “And God said, ‘Look, they think they are one people, and that they have all one language; and this is only the beginning of what they will do; nothing that they propose to do will now be impossible for them. Come, let us go down, and confuse their language there, so that they will not understand one another’s speech.’ And from then on we were left in this confusion. So much so that some of us got burnt out, others’ have lost their passion for mission, others have had family crisis, and even others left the faith altogether.

However, by the power of God’s Pentecost we started to change things around our missiological approaches, our theologies and our perspectives. When we realized that we were together with other people to combat poverty, illiteracy, corruption, illnesses, violence and hunger, they finally started to hear and they started to reply to us: Namaste! Salam! Paz! Salaamata! Lape! Kev tiaj tus! Mir! Shalon! Even some said peace!! peace!!

Since we left the garden of good and evil, we are a wanderer people. We walk and move and go places. Why? Sin? DNA? God’s call? God’s demand? A certain unquiet displacement in our hearts? Love of the world? Obedience to God’s word? The Bible says: God has scattered us all. And since then “we are going, heavens knows where we are going…” And we never know where we will end up until we realize where we are. Then, for better or for worse we learned to pray: thanks be to God!

Walking and moving, networking, empowering people where they are, sharing life, food, sacred texts, Jesus Christ, stories and combating injustice, violence and death around the world, we missionaries have always lived, live and will always live under the tower of Babel as keepers of our sisters and brothers here and elsewhere, as keepers of this world so loved by God. As missionaries we move around the globe because we can choose to travel, and have a place to come back any time we want and/or need. As missionaries we are moveable people who have to have eyes for those who move and those who cannot move.

And we pray… “At airports, border patrols offices, embassies, and countries entrances, we stand on line weeping… we weep because for some very unjust reason, we are able to carry a valid passport and money while millions of people don’t have documents, credicards, passports or identities and cannot move to find a better life, to be involved in any mission, to sustain their families or just hide from violence, death treats and wars. We weep for those who try to move between nation state borders and are put in prison, abused and even killed. We weep for kids left alone, for parents who leave their kids unassisted because they have no choice, for families who are dismantled, for unnamed women abused, violated and trafficked. Have mercy on us, O God,
according to your steadfast love for we can travel and so many cannot…;