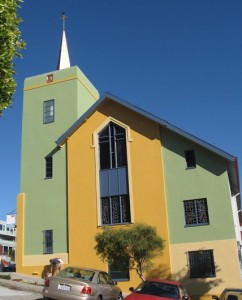 Thanks to the Episcopal Church Foundation, I was given the opportunity to create a video to share some of things we are learning at St. Cyprian’s as we seek to connect with our vibrant urban neighborhood. We hope the tips shared in “10 Ways to Engage Your Neighborhood” will inspire other churches to engage their local contexts. We may be in San Francisco, but as an elder Episcopal Bishop once said about us, we have lots in common with churches all over the Anglican Communion.

St. Cyprian’s is rooted in African American and Caribbean experiences and founded in the early 20th century or late 19th Century (our story begins with Christ Mission to Colored Peoples, founded by Peter Williams Cassey in the 1870s). We will celebrate our 90th anniversary in San Francisco as St. Cyprian’s in April 2013. For a good part of our history, St. Cyprian’s congregation members gathered for worship in other people’s church buildings (Grace Cathedral, Church of the Advent, St. Stephen’s) and for a time in a converted house. In 1960, amidst sweeping societal changes, our current building was built with much hard work and determination. Rummage sales and barbecues helped pay off the mortgage, and people across the country helped furnish the building by collecting green stamps and sending them in via the US Postal Service–where a number of our members happened to work.

When I arrived as Vicar a little over three years ago, there was great pride and attachment to the physical building itself among the church’s membership, despite quite a bit of deferred maintenance and relatively little connection to the surrounding neighborhood. After many conversations with long time members and neighbors, as well as Diocesan leaders, we discerned that hiding out in a small circle behind locked doors was not an option if we truly wanted a renewed life on the corner of Turk and Lyon. As we connected with our neighbors we learned that there were few community gathering places in our immediate neighborhood aside from restaurants, nightclubs and bars. We also discovered shared commitments to ecology and the arts.

As neighbors joined the congregation, stepped into leadership and began helping us repair and beautify the building, longtime members developed greater trust and affection for the strangers around us. Three years ago, the doors of our church were open twice a week on Sunday for worship and Saturday for a large AA group. Today, the church doors open nearly every day of the week to allow folks to gather for a wide array of meaningful activities. Neighbors occasionally call clergy and lay leaders to wonder where we are when we happen to miss a meeting or event. We’re so busy that in partnership with our neighbors, we’re creating a community center we call Cyprian’s. Much like our complicated wandering visionary biblical ancestors Abraham, Sarah and Hagar, we’re finding ourselves pregnant in our old age—ready to give birth to possibilities, blessings and hope.

When asked how I’d like to share my learnings as an ECF Fellow, the idea of making a series of videos emerged.

Being new to videomaking, I used a free program on YouTube to create this short presentation. While this first video is modest, I hope to explore some other approaches to video production in the next ones I make for ECF. Put this in the ever-growing filing cabinet labeled, “things they didn’t teach me in seminary.”