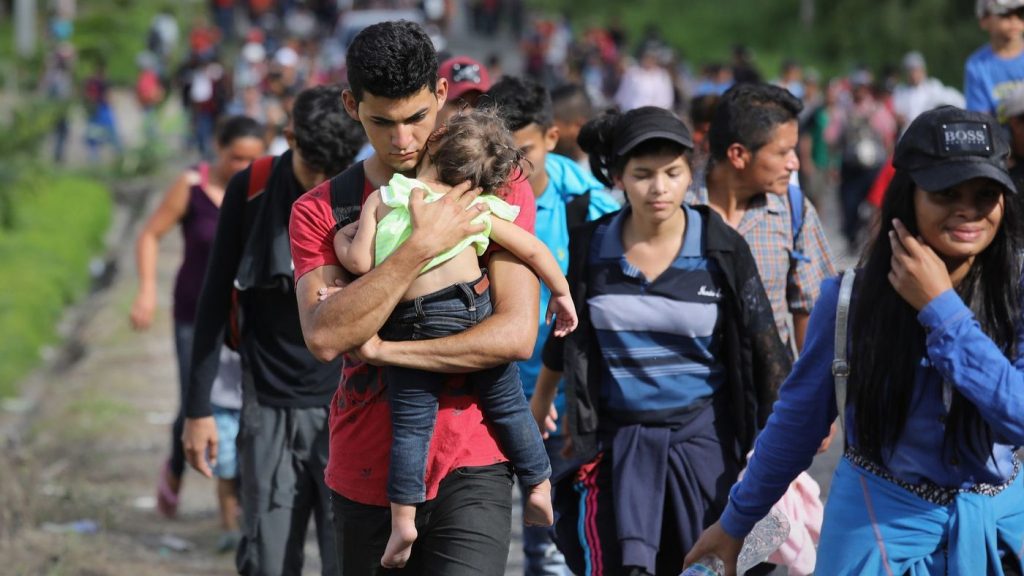 The Asylum Seekers/Immigrants Are Coming! God save us!

The initial caravan of precious people, about 7000Asylum seekers that has dwindled in its numbers now, mostly from Honduras, El Salvador and Guatemala, are coming! Or we should say the mob of immigrants, or the onslaught, the assault, the attack of dangerous immigrants coming to destroy the United States one and for all. Our super militaristic country is now at the mercy of these immigrants. Thank God we have a strong president now!

The danger is such that the president of the United States has issued 800 Army Troops to protect the borders against peasants, mechanics, embroiders, tortilla makers, shoe shining boys, fathers, mothers, children, and teenagers. They are now calling these asylum seekers and immigrants seekers a “National Emergency.”

On the one hand, the Empire cannot help but act as an Empire with a rhetoric of fear, of danger, of sanctified violence with army and brutality. The rhetoric of fear entails, among other things: asylum seekers and immigrants are violent mobs, they are Midwesterners, (meaning Muslims); we have to protect our people, our borders are weak, they are going to steal our jobs, bring diseases, our American dream is at risk.

On the other hand, immigrants and asylum seekers cannot help but act as immigrants and asylum seekers, migrating around the globe and running away in search of some form of safety and basically survival. Immigrants go where resources and money are. Some people from Venezuela went to Brazil searching for shelter but the lack of state provision is such that regular people kicked Venezuelans out of the Brazilian borders threatening them to kill them if they stayed. Immigrants go where they think they can find life. 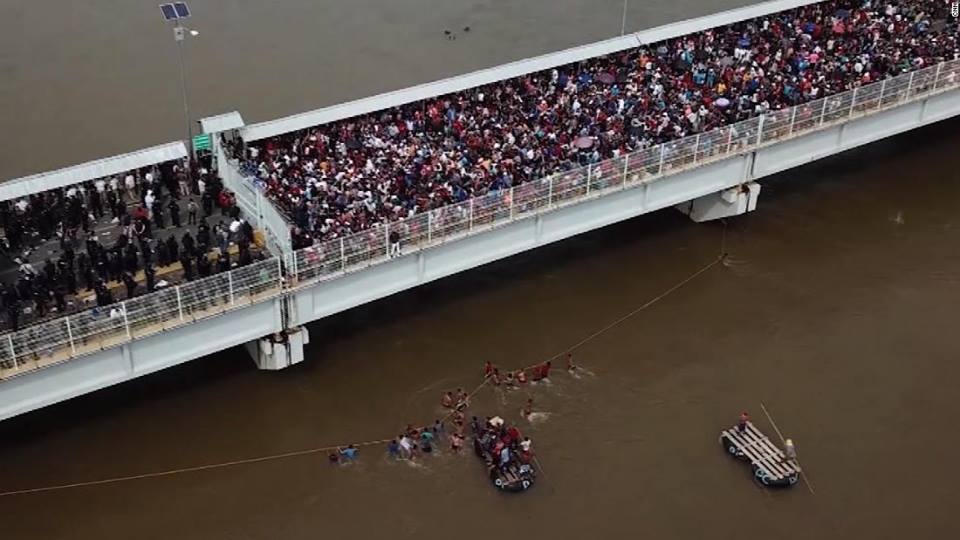 A humanitarian crisis should be treated as what it is: humanitarian crisis, not as military or state danger that often entails prescriptions of armed police and brutality. But this country cannot think about whypeople are coming. The United States cannot think that this caravan is just one of the results of long-standing policies on drug, broken immigration laws, exploitation of natural resources, cheap labor and military intervention in these countries through the School of the Americas, now renamed as Western Hemisphere Institute for Security Cooperation. Under the motto Libertad, Paz y Fraternidad (Freedom, Peace, and Fraternity), this school trained armed forces of Latin American countries to combat communism and support US power and dominance against their own people. Now history is charging this country with its own bills of neocolonial destruction.

The current nationalist rhetoric in the US pivots away from brownness to construct a reality of pan-criminalization for all racialized brown bodied people. Today in the US, to be brown bodied is to be a Muslim-immigrant-mexican-terriorist-raptist-low-skilled-drug-dealer-illegal-dependent-animal. With the current exodus of Central American asylum seekers—admitting that they are so much more than this category—brown bodied people are in position of being annihilated through state sanctioned genocide. Arriving to this point has been a process of careful plotting and hidden maneuvers within the legal domain. Slowly this genocide of brown bodied people has grown through the expansion of immigration detention, mass raids, and deportations.

For many years, Central American people who couldn’t find jobs or were met with violence, migrated to US looking for better life. With kids growing up in the US in places where gangs were the daily life of teenagers, they also learned how to organize themselves to survive in this new land. With the ongoing broken system of immigration laws and the massive deportation from US, these kids were sent back to their countries, a place they have never been and some barely spoke the language. Back “home” these kids had to deal with this new displacement and new forms of survival started to happened through the same structure of gangues. Now these gangs are alternative powers to the State and control the lives of so many people.

There are cases and cases of violence against poor people in these countries who are threatened to serve the gangs or else. Without the protection of often corrupted governments, people come to a point of powerlessness where they actually have no choice but leave their homes searching for some form of safety anywhere.

Why then are they coming? Because they have no other choice. Any country around them can offer something that they can rely on. They cannot get on an airplane and fly to Brazil. But they can walk to the US. That is their form of resistance and resilience. If your family were threatened to death or rape or any other form of abuse or violence you would do the same. Have you seen the movie John Q with Denzel Washington? John’s son needs treatment for cancer but he didn’t have the money to pay the hospital. Health insurance denied his coverage. He decided to rob a bank to get the money to pay for his kid’s health. Was he wrong? Would you choose differently? 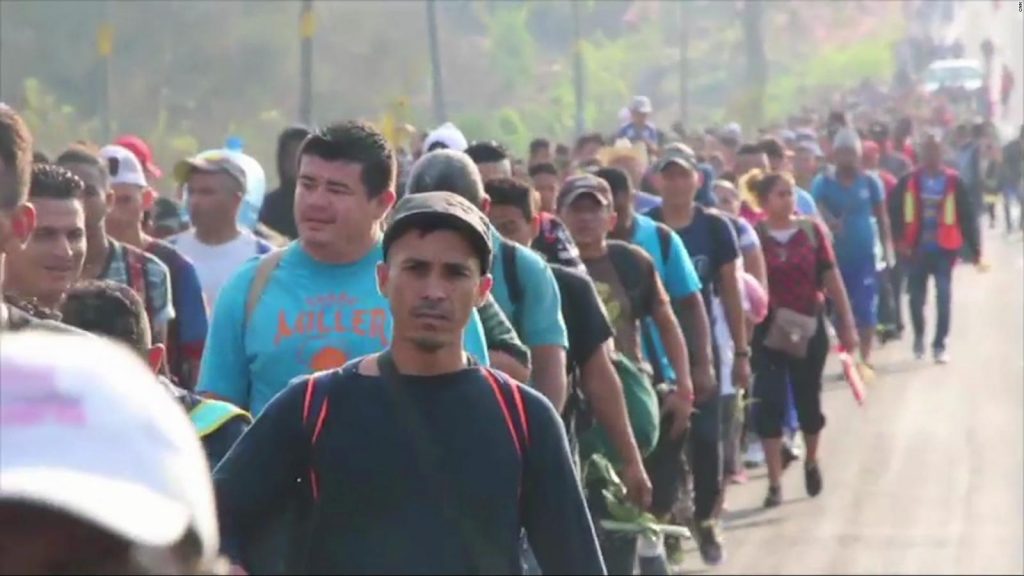 The Northern Triangle Guatemala, Honduras, and El Salvador, represents one the most densely Christianized regions in Latin America. How does this factor into our assessment of their asylum-seeking migration? The causes for migrating have multiple contours ranging from domestic violence to neoliberal monopoly capitalism. Yet if we consider their faithas a sign of their individual agency, their vulnerability is less susceptible to self-seeking humanitarian entrepreneurs and violent nativists. Their everyday lives bear witness to life-making activity that often goes unregistered in the ruling narrative. Not only is their faith integral to theirresistance, but more importantly it is sustaining their strength along the journey. Despite the hostility and vitriol nationalist rhetoric, their movement northward contains courage, intelligence, spirituality, and faith commitment.

United States citizens should only be concerned about these immigrants with regards to providing good hospitality and offers of well-being to them. Beyond these acts, they should be concerned with their congress people who are stealing money from the poor and giving to the rich, destroying affordable health care, dismantling medicare/medicaid and eliminating social security. They are the mob of the onslaught destruction of our common lives. Don’t be mistaken: empire wants to divide us against each other. Our enemies are not the immigrants, or the refugees but the politicians who are taking away everything from the common American people and giving it to its few billionaires. There is never a “National Emergency” in regards to the poverty situation of our people, to the lack of health care of housing options, or the killings and imprisonment of blacks folks.

Moving the narrative away from the pan-criminalization of brownness requires a counter vision whereby a racialized caravan is converted into the sacred Other. The violence this cloud of witnesses receives, whether state sanctioned or not, all brown bodied people are next in line, both citizen and non-citizen alike. Their genocide will be my genocide, their starvation will be my starvation, their deportation will be my deportation, etc., etc. etc. 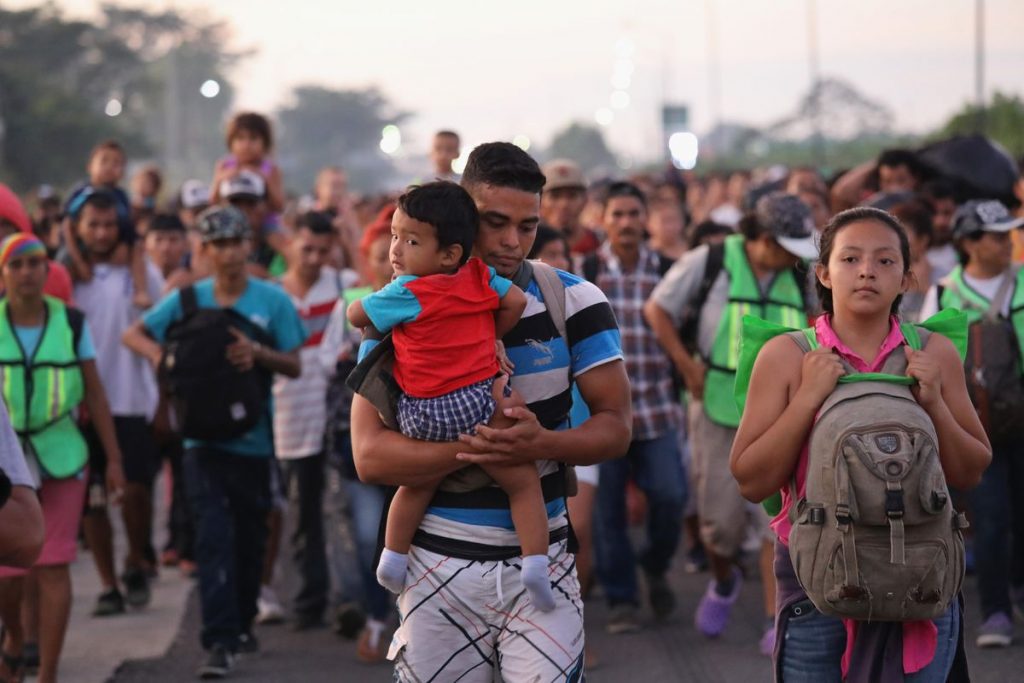 As Christians, we are already prepared for our response. First, our baptismal vows demand us to care deeply for all of these Christian children of God. Second, our love to God demands us to love our neighbors no matter their faith. There are no fences in the Christian faith unless there is injustice. No walls! No separation! All are welcome.

Our prayer will be: God save us! Not from these immigrants but from our congress people! As for the immigrants, we repeat God’s words through Moses in a slightly different way: “Let my people come.”